A provision in the federal pandemic relief law disallowing states from using relief funds to "directly or indirectly" cut taxes or else risk losing money is unconstitutional, 74 Republican members of Congress told a federal court Friday. 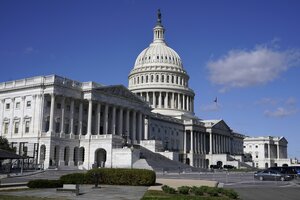 States that don't comply with the American Rescue Plan Act's tax-cutting prohibition are required to return their share of the $350 billion the relief law gives to state and local governments. (AP Photo/Patrick Semansky)

In an amicus brief for the state of Ohio that was filed in the Ohio federal district court, the 74 Republicans said the U.S. Department of the Treasury had far exceeded its authority by placing the state tax provision into the American Rescue Plan Act

. President Joe Biden signed the ARPA on March 11, and on March 17 Ohio sued the Treasury asking the court to block the provision. Seventeen other states, all with Republican attorneys general, have also sued Treasury over the same requirement, known as the clawback provision.

In the Ohio lawsuit, Ohio Attorney General Dave Yost asked the court to enjoin the U.S. Treasury and its secretary, Janet Yellen, from enforcing the provision of the ARPA that prohibits any state from using federal aid "to either directly or indirectly offset a reduction in the net tax revenue."

States that don't comply with the provision are required to return their share of the $350 billion cash infusion the relief law gives to state and local governments in the amount that is lesser of the net tax reduction amount or all federal funds received by the state.

Yost said the provision would unconstitutionally constrain Ohio and its sovereign taxing authority by effectively coercing the state to accept the restriction, since Ohio alone is entitled $5.5 billion in federal funds — equal to 7.4% of the state's total expenditures in 2020.

The amicus brief for the 74 Republicans was authored by Jay Alan Sekulow, who defended former President Donald Trump in his first impeachment trial and is chief counsel of the American Center for Law & Justice, a conservative Christian law group.

In a statement Friday, the ACLJ said it agreed with Ohio that the provision is unconstitutional and sets out to usurp state taxing authority.

"To put it simply, while Congress may condition funding provided to the states, it may not do so in a way that is coercive or that commandeers an authority reserved to the states," the ACLJ said.

The provision "clearly runs afoul of these boundaries," the ALCJ said, because even a tax change indirectly offsetting ARPA funding could trigger a clawback of funds, it said.

In the brief, Sekulow wrote that the clawback provision exceeds Congress' power under the spending clause of the U.S. Constitution. The brief also refers to the provision as the "tax mandate."

Similar briefs were also filed Friday by the National Taxpayers Union Foundation and by the U.S. Chamber of Commerce and the National Federation of Independent Business Small Business Legal Center. Both seemed to agree with the brief of the members of Congress, with the NTUF saying the clawback provision is "either void for vagueness or unconstitutionally coercive" and the chamber and NFIB brief saying it is "an unconstitutional incursion" and "will have dire consequences" if allowed to stand.

The National Taxpayers Union Foundation earlier sent Yellen a letter asking her to provide guidance on eight points regarding the clawback provision. In a statement dated Wednesday, the Treasury clarified one of the points, saying that a state that takes a tax action only to conform with a provision of the federal revenue code or federal tax law would not trigger the clawback of ARPA funds.

The Treasury did not immediately respond to a request for comment.

The U.S. Treasury is represented by Stephen Ehrlich, acting inspector general of the Department of the Treasury.

The members of Congress are represented by R. Jason Howard of the Howard Law Office and by Jay Alan Sekulow, Stuart J. Roth, Andrew J. Ekonomou, Jordan Sekulow, and Benjamin P. Sisney of the American Center for Law & Justice.

The National Taxpayers Union Foundation is represented by Christopher A. Holecek of Wegman Hessler LPA and by Joseph D. Henchman of the NTUF.