The employee retention credit could provide some businesses much-needed relief, but before claiming the credit employers should be aware of its requirements, the interplay with Paycheck Protection Program loans, payroll filing options and potential delays with amended payroll forms. 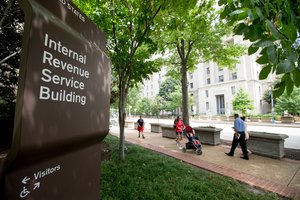 The IRS recently released guidance for employers claiming the employee retention credit that clarified retroactive changes to the credit for tax year 2020 and explained how employers who received a Paycheck Protection Program loan may claim it. (AP Photo/Andrew Harnik)

provided a refundable 50% payroll tax credit for up to $10,000 in qualified wages for employers that had businesses partly or completely shut down or faced a significant decline in gross receipts between March 12, 2020, and Jan. 1, 2021.

While the statute made PPP loan recipients ineligible for the credit, the Taxpayer Certainty and Disaster Tax Relief Act of 2020

, passed in December as part of the Consolidated Appropriations Act, amended the CARES Act to strike that provision.

On March 1, the Internal Revenue Service issued a notice

that clarified retroactive changes made to the credit for tax year 2020 and separately explained how employers who received a PPP loan may claim it.

The Relief Act also expanded the credit for 2021 so employers can claim a refundable tax credit equal to 70% of qualified wages paid after Dec. 31, 2020, through June 30, 2021, with wages limited to $10,000 per employee per calendar quarter in 2021. However the employee retention credit changes for 2021 weren't addressed until early April, through another notice.

Here, Law360 examines four factors that businesses should be aware of when deciding whether and how to claim the credit for 2020.

Employers can qualify for the employee retention credit either by having a significant decline in gross receipts or by experiencing a partial or full suspension of operations due to a government shutdown order. According to a June update to a set of FAQs, partial suspension occurred if more than a nominal portion of operations were suspended by a shutdown order, but the FAQ did not define "nominal."

The IRS' March notice clarified that a significant decline in gross receipts occurs during a calendar quarter when a business' gross receipts are less than 50% of what they were in the same quarter of the previous year.

The notice also explained an employer experienced a suspension of more than a nominal portion of business operations during a calendar quarter if gross receipts from a shut-down operation were not less than 10% of total gross receipts during that same quarter in 2019. The test can also be met if the hours of service performed by employees on a shut-down business operation were not less than 10% of the total service hours performed during the same quarter in 2019, the notice said.

Determining whether a business qualifies for the employee retention credit under the gross receipts test is relatively straightforward, but making the same judgment for the shut-down operations test is significantly more complex and could come under IRS scrutiny, according to Adam Markowitz, enrolled agent and vice president of Howard L. Markowitz PA CPA.

One example of a business that meets the test, Markowitz said, is a client who has a wellness shop that was closed down for a period of time. It was later allowed to open but could not provide massage services. The massage services accounted for more than 10% of the business during a calendar quarter in 2019, meaning more than a nominal portion of operations was affected, so the wellness shop qualifies for the employee retention credit, he said.

If a business operated in multiple states with different shutdown orders in 2020, the business would look at the percentage of operations in each state affected by the respective shutdown order to figure out if it meets any of the ERC tests, Markowitz said.

Since ERC eligibility can become complicated very quickly, companies must be careful when deciding to take the credit, he said.

"This is why you need to send your tax guy or gal alcohol this year," Markowitz said.

PPP loan recipients can now make use of the ERC, but businesses need to avoid double-dipping by ensuring payroll expenses paid by PPP loans aren't also used for the credit.

The IRS' March notice said that for 2020, the wages that were paid for and forgiven by the PPP cannot also be counted for the ERC. A PPP loan is forgiven when a company submits one of three forms to the lender indicating payroll and nonpayroll costs that the loan was used to pay, according to the Small Business Administration.

Businesses need to figure out how much of their PPP loans went toward paying wages in order to maximize use of both the PPP and the ERC, according to Amie Kuntz, a CPA and manager at RubinBrown.

"One opportunity in maximizing the PPP and the ERC is [that] you want to push as much as you can of nonpayroll costs for overlapping periods to the PPP to leave room for utilizing wages for the ERC," Kuntz said.

PPP loans allow for 60% of the funds to go to payroll costs and 40% to go to nonpayroll costs such as rent and utilities. Unfortunately, before the rules changed, many businesses simply allocated PPP loans toward payroll for administrative ease since they thought they could not use the ERC, Kuntz said.

Companies that already applied for and received PPP loans need to evaluate how they allocated their costs so they don't accidentally take the ERC for wages that have already been applied toward PPP forgiveness, she said.

"You generally want to maximize your cash flow with the PPP first," she said. "So to get full forgiveness you have to spend on eligible expenses: payroll, utilities, rent and mortgage interest."

Going forward, companies should review for overlapping PPP and ERC periods and review expenses within that time frame, Kuntz said. Then a business should apply as much as possible toward nonpayroll expenses for the PPP and then review payroll costs that are not eligible wages for the purposes of the ERC and vice versa, she said.

"It's likely going to take a spreadsheet because it's a bit of a puzzle, but you can get there if you understand the rules," Kuntz said.

The employee retention credit serves as a refundable payroll tax credit that is applied to the 6.2% portion of the Social Security payroll tax paid by the employer. Businesses should evaluate which of the three ways to claim the credit is best for them, because each has different pros and cons, according to Ruth M. Wimer, a tax partner at Winston & Strawn LLP.

The first way for an employer to claim the credit is to simply hold back its portion of Social Security tax deposits when sending out payroll, but this method can be risky because an employer could calculate the credit incorrectly, Wimer said.

How this would work, she said, is if the employer qualifies for a credit worth $1.2 million and calculates it owes $1 million in employment taxes for 2020, the business would keep the $1 million and carry over the additional $200,000 to the next quarter. But if the employer miscalculates its employment tax liability, the IRS may impose a penalty for failure to deposit payroll taxes, which can be 2%, 5% or 10% of the amount, depending on the length of noncompliance, Wimer said.

"This is the method most employers would want, but as an attorney I'd say it causes me anxiety because if the employer made an error they could have failure-to-deposit penalties," she said.

"That would appear to be difficult from an administrative perspective, to keep accurate the accrual of the retention credit with the periodic deposits of employment tax," Wimer said.

The amount of the credit that can be requested as an advance is also limited, Wimer said. For example, in 2020 the amount of the advance may not exceed 70% of the average quarterly wages paid by the employer in calendar year 2019.

This is the best way to get the credit because the Form 941 includes a line item for the retention credit that is owed and the government sends a check for any overpayments, she said.

"Use of the Form 941 allows the taxpayer to review the entire quarter's information regarding the amount of the credit at once and have assurance that the threshold requirements were met, rather than working piecemeal during the quarter as each payroll is processed," she said. Form 941 has thorough instructions, she said, and there are no failure-to-deposit penalties.

Many companies may have missed out on claiming the ERC if they took out PPP loans, since they did not know they were eligible. However, if companies decide to amend their payroll tax forms to utilize the credit they should manage their expectations on receiving funds, according to Kristin Esposito, director of tax policy and advocacy at the American Institute of Certified Public Accountants.

Most employers have already filed their Forms 941 for the fourth quarter of 2020 since they were due at the end of January, so their only recourse to claim the ERC is to file an amended Form 941-X, she said. This is problematic because while Form 941 is an electronic submission, the Form 941-X can only be filed by paper, and paper filings are taking longer for the IRS to process due to the coronavirus pandemic, Esposito said.

Esposito said she was unaware if anyone had received the fourth quarter credit yet, but she was worried about the paper filings due to the current mail backlog at the IRS.

"This is just part of the mix and is just going to increase their backlog," she said. "That means getting stuck in a pile at the IRS, and people aren't getting their money."

The IRS and U.S. Department of the Treasury did not immediately respond to questions.