A state circuit court judge Wednesday questioned the need of a proposed class of Missouri individuals for a temporary restraining order to undo St. Louis' rules on non-city resident tax refunds for days worked outside the city. 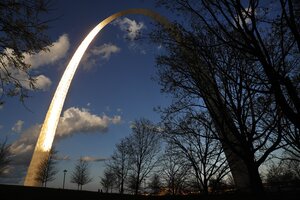 A proposed class of Missouri individuals has asked a state circuit court to undo St. Louis' rules on non-city resident tax refunds for days worked outside the city. The setting sun reflects off the north leg of the Gateway Arch in St. Louis. (AP Photo/Jeff Roberson)

The nonresidents asked the court for an order and preliminary injunction against the city and its revenue collector, Gregory Daly, to undo the limits on nonresident refunds of the city's 1% earnings tax that the nonresidents argue are unlawful and unconstitutional by removing new document requirements for refund requests.

However, in a virtual hearing, Judge Christopher McGraugh questioned the need for such an order, seeming to side with arguments by Daly's counsel that the nonresidents could seek relief absent an order by simply protesting the taxes directly, and that several of the nonresidents appeared to have done so.

"I haven't found one case that says that's not the proper way to get a refund for taxes either paid or improperly withheld," Judge McGraugh said.

In their motion filed in April, the individuals asked the court to remove the new document requirements, arguing that the unconstitutional treatment would irreparably harm them and did not serve any public interest.

The case stems from a complaint filed in federal court March 29 by Boles, Oar and Semonski, who say they were denied tax refunds for 2020 after Daly issued new guidance and required additional documentation that effectively refused refunds to individuals teleworking outside the city.

They argue that distinguishing between nonresidents working outside the city and those traveling outside the city for business purposes was an arbitrary distinction without rational basis and that the city continues to violate their individual rights by denying refunds for tax already paid through withholdings by their employers.

The arguments presented in the latest request are similar to those rejected by the federal court after Daly told the court that it lacked subject matter jurisdiction to reach the merits of a dispute involving state taxes. The nonresidents subsequently refiled the challenge in state court, which Mark Milton — who represents the individuals — previously told Law360 will avoid arguments related to subject matter jurisdiction.

Boles, Oar and Semonski seek to represent a class of nonresidents of St. Louis whose employers withheld the tax and paid it from Jan. 1, 2020, onward and who have been denied similar refund requests. Stein is also seeking to represent a separate class of similar nonresidents who have either not yet submitted a request or not sought a refund for days teleworking.

At the hearing, Bevis Schock, who also represents the individuals, reiterated previous arguments and told Judge McGraugh that the motion was properly requested because it was unclear if the individuals could seek alternative relief by formally protesting taxes withheld more than a year ago.

David H. Luce, counsel for Daly, responded that the individuals and other nonresidents could still file protests with the commissioner, even for taxes paid through withholding.

"We hear all this talk about 'they can't get their claim in front of the collector.' Three of these plaintiffs have done just that," Luce said.

Luce also urged Judge McGraugh to dismiss the decision of one of the individuals to not file a protest for days spent teleworking, saying that by failing to do so, the individual is "opting not to avail himself of that remedy of law at the earliest stage."

Judge McGraugh echoed those arguments, telling Schock that it was unclear that the new forms put out by Daly caused public confusion or dissuaded individuals from filing protests, as Schock asserted.

"It seems to me that, when you have a form that says 'we're not considering telemarketing'… that seems to be putting them on notice to file a protest," Judge McGraugh said. "Your clients knew to do that."

When discussing scheduling matters of the case, Judge McGraugh also suggested that denying the motion for a temporary restraining order could also give the public notice that Daly is excluding teleworking from refund claims.

The lawsuit was originally brought against the city under the administration of former Mayor Lyda Krewson, who was replaced by Mayor Tishaura Jones on April 20.

Daly spokeswoman Susan Ryan told Law360 that individuals have 12 months from the extended tax filing deadline of May 17, 2021, to file a protest for taxes withheld in 2020 and that individuals shouldn't be surprised by the new forms, which were announced in November.

"There's a process in place already that says that if you believe your employer withheld taxes that they shouldn't have withheld, you have a process to protest that," Ryan said. "There is a remedy in this case, even if an employer over-withheld."

Nick Dunne, public information officer for the mayor, told Law360 that the individuals "did not avail themselves of the legal remedy that the city offers," adding that "I really think it's cut-and-dry."

Speaking to Law360 afterward, Milton said it was unclear before the hearing if individuals had to protest taxes at the time of withholding and that "from our perspective, one of the big takeaways was the collector conceding these refund claims or refund forms constitute a valid protest."

Milton said that if their motion is denied, they will encourage other individuals to similarly seek refunds for days spent teleworking and add them to their proposed class to argue that the tax is unconstitutional.

"If you're saying that you'll accept this as a protest, we'll just go on a [public relations] campaign to get as many people to file them as possible," Milton said.

Boles, Oar, Semonski and Stein are represented by Mark Milton of the Milton Law Group and by Bevis Schock.

The city of St. Louis is represented by Michael A. Garvin and Robert H. Dierker of the city counselor's office