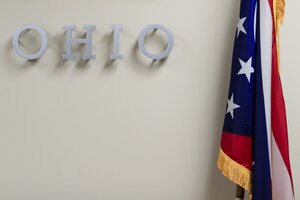 U.S. District Judge Douglas R. Cole found that the court has jurisdiction and that Ohio has shown that it "established a substantial likelihood of success" on its claims the provision in question, in the American Rescue Plan Act

, may violate the U.S. Constitution's spending clause. The court noted, however, that the likelihood is "by no means a certainty."

"The conceded ambiguity in the tax mandate, as written, establishes that Ohio has a substantial likelihood of showing that the ARPA violates the spending clause," the court found.

The judge said Ohio has shown it's currently suffering irreparable harm, but the relief the state is seeking wouldn't prevent Ohio from suffering that harm. Therefore, while denying Ohio's request for a preliminary injunction, the court nevertheless said it will allow Ohio to raise the issue later "should efforts at recoupment under the tax mandate become a meaningful possibility."

The decision, issued out of the Southern District of Ohio's Western Division court, came one day after a federal court in Missouri tossed a similar challenge by Missouri's attorney general.

The so-called tax mandate provision in question, passed as part of the ARPA, bars states, territories and localities that accept the roughly $350 billion pot of cash from "directly or indirectly" using the coronavirus aid to offset a reduction in net revenue. Otherwise, they risk having to return the amount that is used to offset a tax cut.

Ohio Republican Attorney General Dave Yost contends the tax mandate violates the spending clause of the Constitution by being coercive and ambiguous. The provision also violates states' rights under the 10th Amendment by commandeering state taxing authority, Yost has argued.

Under the American Rescue Plan Act, states have been able to apply for funds since the law's effective date of March 11, the court said, and therefore Ohio has been suffering harm since by "being forced to ponder whether to accept an unconstitutionally ambiguous deal."

"Forcing Ohio to determine how to respond to the offer of funding under the cloud of an ambiguous term acts as the injury in fact," the court said.

The court said it understood the state's injury claims could be characterized as intangible or abstract rather than concrete but said it "ultimately disagrees with that view." If the provision violates the spending clause, "Congress has fallen short in delivering the constitutionally required clarity," the court said.

The court also acknowledged that Treasury released an interim final rule Monday meant in part to give guidance on the tax mandate provision. But the court said that even if the guidance clears up ambiguity, it doesn't fix potential constitutional violations at the time Ohio filed the suit.

The court noted the Treasury guidance is an interim final rule subject to revision and it's not clear if it could provide the needed spending clause clarity the same way a final regulation could. The court questioned whether final regulations could ever cure the ambiguity issues, because such a clarification may have to come from Congress and not the executive branch.

"The court finds that the (likely) unconstitutional ambiguity in the statute's language, with its resulting impact on Ohio's exercise of its sovereign powers, constitutes not only an injury in fact, but also irreparable harm," the court said.

Looking at the tax mandate provision in question, the court said it "cannot fathom" what it means to indirectly offset a reduction in the net tax revenue, noting the indirect offset language for net tax revenue is "hopelessly muddled."

"The court honestly has no idea what an 'indirect offset' to net tax revenues may be," the court said. "It became clear at oral argument that the federal government was largely unwilling to hazard a guess as to what it meant, either."

But in denying Ohio's preliminary injunction motion, the court said it's unlikely the state would accept the funds and then have them later clawed back during the course of the litigation, though it added if that was likely, it might reconsider.

Soon after the order was issued Wednesday, Yost's office filed an emergency motion to expedite the proceedings on its requests for a permanent injunction against the provision and asked for a declaratory judgment by June 4.

Yost, in a release, said his office looked forward to a final judgment in the case.

"The trial court here agreed with our core argument: The federal government does not have the right to tell the states what to do with its tax policy," Yost said. "Imagine if a conservative federal government required states to reduce taxes as a condition for receiving emergency funding."

Update: This story has been updated with comment from Yost.