Ohio pressed on Wednesday with its challenge to a federal law prohibiting states from using coronavirus aid to offset tax cuts, saying that a recent proposed rule from the U.S. Department of the Treasury didn't render the law constitutional. 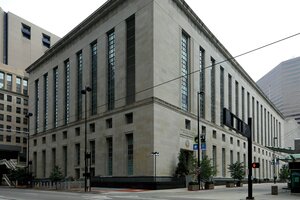 's provision that bars states from using federal aid to offset net revenue reductions, or risk having to return the funds, remains unconstitutionally ambiguous and coercive despite Treasury's May 10 interim final rule on the provision, Ohio argued in a brief filed in federal court. Ohio asked the court to issue a permanent injunction against that provision and to declare it unconstitutional.

U.S. District Judge Douglas R. Cole denied Ohio's bid for a preliminary injunction on May 12, but said the state "established a substantial likelihood of success" on the merits because it is suffering irreparable harm. Ohio suggested this meant that a permanent injunction would provide more adequate relief.

, which allows Congress to attach certain conditions for use of federal funds, for being unclear and coercive. In its Wednesday motion, Ohio took aim at Treasury's rule, saying its attempts to eliminate the alleged ambiguity of the clawback provision fell flat.

Treasury's rule said if net tax revenue hasn't been cut, states fall under a safe harbor rule and the clawback provision doesn't apply. The rule also set up a de minimis standard when the total value of revenue reductions by a government is below 1% of the reporting year's baseline. If below that amount, the clawback would not be triggered, according to the rule.

Additionally, the rule sets the baseline to measure reductions in net tax revenue to 2019 fiscal year tax revenue, indexed for inflation in each year of the covered period. It also outlines how states should track and report their tax changes to Treasury through 2024, when funds must be spent.

But Ohio claimed the clawback provision remains in violation of the spending clause because U.S. Supreme Court precedent has held that only Congress, rather than agencies, can clarify ambiguities relating to spending clause legislation.

Further, Ohio said the rule also fails to define certain key terms and concepts, such as what it means if a state "indirectly offsets" a reduction of net revenue with federal aid, and what specifically would be considered spending cuts.

Buckeye State lawmakers are crafting a budget with a mix of tax cuts and expanded deductions. Considering that the rule won't be finalized before the state's June 30 budget deadline, Ohio argued that the interim regulation doesn't offer the state a clear picture of how it can set its own tax policy without triggering a clawback.

"It borders on absurd to suggest that states can obtain the statutory clarity to which they are entitled through an agency-issued rule that the federal government itself does not deem final," Ohio said.

Ohio's case is one of several that attorneys general from around the country have filed against the clawback provision. Most of the challenges have been lodged by Republicans, although Iowa's Democratic Attorney General Tom Miller signed onto a lawsuit with 12 other states at the behest of Republican Gov. Kim Reynolds.

The litigation is at various stages. A federal judge dismissed a complaint from Missouri, although the state appealed that ruling on Monday, and district court rulings in the other cases are pending.

Treasury has argued that states generally lack standing to bring the challenges because the harm they allege has been speculative and Congress was acting within its authority to block states from using federal aid to pay for tax cuts. Although a court agreed with Treasury that Missouri lacks standing, Judge Cole rejected that argument and ruled that Ohio established standing to bring its claims.

Treasury has also said the law isn't coercive because states can decline the federal funds if they wish to cut taxes that would trigger the clawback. But Ohio claimed that was a disingenuous argument because it's on tap to receive $5.5 billion in federal aid — more than 7% of its 2020 budget. Declining the aid when it's trying to recover from the pandemic would have Ohio's economy lag behind those of other states that would benefit from the federal funds, Ohio said.

"Especially given the economic climate — which, as the interim rule recognizes, finds the states and their citizens in dire circumstances … it ignores reality to say that Ohio could simply reject the act's offer of funding," Ohio said.

Representatives of Yost's office and Treasury did not immediately respond to requests for comment on Wednesday.

Treasury is represented by Brian David Netter, Stephen Ehrlich and Charles E.T. Roberts of the U.S. Department of Justice.