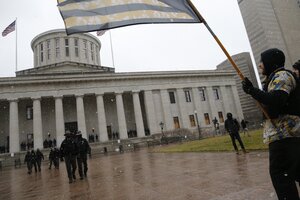 The Republican-led committee passed H.B. 110, the budget bill for fiscal years 2022 and 2023, along a party-line vote, sending the measure forward to the full Senate. The bill would phase in 5% across-the-board income tax cuts by 2022 and reverse a 2020 law

that temporarily allows cities to tax employees working in other municipalities.

Currently, Ohio deems remote work performed during the pandemic to occur at an employee's principal place of work, but the budget would state that provision was meant to offer withholding relief and not affect a determination of where an employee is liable for municipal income taxes.

Before passing the bill, the panel adopted an amendment seeking to expand several tax incentive programs, including doubling the amount of Ohio opportunity zone tax credits an individual can receive in a biennium from $1 million to $2 million. That program offers $50 million in total credits over a biennium to investors in economically distressed areas designated in federal law, stemming from a capital gains tax break in the federal Tax Cuts and Jobs Act

The amendment also proposes to revoke the eligibility of production contractors, or entities other than a production company involved in making a motion picture, from receiving film or theater tax credits.

"We believe this is a strong budget that provides $875 million in income tax relief as Ohioans head back to work in the post-pandemic economy," John Fortney, a spokesman for the Ohio Senate majority caucus told Law360 after the committee passed the bill. Fortney said the Senate will take up the budget Wednesday.

The Senate plan is a significant deviation from the budget the Republican-controlled House of Representatives passed in April. That proposal would reduce all nonbusiness income tax rates by 2% and establish income tax deductions for gains on investments in Ohio-based venture capital firms and on venture capital firm investments in state businesses. The House bill also didn't address the local tax provision on remote workers.

Zach Schiller, a research director at Policy Matter Ohio, a progressive research group, objected to the bill's expansion of several tax credit programs, noting that the measure would also eliminate the state's Tax Expenditure Review Committee. That committee was created under a 2016 law

Without the committee's oversight of the programs, Schiller told Law360 that the public won't know if the incentives "benefit Ohioans in a way that they should."

"To me, it's the height of irresponsibility to do that," he said.

When asked about the committee's proposed elimination, Fortney said that evaluating tax expenditures is already part of the General Assembly's job during the budget process.

The bill also represents lawmakers' latest attempts to reverse the temporary local income tax change that was enacted through H.B. 197 last year and will be in effect until 30 days after Ohio lifts its pandemic-related state of emergency. That law has been at the center of a series of legal challenges from telecommuters who claim cities are unconstitutionally taxing them.

In May, the state House of Representatives passed a bill, H.B. 157, that would stop cities from taxing remote workers in 2021 but wouldn't allow refunds for 2020, after local government representatives cautioned that allowing retroactive refunds for a closed tax year could cripple municipal budgets.

The Senate Finance Committee tabled a number of amendments from Democrats during Tuesday's meeting, including one that sought to bar remote workers from seeking refunds for tax year 2020.

"There are a number of issues in these amendments that are … probably worthy of future dialogue," Committee Chairman Matt Dolan, R-Chagrin Falls, said. "But as of today, we just couldn't get there."

Sen. Vernon Sykes, D-Akron, the committee's ranking member, added that the municipal income tax provision was one element that he believes needs more attention. His office had no immediate comment after the vote.

Kent Scarrett, executive director of the Ohio Municipal League, a trade group for local governments in the Buckeye State, said the budget bill indicates that lawmakers have "buyer's remorse" because it seeks to undo the law they passed last year to minimize the pandemic's damage to city coffers.

"This changes the rules on what was passed by the General Assembly and what cities have been operating under," Scarrett told Law360. "We're very concerned about the revenue impacts."

Although the bill's exact fiscal impact on local governments is unclear, House lawmakers said while debating H.B. 157 that Ohio's six largest cities could lose a combined $306 million if most employees don't return to the office and continue to work remotely after the pandemic.

If the budget passes the Senate as expected, it will likely be ticketed for a conference committee, where representatives from each legislative chamber will negotiate the bill's final language before sending it to Republican Gov. Mike DeWine. Ohio's new fiscal year begins July 1.