Hospitality Tax Aid Could Take Back Seat On Capitol Hill

A bipartisan push to provide pandemic-related tax incentives to the tourism and hospitality industries faces hurdles on Capitol Hill as lawmakers focus on trying to advance incentives for infrastructure and for working families proposed in President Joe Biden's recovery plan. 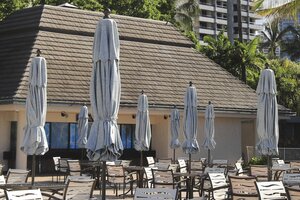 The proposed Hospitality and Commerce Job Recovery Act would provide a 50% credit for qualified travel expenses capped at $1,500 per household and phased out at higher income levels. (AP Photo/Marco Garcia)

Several senior lawmakers in both parties said a drive for new incentives to help the tourism and hospitality industries recover from setbacks sustained during the coronavirus pandemic will face obstacles as lawmakers prepare to advance parts of Biden's infrastructure plan in a regular-order five-year highway bill or in a filibuster-proof reconciliation bill. They said the fate of such business incentives could be a barometer for whether there is a base of support for another round of pandemic relief measures to follow up on items passed by Congress in March in the American Rescue Plan Act.

Proponents argued that the incentives are needed to help restaurants, hotels and other businesses in the tourism and hospitality industries recover from the pandemic. And they are making the case the incentives should be a priority along with other items such as a green energy tax package and incentives in Biden's American Families Plan. But some Republicans have questioned whether specific business sectors should get a batch of pandemic-related incentives in light of recent job gains and a strong 6.4% gross domestic product growth rate in the first quarter.

Rep. Steven Horsford, D-Nev., a member of the House Ways and Means Committee, said he planned to work with allies in both parties to incorporate his bipartisan Hospitality and Commerce Job Recovery Act proposal, H.R. 1346, into an infrastructure plan or other legislation. The measure would provide a 50% credit for qualified travel expenses capped at $1,500 per household with a framework for phasing out the incentive at higher income levels. It also would provide a credit for qualified unmerchantable food and beverage inventory and a credit to cover qualified restaurant restart costs after pandemic-related closures.

"This is about using our federal tax code to get major sectors of our economy that were disproportionately affected back on track," Horsford told Law360.

The Horsford bill has 86 co-sponsors including six Democrats and four Republicans on the Ways and Means Committee. Besides the Horsford bill, other ideas on the table include various payroll tax credits for business operators and a potential extension of the allowance contained in the Consolidated Appropriations Act

Ways and Means Committee Chairman Richard Neal, D-Mass., said decisions on new incentives for the hospitality and tourism industries would be made based on an analysis of the pandemic's effects on businesses and of economic data.

"I am open to some more assistance. I am open to fact-based assessments of need," Neal told Law360.

But Rep. Don Beyer, D-Va., a member of the Ways and Means Committee, said Democrats faced tough choices in developing a tax package for an infrastructure bill as business advocates seek help for different sectors of the economy.

"You have to look at it industry by industry, sector by sector, to see where the help is most needed. On the other hand, we have to balance that against industries that are not getting tax credits," Beyer told Law360. He serves as chairman of the congressional Joint Economic Committee.

In the Senate, Finance Committee Chairman Ron Wyden, D-Ore., has said he also remains open to additional incentives for the hospitality and tourism industries. He said he was closely following implementation of the Restaurant Revitalization Fund overseen by the Small Business Administration that was enacted under the pandemic rescue law, and he believed there may be a need for additional incentives to help some businesses recover from pandemic-related losses.

"I want to look at the numbers. But I'm just telling you that they are really hurting," Wyden told Law360, referring to the restaurant industry.

Sen. Catherine Cortez Masto, D-Nev., has been pushing for a bipartisan plan, S. 477, that has incentives similar to those in the Horsford bill and has attracted support from two GOP allies: Sens. Kevin Cramer, R-N.D., and Shelley Moore Capito, R-W.Va. Her proposal has received backing from several trade groups including the National Restaurant Association, American Gaming Association and U.S. Travel Association, which represents transportation, lodging, retail and entertainment businesses.

Cortez Masto said several types of incentives were needed to ensure a strong rebound by businesses in the hospitality and tourism sectors of the economy.

Sen. Brian Schatz, D-Hawaii, has pushed for a Save Hotel Jobs Act, S. 1519, that would deliver a payroll tax credit to cover 50% of the cost of personal protective gear and technology, enhanced cleaning protocols and increased testing. The proposal also would provide grants to hotel owners to encourage rehiring of laid-off workers. He said incentives were needed to help the tourism and hospitality industries recover from a decline in business during the pandemic and fluctuations in the value of the dollar.

"Jobs are not coming back fast enough," Schatz told Law360.

Schatz's bill has been backed by the American Hotel and Lodging Association, a trade group, and UNITE HERE, a union for workers in hotels, transportation and textile manufacturing.

Some senior Republicans have taken a cooler stance toward new incentives aimed at providing pandemic relief to the hospitality and tourism industries.

Rep. Kevin Brady, R-Texas, ranking member on Ways and Means, said he was undecided about whether he would support several bipartisan proposals for pandemic-related business incentives. Sen. Mike Crapo, R-Idaho, ranking member on the Finance Committee, has said he was not backing proposals for new incentives, for now, and was continuing to evaluate the pandemic's effects on farmers and different types of businesses.

But Sen. James Lankford, R-Okla., a member of the Finance Committee, said he and other conservatives were skeptical of the need to build on past legislation, which provided pandemic-related incentives to businesses and funding to state and local government.

"I'm not sure who's left that isn't swimming in money at this point," Lankford said.

In order to address such concerns, Rep. Tom Suozzi, D-N.Y., a member of the Ways and Means Committee and a supporter of the Horsford bill, said he and other lawmakers would work with business advocates to put a spotlight on deep financial losses and continuing needs of restaurants, hotels and other businesses. In addition to targeted aid for the tourism and hospitality industries, lawmakers are weighing a potential extension of an upgrade in the employee retention tax credit covering 70% of qualified wages capped at $10,000 per employee per quarter — for a maximum credit of $7,000 in each of the first two quarters of 2021 — expiring at the end of June.

"The hospitality and tourism industries are examples of industries that were wiped out. So, we've got to do everything we can do to try and help them," Suozzi told Law360.

Rep. Tom Rice, R-S.C., another supporter of the Horsford bill and a member of the Ways and Means Committee, said he was hoping there was still an opening for a quick deal on incentives backed by lawmakers in both parties to help the hospitality and tourism industries.

"I do think they could use another shot in the arm. But the longer we wait, the less likely it will occur," Rice told Law360.