The capital gains tax hike proposed by President Joe Biden could shrink in the Senate as Democratic Party leaders lay the groundwork to move a reconciliation bill framed by a fiscal 2022 budget resolution through the evenly divided chamber. 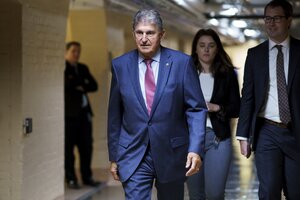 Democrats are split over Biden's plan to tax capital gains at 39.6% — up from 20% — for those earning more than $1 million, or $500,000 for married people filing separately. Several senior Democrats said that rate may need to come down as they seek a deal on the capital gains tax hike and other items in Biden's American Families Plan, including extensions of three temporarily expanded family incentives.

. Intraparty disputes over the rate likely will come to a head as Democrats try to move the budget resolution through the Senate this month and prepare for a September showdown on the reconciliation bill.

Currently, a top capital gains rate of 20% applies to those earning more than $441,450 for individuals and $496,000 for married couples, and a 15% rate applies for those with incomes below those thresholds but above $80,000. Another 3.5% levy is applied to net investment income, including capital gains, for those earning more than $125,000 for individuals or $250,000 for married couples.

Manchin has also pushed to set the corporate tax rate at no higher than 25%, rather than Biden's goal of 28%, and has argued for a reconciliation bill with a price tag of no more than $2 trillion.

Other Democrats have raised questions about Biden's proposal to tax unrealized capital gains at death for those earning more than $1 million, with a likely exemption for some family-owned farms and small businesses. And some Democrats have expressed doubts about Biden's plan to end an allowance for general partners to pay a 20% rate on their shares of profits, or carried interests, in their investment funds.

Sen. Robert Menendez, D-N.J., a senior member of the Finance Committee, voiced concerns about the broad scope of the proposed changes in such capital gains levies combined with a higher corporate rate and an increase in the top individual rate to 39.6% from 37%.

"What's the actual effect of the whole thing? At the end of the day, if we were to do everything that is listed in the proposal, I think it would have a very strong consequence on the capital gains structure," Menendez told Law360.

Finance Chairman Ron Wyden, D-Ore., said last week he expected to sift through tax hikes proposed by the administration and lawmakers as he helps to develop a plan to cover the reconciliation bill's cost. He said Democrats were "going to go after carried interest" and made clear he was looking to resolve differences in his party over capital gains and other tax-related issues.

"We're going to pay for this bill. Period. I'm telling you now there are a variety of ways to do that," Wyden told reporters.

Wyden has continued to explore his own long-standing draft plan to impose an annual tax on some unrealized gains in stocks and other tradable assets. The levies would be targeted at investors with at least $10 million in assets over three years and $1 million in earnings, and would be based on so-called mark-to-market valuations.

Potential tweaks to shrink the scope of Biden's proposed capital gains tax hike could force Democrats to find other ways to raise revenue. The Tax Foundation, a conservative think tank, has estimated that Biden's proposals to raise capital gains levies for the wealthy by raising the effective rate, taxing capital gains at death and ending the carried interest tax break would raise more than $220 billion over 10 years.

Despite opposition from moderates, Sens. Elizabeth Warren, D-Mass., a Finance Committee member, and Chris Van Hollen, D-Md., former chairman of the Democratic Senatorial Campaign Committee, said they believed Biden's call to equalize levies on capital gains and wages would continue to resonate with many lawmakers and voters.

"I think people will agree that it's unfair to tax wage income at much higher rates than unearned income," Van Hollen told Law360.

Warren told Law360, "This is about who bears the burden of paying the cost of running our country. Right now, the tax breaks go to people who are wealthy, who have built up capital investments, not to people who are working for wages."

While Democrats try to cut a deal on taxation of investment profits to help pay for Biden's recovery plan, Republicans have defended the capital gains tax framework established by the 2013 fiscal cliff deal

and left in place by the 2017 tax overhaul

"When you tax something, you get less of it. You will reduce the investment capital," Crapo told Law360.

During the 2020 campaign, President Donald Trump vowed to cut the top capital gains rate to 15%, matching a temporary benchmark created by the 2003 Jobs and Growth Tax Relief Reconciliation Act

With Biden in the White House, Sen. John Cornyn, R-Texas, a member of the Finance Committee and former GOP whip, said Republicans would try to defend the status quo rather than cut capital gains taxes.

Sen. Rick Scott, R-Fla., chairman of the National Republican Senatorial Committee, said GOP lawmakers would make the case to voters ahead of the 2022 midterm elections that a big capital gains tax increase would undercut an economic rebound from the coronavirus pandemic.

As Republicans continue to mount attacks on capital gains tax hikes, Sen. Ben Cardin, D-Md., a senior member of the Finance Committee, said several of Biden's proposals could lose traction because of their complexity. Those include plans for taxing unrealized capital gains at death and treating investment fund partners' income from carried interests the same as wages.

But he said party leaders would have plenty of leeway on where to set the top capital gains rate.

"That could be calibrated. It's not necessarily what I support or would like to see happen," Cardin said. "But it would be a little easier than dealing with the question of what is a capital gain."