The 15% global corporate minimum tax will only apply to multinationals that hit the threshold of €750 million ($845 million) in gross revenue in two of four successive financial years, according to a draft of rules obtained Wednesday by Law360. 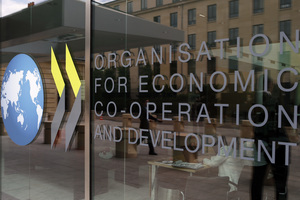 The OECD's model rules for implementing the corporate minimum tax into domestic law are expected to be released formally this month. (AP Photo/Francois Mori)

The draft model rules by the Organization for Economic Cooperation and Development, dated Nov. 20, are expected to be completed and released formally later this month — around the same time the European Union publishes its legislation transposing the minimum tax into its law. The document obtained by Law360 is the OECD's blueprint for how to implement the minimum tax into domestic law.

The rules apply to members of multinational groups that report €750 million or more in the consolidated financial statements of the ultimate parent entity in two out of four years immediately prior to a tested fiscal year, the document said.

A senior Nigerian official involved in drafting the document confirmed to Law360 the Nov. 20 version is the OECD's final draft. A Dec. 2 copy in circulation changed no additional policy but simply represents the clean copy for use by national governments.

Industry groups, businesses and civil society organizations have complained about being sidelined during the process of developing technical rules on the tax overhaul. One member of the business advisory group to the OECD, known as BIAC, told Law360 that criticism applies to the European Commission as well as the OECD.

"It's not just the OECD, it's the OECD and the EU" who need to listen to stakeholders, according to the BIAC member, who asked not to be named due to the sensitive nature of the topic. The breakdown in relations prompted the advisory body to send a letter laying out its grievances in November.

"The real danger is that because we've got to this point, in terms of detailed technical rules, without a lot of consultation on what those rules actually mean … they're not at a place where they are actually workable," the BIAC member said. "We've had a small amount of businesspeople being asked a very small amount of questions, and that frankly has been the extent of the consultation."

Similar grumbling has been heard in Brussels, where the commission has been secretive about the form its internal minimum tax legislation is taking. The commission declined to perform impact assessments and didn't formally open the process to stakeholder input as it normally does for new legislation.

The BIAC member blamed the lack of consultation with business on "this urgency for there to be as short a gap as possible between the political agreement and getting these rules actually legislated and into force."

The political agreement is "already very strong," according to the business advisory group member. "The irony is that we won't meet the political objectives with the technical rules as they currently stand."

The political agreement involves a comprehensive rewrite of international corporate tax rules, which nearly 140 jurisdictions agreed to in October following years of negotiations led by the OECD. The minimum tax falls under the second "pillar" of the overhaul, while the first pillar reallocates a portion of large multinationals' profits to market jurisdictions where businesses have customers but not a physical presence.

The draft model rules flesh out several aspects of the Pillar Two agreement, including a substance-based carveout, which excludes any income that is 5% of the carrying value of tangible assets and payroll. According to the model rules, tangible assets include property, equipment and natural resources located in the jurisdiction, as well as a lease on rights to use tangible assets.

The carveout doesn't apply to property that is held for sale, lease or investments, nor tangible assets that are used to generate a company's international shipping income — such as ships and other maritime equipment, according to the draft rules.

Representatives for the OECD and the commission did not immediately respond to requests for comment.

Correction: An earlier version of this story contained a mischaracterization of BIAC's role. The error has been corrected.

Update: This story has been updated with details about the OECD's final draft.