Certain internet activities would not qualify for federal protections that insulate businesses from tax on net income when soliciting tangible personal property orders is their only connection to a state under guidance proposed by New York on Friday.

The guidance on the federal protections afforded by the Interstate Income Act of 1959, commonly known as P.L. 86-272

, generally follow an updated statement from the Multistate Tax Commission on how states could apply the law in the internet age. New York is the second state, after California, to issue guidance indicating that it intends to conform to the MTC statement. 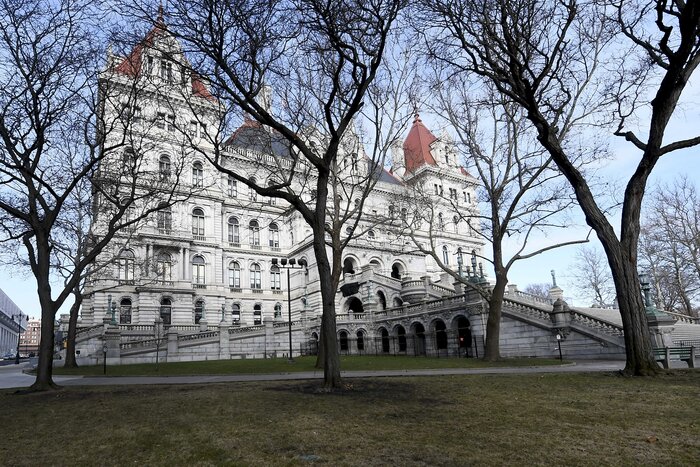 New York's Department of Taxation and Finance issued guidance on Friday that would conform with that of the Multistate Tax Commission on the federal protections afforded by the Interstate Income Act of 1959. (AP Photo/Hans Pennink)

As New York issued the guidance Friday, it called for public comment to be turned in by June 30. The guidance on P.L. 86-272 for the internet era is part of hundreds of pages the New York Department of Taxation and Finance proposed on nexus and the taxation of partnerships.

New York's proposed rules follow a Feb. 14 memorandum from California on P.L. 86-272 for internet commerce. California's guidance came about six months after the MTC's August vote to update its statement on how states should now respond to P.L. 86-272.

Echoing language from P.L. 86-272, the MTC's updated guidance said soliciting orders for tangible personal property is the same whether it is done over the internet or by another method. In addition, a business can "present static text or photos on its website," without that counting as business activity, and thus subject to taxation, in states where customers are located, the MTC said.

Under the nexus section of its new guidance, New York says that "new provisions, largely modeled after the MTC model statute, are added to address P.L. 86-272 and activities conducted via the internet."

Like the MTC and California, New York proposes that any activities, including those conducted over the internet would escape the P.L. 86-272 shield unless they consist only of solicitation of orders for tangible personal property, or are de minimis. An example that would not fall into either category, and thus would not be shielded by P.L. 86-272, would be "interacting with customers or potential customers through the corporation's website or computer application." But in conformity with the MTC and California, New York proposes that just placing static text or images on a website does not trigger taxation.

New York would also be in conformity with the MTC and California on the treatment of internet "cookies," or identifying pieces of data that a business may place on computers or other electronic devices of its customers. The cookies generally gather information that the business will use in ways that are not entirely ancillary to solicitation or orders for tangible personal property, New York said. Thus, the corporation is not shielded from taxation when placing cookies.

Jeff Reed, tax partner at Kilpatrick Townsend & Stockton LLP told Law360 on Friday that the additions to New York's draft regulation concerning internet activities go too far. He said that under several of the examples, a corporation doing nothing in the state loses P.L. 86-272 protection. Such a result is inconsistent with the aim of P.L. 86-272, Reed said, adding that it was intended to provide a specified level of in-state activity that corporations could perform without becoming subject to income tax. It was understood that out-of-state activities could not cause a corporation to become taxable in the state, Reed said. Under the draft regulations, the distinction between out-of-state and in-state activities is collapsed, he said.

Mitchell Newmark, tax partner at Blank Rome LLP, said he had not yet read the New York proposals but is versed in the language of the MTC updated statement. He said he finds it to be an overreach. He said Congress should authorize another "Willis Commission," referring to the Special Subcommittee on the Taxation of Interstate Commerce that operated in the mid-1960s.

"I am disappointed in the MTC and the MTC model," Newmark said.

Reed agreed with Newmark on the need for congressional intervention.

"If the MTC and the states would like a 'modernized' version of P.L. 86-272 enshrined in federal law, they should lobby Congress to change the statute," Reed said. "But it is not sensible to interpret P.L. 86-272 as currently written as somehow providing support for taxing a corporation with no in-state activity merely because residents are engaging with the corporation's website."

Representatives for the MTC and the New York Department of Taxation and Finance did not immediately respond to requests for comment.