Former Trump campaign chairman Paul Manafort was released from prison Wednesday to serve the remainder of his sentence in home confinement amid concerns about the spread of the novel coronavirus in the federal correctional system. 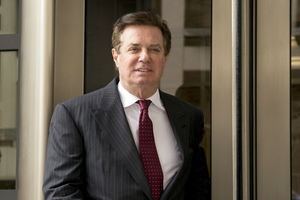 Paul Manafort, shown here in April 2018, was released from prison Wednesday amid concerns over the novel coronavirus. (AP Photo/Andrew Harnik)

Cadwalader Wickersham & Taft LLP partner Todd Blanche, one of Manafort's lawyers, confirmed to Law360 that his client was transported to his home in northern Virginia early Wednesday.

The move comes a month after Manafort's counsel asked the director of the Federal Bureau of Prisons to allow the 71-year-old to complete all or part of his remaining sentence in home confinement. In an April 13 letter seen by Law360, the lawyers said Manafort's age and preexisting health conditions put him at a "high risk" of contracting COVID-19 at the Federal Correctional Institution, Loretto, a low-security facility in Pennsylvania.

Manafort is one of six Trump associates to be convicted on charges brought by former special counsel Robert Mueller's wide-ranging probe into Russian interference in the 2016 U.S. presidential election.

His 7½-year sentence resulted from two separate convictions — in Washington, D.C., for obstruction and unsanctioned lobbying work, and in Virginia for bank and tax fraud. He had been slated to be released from federal prison in November 2024.

As COVID-19 cases continue to grow nationwide, federal courts and correctional facilities have been under mounting pressure to release vulnerable inmates.

U.S. Attorney General William Barr, who oversees the Bureau of Prisons, urged federal prosecutors in a memo last month to take the pandemic into consideration when deciding whether to seek pretrial detention for criminal defendants.

Judge Jackson noted that Gates' wife is continuing cancer treatment and said his travel in and out of jail in the middle of a pandemic would be a threat to her health. Gates' attorney, Thomas C. Green of Sidley Austin LLP, with the backing of federal prosecutors, had asked the judge to allow his client to serve the remainder of his sentence at home.

Gates, 48, was sentenced in December to three years' probation after serving as a star witness in Mueller's investigation after pleading guilty to a variety of charges including money laundering, tax evasion and efforts to avoid reporting "foreign agent" status to the U.S. government for lobbying work performed on behalf of pro-Russia politicians in Ukraine.

In response to the news Wednesday about Manafort's transfer to home confinement, Lanny Davis of Davis Goldberg & Galper PLLC, a spokesperson and lawyer for former Trump lawyer and self-described "fixer" Michael Cohen, tweeted that he hopes his client will get the same treatment.

Cohen, 53, also faced charges stemming from the Mueller probe and was sentenced in 2018 to three years in prison in upstate New York. Cohen was led to believe he would be transferred to home confinement on May 1, but the release has been delayed without explanation, Davis said in the tweet.

"Why not now? #freeMichael," Davis added.

The former staunch Trump ally was sentenced in 2018 for a series of crimes, including paying off two women who said they had affairs with the president, lying to Congress about Russia and dodging taxes on $4.1 million of income.

Counsel information for the government could not immediately be determined.

Manafort is represented by Todd Blanche of Cadwalader Wickersham & Taft LLP and Kevin Downing of the Law Offices of Kevin Downing.

Update: This story has been updated with additional context and information.