A push by Democrats to provide payments to tax-paying undocumented workers with individual taxpayer identification numbers — and some U.S. citizens married to immigrants — has emerged as a potential sticking point in legislation to address the COVID-19 pandemic. 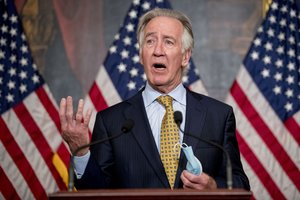 Democrats vow to advance a contentious provision in the House-passed $3 trillion Health and Economic Recovery Omnibus Emergency Solutions Act to broaden eligibility for a proposed second round of economic impact payments to include some undocumented workers, who file returns with ITINs. The Coronavirus Aid, Relief and Economic Stability Act

enacted in March left out all undocumented workers by requiring Social Security numbers to qualify for economic impact payments of $1,200 for adults under income caps and $500 for qualifying children.

A longstanding partisan clash over tax-related benefits for ITIN holders looms as a potential hurdle in talks aimed at developing a bipartisan package to replace expanded jobless aid set to expire July 31. And the dispute between Democrats seeking more benefits and Republicans backing restrictions likely will extend into the peak 2020 campaign season, as both parties roll out competing tax agendas.

On the other side, House Ways and Means Chairman Richard Neal, D-Mass., and other senior Democrats have argued that ITIN holders deserve the same coronavirus aid as other taxpayers. The Heroes Act would allow people with ITINs and Social Security numbers to receive new economic impact payments of $1,200 for an individual, $2,400 for a married couple and $1,200 apiece for up to three dependents, subject to earnings caps.

A study by the Institute on Taxation and Economic Policy, a progressive think tank, found new economic impact payments under the Heroes Act would cost $9.4 billion for 4.3 million ITIN holders and their 3.5 million children. The study also found they would receive about $7 billion under the bill's retroactive allowance for impact payments authorized by the CARES Act.

In the Senate, Grassley has been trying to develop a Senate GOP response to the Heroes Act focused on business tax incentives and limits on pandemic liability lawsuits, but he faces potential opposition from Democrats, who are insisting on aid for ITIN holders and other items such as broader incentives for families with children and low-income workers without children.

"We want to make sure it's in there," Sen. Catherine Cortez Masto, D-Nev., a member of the Finance Committee, told Law360, referring to relief payments for ITIN holders.

Proponents of expanding the impact payment eligibility point to key roles played by ITIN holders in the hospitality industry and in the arenas of home care and nursing homes, construction and agriculture.

Despite such arguments, Sen. John Cornyn, R-Texas, a senior member of the Finance Committee, predicted Republicans would be firm in insisting that economic impact payments should not be allowed for ITIN holders.

"Illegality should not be rewarded," he told Law360.

The IRS created ITINs in 1996 as a pathway for undocumented workers to pay taxes and as an alternative to restricted Social Security cards previously issued to certain noncitizens. The current fight over coronavirus relief represents the latest in a series of partisan skirmishes over the scope of taxpayer rights and benefits for ITIN holders and their children, mirroring other battles over a path to potential legal immigration status for undocumented workers.

Meg Wiehe, deputy director of ITEP, said a patchwork of tax laws and regulations have evolved for ITIN holders, who are not eligible for the earned income tax credit or Social Security benefits, unlike other taxpayers.

"People who pay income taxes and payroll taxes should receive all benefits delivered through the tax code," Wiehe told Law360.

But Alex Nowrasteh, director of immigration studies for the Cato Institute, a libertarian think tank, disagreed. He said the denial of economic impact payments was part of a justifiable push to curb the deficit by denying access to tax credits, welfare and other subsidies for all undocumented workers.

"A lot of undocumented workers have low incomes and high labor force participation rates, so if we increase welfare payments and tax credits for them, it will have two effects: It will decrease their net tax payments and increase the deficit," Nowrasteh told Law360.

With such concerns in mind, some Republicans have pushed to tighten restrictions on ITIN holders, including a requirement in the 2015 Protecting Americans from Tax Hikes Act

for revalidation of ITINs every five years and cancellation if not filed with tax returns for three straight years.

In light of deep partisan differences on tax issues involving undocumented workers, several lawmakers in both parties said a potential starting point for talks could be proposals aimed at addressing the denial of economic impact payments to some married taxpayers with Social Security numbers, whose spouses have ITINs.

Sen. Robert Menendez, D-N.J., a senior member of the Finance Committee, said a strong case could be made for any proposal to ensure that married U.S. citizens with Social Security numbers get economic impact payments, whether filing jointly or not, and prevent denial of such benefits "just because of who they love and who they are married to." While continuing to press for payments to all ITIN holders, he said he and other Democrats would be willing to discuss a tweak to the CARES Act to provide economic impact payments for certain married taxpayers with Social Security numbers, whose spouses have ITINs.

"It's not ideal, but at least it's something," Menendez told Law360.

The IRS had no comment in response to a question about the development of the agency's finding that economic impact payments are not allowed for joint-filing married couples, if one spouse has an ITIN.

U.S. Department of the Treasury officials were not available immediately to comment on the policy of denying economic impact payments for such joint filers.

"The payment is supposed to follow the Social Security number. It should. If it's not, we should find out why," said Thune, chairman of the Senate Finance Taxation and IRS Oversight Subcommittee.