Contractors hired by the Internal Revenue Service to assist in noncompliance investigations would be prohibited from questioning witnesses under oath or their counsel, the agency said in proposed regulations released Thursday. 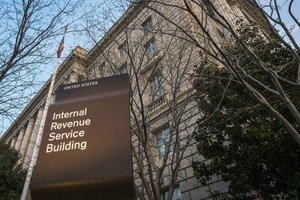 Some of the proposed regulations on Internal Revenue Service contractors are intended to carry out provisions of the 2019 Taxpayer First Act. (AP)

go one step further than the 2019 Taxpayer First Act

, by preventing contractors from questioning legal representatives about the assertion of privilege or objections, the agency said.

The U.S. Department of the Treasury and the IRS chose to forgo "any potential opportunity for an IRS contractor attending an IRS summons interview to ask the summoned person's representative to clarify an objection or assertion of a privilege," the proposed regulations said.

Lawyers from the U.S. Department of Justice's Tax Division may indeed question witnesses' legal representatives, according to the proposed regulations.

The Taxpayer First Act made a host of administrative changes to the IRS, which included barring contractors whom the IRS hires for their subject matter expertise, per Internal Revenue Code Section 6103

, from questioning witnesses under oath.

The TFA "bars persons other than officers or employees of the Internal Revenue Service or the Office of Chief Counsel from substantively questioning summoned persons who are providing testimony to the IRS under oath, effective as of July 1, 2019," the agency said in the proposed rules.

Likewise, contractors are limited in their right to receive from the IRS individuals' tax-related books or records, per IRC Section 7602, the agency said in the proposed rules.

The House Ways and Means Committee and the Joint Committee on Taxation attempted to clarify that the IRS, per Section 7602, would be unable to furnish contractors with the books or records of taxpayers unless "such person requires such information for the sole purpose of providing expert evaluation and assistance to the IRS," the agency said.

Whistleblowers, experts possessing specialized knowledge in certain subject matters, and personnel providing ancillary support services to the IRS may, in certain circumstances, be granted access to books and records related to Section 7602-oriented examinations, the agency said in its proposed rules.

The proposed rules would not prevent some contractors, like court reporters, from asking the type of "housekeeping questions which are an essential part of their jobs," the proposed rules said.

Update: This article has been updated to provide more details from the proposed rules.