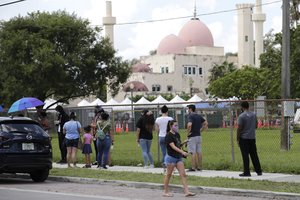 People waited in line at a COVID-19 testing site near the Moorish-style City Hall in Opa-Locka, Florida, in July. Early that month, a Florida state court upheld a nonprofit corporation's right of first refusal to purchase Aswan Village, an affordable housing project in the city. (AP)

The court decision is the latest in an ongoing battle to maintain the nation's stock of affordable housing properties as some housing tax credit investors — eyeing increased property equity since the Great Recession — have begun challenging nonprofits' right to control properties in court. Some investors have met with success, forcing owners into monetary settlements.

Ellen Lurie Hoffman, federal policy director for the National Housing Trust, a Washington, D.C.-based nonprofit group focused on preserving affordable housing, called the Florida case "critically important" because the court affirmed that the nonprofit general partner should maintain the long-term affordability of housing tax credit properties for low-income communities in accordance with the aims of the LIHTC program laid out in Internal Revenue Code Section 42

"We've been really concerned about the trend of litigation that we've seen," Hoffman told Law360. "We hope the decision stands. It sends a clear message across the country that this is how the program was designed."

In the Aswan Village case, HK Aswan LLC, a Boston-based investor and an affiliate of HallKeen Management, had taken over a Bank of America housing fund's interest in Aswan Village in 2014, which was around the 11th year of the 15-year tax credit compliance period, according to Judge Thomas' opinion. Under the tax credit program rules, owners of an affordable housing project are required to comply with rent affordability restrictions during the compliance period.

Then in 2018, near the close of the 15-year compliance period when OLCDC's right of first refusal could take effect, HallKeen began to solicit offers for Aswan Village, according to the opinion. HallKeen went so far as to sign a letter of intent to sell the property in 2019 to Lincoln Avenue Capital, the opinion said.

OLCDC then tried to exercise its right to first refusal and purchase the property itself, saying the right to do so had been triggered by the letter of intent.  HallKeen refused, saying no sale had occurred and therefore the right was not triggered, according to the opinion. OLCDC brought its complaint in a Florida state court to resolve the dispute.

Willie Logan, CEO and president of OLCDC, told Law360 that the partnership agreements signed with HK Aswan, as well as the low-income housing tax credit rules under Section 42, supported his right to refuse the sale and keep the property affordable.

"As bad as Miami needs affordable housing, to me it was just fundamentally and morally wrong" to sell the property to investors with no interest in property management who were only looking for a return on investment, Logan said.

The court sided with OLCDC, rejecting arguments by HallKeen that the receipt of an actual third-party offer to purchase the development was necessary to trigger an enforceable right of first refusal.

The court ruled that the letter of intent sent to OLCDC manifested HallKeen's willingness to sell the housing tax credit development, thereby giving nonprofit developer OLCDC the right to purchase it at a below-market price as stipulated under Section 42.

The property had a market value of roughly $21 million, but existing mortgage loans dropped the amount of equity available from the sale to about $12 million, according to Logan.

"They look for opportunities around the country to buy out the person who originally invested and built the property, in order to wait to the end of the tax credit expiration period, so that they can take the equity out and resell to somebody else for 15 years," Logan said.

Andrew P. Burnes, HallKeen's president and CEO, disputed that claim, arguing it was always clear in discussions with OLCDC that Aswan Village would not become market-rate apartments.

"There was never a single instance when anyone proposed taking this property out of the affordable housing umbrella," Burnes said in a statement.

If the current court ruling stands, it will inject massive uncertainty into negotiations in housing tax credit deals "by setting a new legal precedent" that would override contract language negotiated by two informed parties, Burnes said.

Mark Solov, an attorney with Stearns Weaver Miller Weissler Alhadeff & Sitterson PA who represented HallKeen, filed a motion in the Miami-Dade County circuit court on July 30 asking the court to set aside its order.

Solov said OLCDC sought to avoid paying HK Aswan for the fair market value of its 51% ownership interest in the property.

Instead, OLCDC sought to "manufacture a circumstance by which it could claim its right of first refusal was triggered, thereby avoiding payment to HK Aswan and achieving a windfall," he said in a statement.

"The documents on which this arrangement is organized are similar to forms used throughout the affordable housing market," Burnes said. "If this order stands, it will have profound and adverse consequences for the affordable housing industry, introducing a level of uncertainty that will make it more difficult to engage in recapitalization for aging or distressed properties."

David Davenport, an attorney with Winthrop & Weinstine, which represents OLCDC, said the corporation feels very confident that the court came to the right conclusion. He plans to file a response to HallKeen's motion to reconsider the judgment, which will likely lead to another hearing, he said.

Logan said the case sets a precedent that might keep other nonprofit developers from being cheated out of millions of dollars in equity that can be used to rebuild properties and provide services to low-income residents.

In 2020 alone, more than 15,000 units of affordable housing built 30 years ago through the housing tax credit program are in danger of losing the income and affordability protections that favor low-income tenants, according to a recent study by the National Low Income Housing Coalition.

in a state court that was transferred to federal court at the request of the tax credit investor. In transferring the case, the district court said the not-for-profit's claims raised a disputed federal issue, based on the application of the right of first refusal found in Section 42.

The court recognized the disparate treatment of cases heard by the Massachusetts Supreme Judicial Court, and a federal court in Washington state. The case is still pending.

Hoffman of the National Housing Trust said some tax credit investors seem to have developed a kind of business model in litigating these types of cases that are jeopardizing affordable housing developments.

"And for sure, they have deeper pockets than the nonprofits that are generally pitted against them," she said.