With the COVID-19 crisis hardening preexisting divisions in the bloc, the European Union's failure to make headway on tax harmonization risks unraveling its internal market and at worst causing its collapse, veteran tax observers warn. 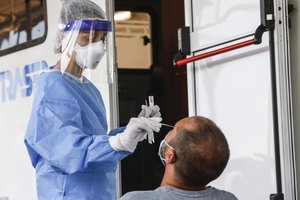 A medical worker collects a swab from a person in a COVID-19 test in Rome on Monday. Anger about the perceived lack of European solidarity in the face of the pandemic has exacerbated anti-European feelings in Italy, according to a recent article by a scholar. (AP)

Along with worsening divisions in the EU, the global pandemic has forced countries to do what previously had been unthinkable: resurrecting borders that had been open for decades. If countries continue to be suspicious of each other and, in some cases, accuse other states of hoarding tax revenue, then the next step could be the breakup of the euro currency.

"If there isn't a bold move on the tax front, we may end up with a scenario where the EU is undermined significantly," said Gianmarco Monsellato, an EU tax policy leader with Deloitte in Paris. "If we let tax competition continue, a country like Italy will be saying, 'We're always losing at tax competition and the only way to compensate for it is to regain currency sovereignty, and leave the euro.'"

Anger about the perceived lack of European solidarity in the face of COVID-19, which hit Italy before the rest of the continent, has exacerbated anti-European feelings in that country, and the worsening of Italian attitudes toward Europe is likely to persist, according to a recent article by Erik Jones, a scholar on Italy at Johns Hopkins University in Bologna.

Recent surveys have shown that around half of Italians would support leaving the EU. Moreover, an Italian senator recently started a political party with the aim to take Italy out of the EU.

"Corporate taxation has become a divisive topic, where Southern European countries are putting blame on the Netherlands in particular," said Niclas Frederic Poitiers, a research fellow for the Bruegel think tank.

The Dutch government recently has been attempting to change the reputation of the country as a place that facilitates tax avoidance.

One major obstacle to tax harmonization is the requirement for unanimity voting.

EU law requires unanimous agreement among member states to change tax laws — something critics say has allowed a small group of countries to block needed measures, such as the EU's digital services tax in early 2019.

"That is a vital matter," former Dutch finance minister Onno Ruding told Law360. "Insofar as matters of taxation do have a heavy impact on the internal market, one must give up the requirement of unanimity and move to qualified majority voting since the internal market is of paramount importance."

After serving as Dutch finance minister in the 1980s, Ruding led a committee that studied whether differences in tax systems within the EU created distortions in the continent's single market. In its report, issued in 1992, the committee called on the EU to set up a minimum corporate tax of 30% as well as a maximum rate of 40%. The report also recommended moving toward a harmonized tax base.

To this day, the EU has neither a minimum nor a maximum corporate tax, and, despite long-standing efforts by the European Commission, there is no consolidated tax base.

"Like many others, I have become somewhat frustrated by the lack of progress on the harmonization of corporate tax," Ruding said.

His committee believed that the EU's internal market, in which goods, services and individuals are supposed to move freely, wouldn't work without a fair amount of harmonization in areas such as value-added tax, corporate income tax and income tax, the former Dutch minister said. The committee wanted to move corporate tax more to a system along the lines of VAT, where rules exist on minimum rates.

"You can argue about how low or high that tax should be, but I still think that we should adopt that minimum tax — and not for purely political reasons, but for the single market, to avoid a race to the bottom," he said.

A minimum tax is part of the Organization for Economic Cooperation and Development's two-pillar approach to changing international corporate tax. The other part is the more controversial reallocation of taxing rights that would allow countries in which companies earn digital revenue, but lack a taxable physical presence, to claim some tax revenue.

The EU has said that it will pursue both pillars on its own if there is no international agreement by the end of the year.

If countries fail to make progress on harmonizing tax policies, then they have no right to be upset about tax avoidance, Ruding said. As he saw it, the root cause of tax avoidance is simply governments creating their own laws without coordinating with other countries. This allows taxpayers to "sail between the two cliffs quite legally," he said.

"If you are not willing to address the root cause by harmonizing or reducing differences between national tax regimes, then you get what you expect," he said. "Look in the mirror, look at yourself and make the changes."