U.S. Postmaster General Louis DeJoy's postal efficiency upgrades, combined with the backlog of unopened IRS mail during the novel coronavirus pandemic, has prompted some tax professionals to look for new ways to help their small-business clients file their returns. 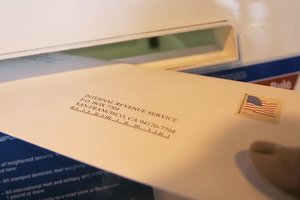 With the IRS acknowledging a backlog of unopened mail, and with a political battle underway over postal delays, tax professionals are recommending electronic payment of taxes and even delaying critical filings until 2021. (AP)

Congressional hearings scheduled for Friday in the Senate and Monday in the House will focus on whether DeJoy's actions will delay mail-in voting during the November elections. However, some accountants and lawmakers see a wider threat from his actions that could undermine the ability of taxpayers to conduct routine business with the Internal Revenue Service.

Concern over postal delays grew this week as DeJoy promised on Tuesday to stop pursuing cost-cutting efforts that slowed postal deliveries, but then told House Speaker Nancy Pelosi, D-Calif., that he wouldn't replace high-speed mail sorting machines and postal boxes that have already been removed from service.

Multiple states have filed federal lawsuits against the U.S. Postal Service to stop DeJoy from eliminating staff overtime and outgoing mail processing at state distribution centers. While the battle continues over mail delays, tax professionals have adopted a variety of tactics to serve their clients, including encouraging electronic payment of taxes, where possible, and even delaying some critical business filings until 2021.

President Donald Trump is trying "to disrupt the post office because he doesn't want to do mail-in balloting, but the problem is, the IRS still relies on a lot of U.S postal correspondence," said Eric Pierre of Pierre Accounting, a full-service certified public accounting firm in Austin, Texas.

"Normally, we would suggest cutting a check to the IRS when you pay your taxes because then you can send it by certified mail and get a deposit record" that can be used if you must go into U.S. Tax Court, Pierre told Law360.

"IRS offices were closed for three months during the pandemic, so we've had to tell people to electronically pay their tax bill," Pierre said.

Mail got piled up from IRS office closures in the wake of the pandemic, affecting about 12.3 million pieces of correspondence, the IRS said in June.

Nayo Carter-Gray, an accountant and enrolled agent who operates 1st Step Accounting LLC in Towson, Maryland, said one of her bookkeeping clients would be a prime candidate for S corporation status to save on self-employment taxes, but that election will have to wait while the post office mail delay continues.

"So instead of filing Form 2553 via mail, I'm going to electronically file the form with the 2020 tax return next year, asking for a late election," Carter-Gray told Law360. "But in 2020 we will start operating the business as if we have already been approved for S corporation status. For example, we will put the owner on payroll instead of allowing him to take owners' draws."

"We also work with some Australian individuals who have a tax year that ends on June 30 because that's what they do in Australia," he told Law360. "Even though a normal Form 1040-NR is eligible to be filed electronically, the fiscal year individual returns must be filed on paper."

While mail service is delayed, taxpayers can use FedEx or UPS, but that could be problematic as well as more expensive than postal mail, Streig said. Even before the IRS shutdown for COVID-19, the respiratory illness caused by the coronavirus, the agency didn't always have someone available to receive and sign for packages, he said. Right now, receiving IRS invoices and submitting payments to the agency is taking longer, he added.

The impact of the postal slowdown hasn't escaped the notice of some House and Senate tax writers.

"No one is immune from the service disruptions caused by President Trump's handpicked postmaster general. The House will take an important step this weekend in stopping these attacks on the U.S. Postal Service," said Rep. Gerald Connolly, D-Va., who chairs a House Oversight and Government Reform subcommittee that oversees the Postal Service.

The House plans to vote Saturday on a bill that would prohibit the U.S. Postal Service from making any changes to the operations or level of service it had in place on Jan. 1, 2020, and would provide $25 billion in funding for the mailing agency. The legislation, called the Delivering for America Act, was introduced by Oversight Committee Chairwoman Carolyn Maloney, D-N.Y.

When asked about the House funding proposal, White House press secretary Kayleigh McEnany told reporters that the Postal Service has enough funding to last through 2021, including $10 billion from the Coronavirus Aid, Relief and Economic Security Act

. She declined to address calls for DeJoy to roll back the operational changes that have already taken place.

Sen. Ron Wyden of Oregon, the top Democrat on the Senate Finance Committee, which oversees the IRS, said that what he characterized as Trump's effort to destroy mail service and sabotage the November election is already causing significant collateral damage.

House Ways and Means Committee member John Larson, D-Conn., noted that nearly 250 million returns and forms are processed each year by the IRS, with 70 million of these mailed to the IRS, including tens of millions coming from business filers.

While the IRS is still working through its large backlog of mail from the COVID-19 pandemic, the agency should stop sending out incorrect tax delinquency notices to taxpayers who have already paid, Ways and Means Chairman Richard Neal, D-Mass., told IRS Commissioner Chuck Rettig in a letter Wednesday.

Neal wants the IRS to establish an online portal for taxpayers to notify the agency that they have mailed payments since the beginning of March, Neal said. Many taxpayers mailed in their payments months ago, and it's the agency's duty to make sure they don't get charged penalties or interest for delays that aren't their fault, he said.

Former IRS Commissioner John Koskinen said undermining the U.S. Postal Service's mission would affect the 15 million tax returns that are filed on paper and usually sent through the post office. Some of those returns are being filed right now to meet an Oct. 15 extension deadline, he said.

Moreover, the IRS communicates by mail with taxpayers who have questions about their returns, and the required response times will be affected by the mail slowdown, he told Law360.

"While you can file or respond to the IRS by FedEx or UPS, that's an added burden and expense for taxpayers, which, for some, will discourage compliance," Koskinen said. "But the majority of taxpayers will continue to use the mail, and the question of the timeliness of the communication will be a headache for the IRS, since who knows when letters will be postmarked or delivered?"