President Donald Trump's vision for tax cuts — including a payroll tax cut and new business incentives to counter the novel coronavirus pandemic — has begun resonating with Republican lawmakers as he prepares to accept his party's nomination for re-election Thursday. 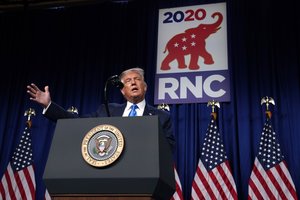 Amid a stalemate in pandemic response negotiations on Capitol Hill, several congressional Republicans are voicing strong support for Trump's emerging campaign tax plan. The plan's potential payroll tax cut would replace the president's unilateral four-month deferral of payroll taxes, even though a similar proposal initially had little support in Congress. In his bid to promote his plan, Trump has emphasized benefits for the middle class, investors and manufacturers willing to move certain operations from China to the U.S.

The Trump campaign issued an agenda outline on Sunday that included "tax cuts to boost take-home pay and keep jobs in America." It listed an expansion of opportunity zones, "made in America" tax credits for certain domestic manufacturers and full expensing deductions for companies in essential industries such as life sciences and robotics that "bring back their manufacturing to the United States."

"I've turned to where I'm supportive," Estes told Law360, referring to a payroll tax cut combined with an expected transfer, or backfill, of other revenue to the Social Security trust fund.

Rep. Jodey Arrington, R-Texas, another Ways and Means member, said he was confident that in addition to tax cuts, Trump's agenda would entail extensions of temporary items in the 2017 tax law.

"His absolute top priority is going to be to make the individual tax breaks permanent, which is also the small-business tax breaks," Arrington told Law360.

In recent weeks, Trump has stressed his desire to cut taxes on middle-income families and on investors with capital gains. That emphasis resembles the strategy for his last campaign, when he unveiled a tax plan in the summer of 2016 that was projected by the Tax Foundation, a conservative-thinking research group, to cost at least $4.4 trillion over 10 years, and then led a GOP electoral sweep.

Mark Meadows, Trump's chief of staff, said the president's focus on tax cuts would provide a "great issue and contrast" in his race against Biden.

"I don't know that that's going to be the central theme of his message. But any time that Joe Biden's willing to increase taxes and President Trump is willing to decrease them is a good day," Meadows told Law360.

Stephen Moore, an outside adviser to the president, predicted Trump would refrain from releasing a detailed tax blueprint as he did in 2016 and for now stick to a rough menu of new tax cuts favoring ideas that can "get the economy going in the next six months."

"This is an emergency. So you've got more interest in short-term aid for the economy rather than things that have a medium- or long-term effect on the economy," Moore told Law360.

Trump offered a preview of his second-term tax plan with his Aug. 8 memorandum calling for a temporary payroll tax deferral for workers earning less than $104,000. More than 30 business groups including the U.S. Chamber of Commerce criticized Trump's payroll tax deferral order in an Aug. 18 letter to Treasury Secretary Steven Mnuchin and congressional leaders, citing concerns about its effect on 2021 tax liabilities. The coalition urged Trump and Congress to eliminate the taxes altogether to avoid uncertainty.

In response to business advocates' concerns about his executive action, Moore said Trump probably would push for legislation in the next Congress to forgive the deferred payroll levies and seek a similar payroll tax cut for an additional six to 12 months.

In addition to tax cuts for middle-income workers, Moore said Trump would look to promote an allowance for a downward adjustment of capital gains taxes to reflect inflation. He said Trump could also look at a reduction in the current 20% rate — plus the 3.8% net investment income tax — on capital gains for individuals earning more than $434,550 and married couples earning more than $488,850.

Some senior Republicans including Rep. Kevin Brady, R-Texas, the ranking member on the Ways and Means Committee, have said they remain open to a payroll tax cut, a new 15% individual rate and a capital gains tax cut.

Brady said he believed Trump's focus on tax incentives for families and investors would resonate with voters.

"Their big worry is whether we can get back to work. And when we work, will we have enough money?" Brady told Law360.

On the other side, Democrats have warned that a payroll tax cut would siphon resources from Social Security, and they contend that a new 15% individual rate and a capital gains tax cut would give disproportionate benefits to wealthy families. They have applauded Biden's call for higher levies aimed at corporations and taxpayers making more than $400,000.

While Trump has portrayed the campaign as a referendum of sorts on GOP tax cuts and Democratic tax hikes, he has stopped short of offering detailed proposals. Thus he leaves himself lots of room to reshape plans and woo some GOP deficit hawks, who have expressed concern about the cost of fiscal priorities and their impact on the national debt.

For now, the Trump tax plan remains a work in progress and has not been scored by economic analysts for its impact on federal revenues, unlike Biden's blueprint, which the Tax Foundation projected to raise $3.8 trillion over 10 years.

While Republicans say they are confident Trump will attract votes by promising tax cuts in lieu of Biden's overall tax hikes, Sen. Tim Kaine, D-Va., the 2016 Democratic nominee for vice president, predicted that voters in 2020 would focus more on the two candidates' overall strategies for dealing with the pandemic, and less on a side-by-side comparison of specific tax proposals.

"My thought is it will be a smaller issue," Kaine told Law360, referring to the clash of rival tax agendas. "It's just because I think the magnitude of the health crisis and the economic devastation is so significant."

As the pandemic continues to evolve, some lawmakers in both parties say Trump and Biden may be pressed to explain how their tax proposals would help families, businesses and the overall economy recover from big setbacks

Sen. James Lankford, R-Okla., a Finance Committee member, said that whoever wins the presidential election, Republicans probably would need to work out differences among themselves on fiscal goals and tax priorities.

"Coming out of COVID-19, we're going to try to figure out exactly what can be done and what should be done," Lankford said.

In the event Trump wins and the GOP does not win control of both chambers of Congress, Moore said, Trump will need to find ways to advance his tax priorities either with bipartisan deals such as the Coronavirus Aid, Relief and Economic Security Act

enacted in March or with executive orders.

But if the GOP pulls off a replay of its across-the-board 2016 triumph, Moore predicted, Trump will press for a budget reconciliation bill to cut payroll and capital gains taxes and extend a number of temporary provisions in the tax overhaul.