A recent draft proposal from the Organization for Economic Cooperation and Development outlines some of the difficulties in using financial statements for taxes, including accounting for stock-based compensation, penalties and even bribes. 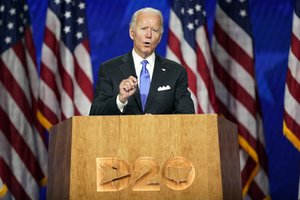 Joe Biden, the Democratic nominee for president, has proposed a 15% minimum tax on corporate income — one of many new policies that mix principles of financial accounting and the tax code. (AP)

The document could be a road map of the political land mines that Democratic presidential nominee Joe Biden faces if he wins in November and pursues one of his key proposals — a 15% minimum tax on corporate income, based on accounting books.

Biden's proposal, similar to one offered by Sen. Elizabeth Warren, D-Mass., is one of many new policies that mix financial accounting and the tax code. While the idea is intuitively simple and politically powerful, many experts in both fields warn against losing sight of the different goals of both systems. The OECD report highlights many of the adjustments that would need to be made to reconcile the two.

"The simple version of taxing book income is supposed to simply take this value and tax it," said Jeff Hoopes, a professor of accounting at the University of North Carolina. "Looking at this 252-page document suggests that what started as allegedly simple will never survive and stay true to the simple proposal."

Financial accounting standards — used for stock filings and other reports to inform investors about a companies' earnings — can be an enticing tool for corporate income tax critics who contend companies use too many tricks to artificially lower their taxable income.

Corporate tax planners would be much less eager to depress earnings statements, in theory, and thus a book income minimum tax could be a powerful backstop to the traditional income tax system.

But tax and accounting experts warn that the two systems pursue goals that are fundamentally different, even if they share elements. Both aim to measure a company's profitability, but for different purposes. Congress will often tilt the tax code in certain directions to achieve policy goals — for instance, by allowing companies to deduct expenses immediately or in an accelerated schedule, to encourage investment. Accounting standards, on the other hand, are often set by independent boards with the sole mandate to define and measure all potential earnings and liabilities, however long the time frame.

The recent OECD technical draft considers several of these divergences, including temporary differences — when the timing is different but the ultimate amount of income is unchanged  — as well as permanent differences.

The document pertains to the Global Anti-Base Erosion proposal, referred to as GloBE or the so-called Pillar Two of a two-part project that began in 2017 to address tax issues in the digital economy. Taking inspiration from the tax on global intangible low-taxed income established by the 2017 U.S. Tax Cuts and Jobs Act

, the plan aims to squelch profit-shifting to low-tax jurisdictions by ensuring that all companies pay a minimum amount of tax, regardless of where they do business.

The policy would be carried out by countries, which could enact Pillar Two through legislation and apply it to their own companies. If those companies had income in a different jurisdiction that was taxed below a certain level, the minimum tax would kick in.

But because it would be an international system, OECD delegates and officials are looking for a single standard to measure a company's income and define its tax base. After considering several options, the OECD settled on the use of financial accounting, including through globally recognized principles such as International Financial Reporting Standards.

A technical working draft obtained by Law360 lays out several considerations involved in syncing the financial accounting data to consider potential conflicts with national tax codes. These include reconciliation of book and tax differences on items such as income gains from stock sales, stock-based compensation to employees, payments of fines and penalties, and consideration of illegal bribes. In most cases, financial accounting principles require that all these expenses or types of earnings be included so that investors can obtain the clearest picture of a company. But for various policy reasons, tax codes often require that they be disregarded.

In the case of bribes, for instance, the OECD noted that "bribery hinders competition, distorts trade and harms consumers and taxpayers," and can "undermine public support for government."

"Denying a tax deduction serves as a strong symbol of a common international commitment to combat bribery," the draft stated.

In the case of legal penalties, most tax codes disallow the expense as a deduction "to limit the economic cost to only the person that committed the act, which would be diluted if the taxpayer were allowed to share the burden of the penalty with all taxpayers."

In keeping with the ultimate goal of Pillar Two to find an international standard that best approximates national tax codes, the OECD draft recommends that the proposal's tax base, while mostly defined through financial accounting, include disallowances for bribes and penalties above a minimum threshold of €50,000 ($59,500).

For other policies that incorporate financial accounting, the questions may be different.

Biden has proposed an additional tax on financial corporate earnings, applying to companies that have reduced their income through deductions or other methods.

"There's going to be a 15% minimum corporate tax," Biden said on MSNBC last year. "After all of the deductions you can take, you can never get yourself down below having to pay 15%."

Since the beginning of his campaign, Biden has criticized the tax practices of large U.S. tech companies such as Amazon.com Inc., contending they use loopholes and income-shifting to pay no taxes while reporting high profits.

The campaign has released no further public details about the minimum tax proposal, but other news reports the campaign has promoted said it would be based on book income.

Warren proposed a similar tax, which would have applied to a larger number of taxpayers, although at a lower rate of 7%.

For this idea, the absence of congressional tinkering has been one of its main selling points.

"To raise the revenue we need —  and ensure every corporation pays their fair share —  we need a new kind of tax that big companies can't get around," Warren, then a candidate for the Democratic presidential nomination, wrote in a Medium post in 2019.

But a truly undistorted financial reporting standard would include expenses for illegal bribes, penalties, executive compensation and several other items that could prove problematic from a policy and political perspective. Companies swept into the 15% minimum tax, if they couldn't avoid it entirely, could lower their applicable income and tax liability through any of these items, all of them currently nondeductible under the corporate tax code.

Congress could reverse this policy, but could it then resist making other tweaks to the system for other policy goals, such as encouraging investment in the U.S. or for green technologies? The alternative minimum tax could end up as a separate tax code with the same loopholes and deductions that Biden and Warren said it was meant to sidestep.

"Presumably, given the reasoning why he wants to do it, there wouldn't be that many adjustments," said Michelle Hanlon, a professor of accounting at the Massachusetts Institute of Technology.

Other potential issues include stock-based compensation, which Amazon.com has said is a primary reason it has claimed large deductions for the past few years.

Under the tax code, companies can deduct the full value of stock options, measured at the value of the stock at the time an employee exercises the options. For financial accounting, companies must record the cost of an option when it is first granted to the employee — earlier in time, but often based on a smaller estimate than what the employee ultimately claims.

The difference has proved beneficial to companies like Amazon.com, which rewards many employees through stock and has seen share prices rise and rise in recent years. But for companies whose stock falls, the effect could be the reverse.

"I think the tax rules are working pretty well; I think they're measuring and timing income correctly," said Steve Rosenthal, a senior fellow at the Urban-Brookings Tax Policy Center and a former legislative counsel for the Joint Committee on Taxation. "The book approach might result in more income in a rising stock market, but if the stock market should fall, that could be a big revenue loser."

The OECD report stated that the proposal will conform compensation of stock-based compensation to the rules of the local tax jurisdiction.

The OECD has said it will unveil a final version of its technical draft in October, although many of the larger political questions — such as the ultimate minimum tax rate — are not expected to be resolved until after then.

Biden's campaign did not respond to requests for comment.