Congressional Democrats aim to respond to President Donald Trump's attacks on tax hikes proposed by Democratic presidential nominee Joe Biden by pushing for tax incentives for working families similar to those those now stalled in pandemic response talks in Washington. 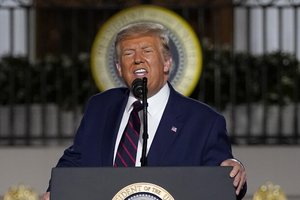 In his White House speech accepting the Republican presidential nomination Thursday, President Donald Trump said, "I will not raise taxes; I will cut them, and very substantially." (AP)

. For his part, Trump vowed not to increase taxes should he be reelected.

"On the other hand, just as I did in my first term, I will cut taxes even further for hardworking moms and dads. I will not raise taxes; I will cut them, and very substantially," Trump said.

Key Democrats said they would counter GOP efforts to cast the race as a contest between Trump tax cuts and Biden tax hikes by emphasizing that any Democratic tax increases would hit corporations and wealthy families, not taxpayers earning less than $400,000. The Tax Foundation, a conservative research group, has estimated Biden's overall plan would raise $3.8 trillion over 10 years, mainly by reversing parts of the 2017 Tax Cuts and Jobs Act.

Rep. Lisa Blunt Rochester, D-Del., a Biden campaign adviser, said Democrats would also compete with Trump's promised tax cuts by pointing to items passed by the House in May in the $3 trillion Health and Economic Recovery Omnibus Emergency Solutions Act, or Heroes Act. Among those are refundable tax credits for families with children and workers without children.

She made clear that such proposals likely would be part of her party's campaign agenda, even though they are separate from Biden's tax plan, which was designed to finance new initiatives on health care, education, child care and climate change.

"Everything is on the table for us. But the real focus is working families, and people paying their fair share. That's the goal," Blunt Rochester told Law360, referring to likely efforts to combine House Democrats' tax priorities with Biden's tax plan.

With an eye on a possible electoral sweep that would give Democrats control of the House and Senate, she and other congressional Democrats have begun discussing how Biden's tax plan might be blended with stalled House Democratic tax priorities, particularly if no agreement is reached on another pandemic response package.

Rep. Ben Ray Luján, D-N.M., a former chairman of the Democratic Congressional Campaign Committee, said Democrats also planned to continue criticizing the GOP's 2017 tax law as a giveaway to wealthy families. In addition, he said, Democrats will raise questions about whether Trump could deliver on a promised payroll tax cut and other items on his to-do list for middle-income workers.

"They never delivered for working families. The difference between Republicans and President Trump and Democrats and Vice President Biden is we will deliver tax cuts for hardworking middle-class families," Luján told Law360.

Luján said he and other Democratic lawmakers would argue their party has a broader tax agenda than Biden's original plan, including incentives for families that have been developed by House Ways and Means Chairman Richard Neal, D-Mass., as part of the Heroes Act.

Neal predicted voters would prefer his party's plan for reshaping the tax overhaul and delivering refundable tax credits over Trump's plan for leaving the 2017 law in place and adding new incentives for middle-income workers and reduced capital gains taxes.

"Our plan is a much more measured approach," Neal told Law360. "Their tax cuts went to people at the top. We're going to emphasize people that struggle every day."

Neal, the top Democratic tax writer, has said he plans to conduct his own review of the tax overhaul in 2021. While not embracing specific targets in Biden's agenda, such as a 28% corporate income tax rate and a top individual rate of 39.6%, Neal has made clear he will look for ways to advance his own long-standing proposals for tax incentives for working families similar to those in the Heroes Act.

While Neal and other Democrats look to work with Biden on their party's tax agenda, several GOP lawmakers said Trump's call for a payroll tax cut would serve as a linchpin of his emerging tax plan, which consists of proposals he has outlined in recent speeches.

For example, they predicted that Trump's vow to follow up on his unilateral four-month deferral of payroll levies for workers earning less than $104,000 by enacting a formal payroll tax cut in 2021 would be a centerpiece of his emerging second-term tax plan.

Mark Meadows, Trump's chief of staff, predicted that Trump's vision for a payroll tax cut would resonate with potential beneficiaries.

"For anybody that gets to take home more of their pay, that's a good day for them," Meadows told Law360.

An Aug. 23 agenda summary released by the Trump campaign did not mention specific tax incentives for families. However, it said Trump would push for an expansion of opportunity zones and incentives for certain domestic manufacturers, including those that move production in essential industries such as life sciences and robotics from China to the U.S.

While Trump and his allies have lambasted Biden's plan for the mountain of revenue it would raise for Democratic priorities, the president has opted not to offer a comprehensive plan of his own with detailed tax proposals that can be scored to assess its net cost, including any revenue-raising measures or spending cuts. For example, it remains unclear whether his plan would extend a number of temporary business incentives in the tax overhaul and whether it would pick up refundable business credits promoted by some GOP lawmakers.

Despite the absence of details in Trump's tax plan, Rep. Steve Stivers, R-Ohio, a former chairman of the National Republican Congressional Committee, predicted Trump's reduction of payroll levies would be viewed by voters as a "working-class tax cut" and was "one of many things, including law and order, that could get real traction." He said the Trump tax plan would serve as a key part of the GOP campaign agenda.

And whether voters favor a payroll tax cut or not, Stivers said he doubted many of them would support Democrats in the hope they will deliver tax incentives for working families.

"I don't think most people believe that. It's just not in the history," Stivers said.