The chairman of the House tax committee plans to continue efforts to advance a retirement savings tax package in his committee after lawmakers return to Washington in September, a plan that could eventually win over lawmakers from both parties. 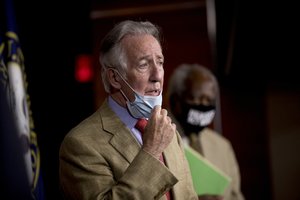 The chair of the House Ways and Means Committee, Rep. Richard Neal, and other key players in Congress say they are hopeful they can advance a follow-up to last year's SECURE Act. (AP Photo/Andrew Harnik)

Rep. Richard Neal, D-Mass., chairman of the House Ways and Means Committee, told Law360 that he was working with the panel's ranking member, Rep. Kevin Brady, R-Texas, to develop components of a retirement savings tax package and that "much of it is already done."

Both parties are looking to advance proposals aimed at spurring retirement savings and helping taxpayers make up for economic setbacks linked to the novel coronavirus, which causes the respiratory disease COVID-19.

Despite the current impasse in bicameral talks on pandemic response legislation, Neal and other key players in both chambers say they are hopeful they can advance a follow-up to a package of retirement savings incentives — the Setting Every Community Up for Retirement Enhancement Act, or SECURE Act. It was enacted last December in the fiscal 2020 omnibus spending law.

"I think you will see some sort of a retirement markup," Neal said.

Brady said he was also hopeful that he could reach agreement with Neal on another retirement savings package, which could move on its own or as part of other legislation either before the November election or in a post-election session.

"I'm optimistic about the bill itself because the provisions are not just bipartisan, they are smart, helpful approaches," Brady told Law360. "And their main goal is to help Americans who have the hardest time saving, those with low incomes and those who work for small businesses."

Facing GOP opposition to a proposal to require employers with more than 10 workers to offer automatic enrollment in a defined contribution plan, Neal said he was open to alternative approaches, such as employer tax incentives in lieu of a mandate.

In the 2019 law, lawmakers reached agreement on such an incentive for small employers with no more than 100 employees: a $500 credit annually for three years to cover the cost of offering new hires the option of automatic enrollment in a retirement plan.

Neal has been trying to develop proposals to help workers carry benefits from one job to another, similar to a provision in the SECURE Act that allows workers to move managed accounts and annuities to another employer's retirement plan or to an individual retirement account without penalty.

Lawmakers also are exploring language to expand on a provision in the 2019 law that raised by 18 months to age 72 the threshold for required minimum distributions from traditional IRAs.

signed by President Donald Trump in March included a suspension of required minimum IRA distributions for older Americans in 2020. House Democrats have supported a proposal to also suspend 2019 RMDs, which was passed by the House in the $3 trillion Health and Economic Recovery Omnibus Emergency Solutions Act, or Heroes Act.

In the Senate, Finance Committee Chairman Chuck Grassley, R-Iowa, said he was hopeful he could develop a bipartisan bill with the help of two panel members: Sens. Rob Portman, R-Ohio, and Ben Cardin, D-Md.

Portman's proposed S. 1431 could serve as a blueprint. The bill, which Cardin has co-sponsored, contains several measures aimed at increasing flexibility and encouraging more retirement savings, including increasing the age threshold to 75 for required minimum distributions from IRAs.

"I want to do one along the lines of the Portman-Cardin bill," Grassley told Law360.

She said lawmakers could cut a deal on a batch of retirement savings incentives if they resolved disputes on some pension-related issues.

"We could. It's needed," Stabenow said.

A key partisan dispute in these areas has been a conflict over Democratic efforts to advance a $48.5 billion plan to provide loans to troubled multiemployer pension funds, known as the Butch Lewis Act, which was passed by the House on its own and also was included in the Heroes Act.

As an alternative to the House plan, Grassley has argued for a framework he developed with Sen. Lamar Alexander, R-Tenn., with higher flat-rate premiums per plan participant to the Pension Benefit Guaranty Corp. and a retiree co-payment.

While both parties remain at odds over how to deal with the financial woes of certain multiemployer pension funds, Portman said he still believed there was interest on both sides in trying to move a retirement savings tax package on its own or as part of another bill such as an omnibus spending measure.

"I think there's an opportunity for us to come together across the aisle and across the Capitol. Much of what the Ways and Means Committee is doing is consistent with the Portman-Cardin bill," Portman told Law360.

Portman and Cardin said they believed their proposal for a refundable version of the saver's credit aimed at low-income taxpayers would have strong appeal, particularly for Democrats. Currently, the saver's credit can be claimed by individuals earning up to $32,500 for contributions to IRAs or retirement plans of up to $2,000, and by married couples earning up to $65,000 on similar contributions of up to $4,000.

Portman said he believed GOP lawmakers would be attracted to another provision in his bill, which would allow taxpayers when they reach age 60 to contribute up to $10,000 — up from the current $6,000 catch-up contribution cap — to certain retirement plans, including those organized under Internal Revenue Code Section 401(k).

He said the measure was viewed as a way to help baby boomers rapidly grow their retirement nest eggs.

Lawmakers also are looking for ways to provide more flexibility for withdrawing or borrowing cash from qualified retirement accounts. For example, they are exploring ways to build on a CARES Act provision allowing coronavirus-related distributions of up to $100,000 from an IRA or retirement plan in 2020 to be treated as loans, which can be repaid within three years and are not subject to the usual 10% penalty for early withdrawals by persons younger than age 59½.

Rep. Ron Estes, R-Kan., a Ways and Means Committee member, said he believed there was a strong desire among lawmakers in both parties to work out an agreement. As part of any deal, he said lawmakers would need to vet and build support for a menu of incentives to encourage small businesses and tax-exempt groups to offer more retirement savings options to employees.

"The things that we want to look at include how we make sure people save more for retirement and make it easier for them to go through that process," Estes told Law360.