Congressional Democrats are laying the groundwork for an ambitious stimulus measure that could move early next year in the event their party wins the White House and control of Congress as pandemic response talks remain stalled on Capitol Hill. 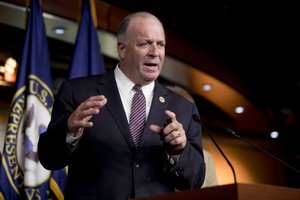 Rep. Dan Kildee, D-Mich., said Democrats likely would look to move a stimulus package like the 2009 American Recovery and Reinvestment Act, enacted during the Great Recession, if the party wins the White House and control of Congress. (AP Photo/Andrew Harnik)

With an eye on some polls showing a lead for Democratic presidential nominee Joe Biden, Democrats have signaled they may be willing to wait until after the elections to decide whether to cut a pandemic response deal in a post-election session. Or they could simply pivot to a big 2021 stimulus bill, potentially with a new president and Democratic majorities in both chambers.

Among the items that could move in a 2021 Democratic stimulus package are a refundable earned income tax credit for workers without children and incentives for child care, and items passed by the House in July in a five-year surface transportation bill, the Moving Forward Act, H.R. 2. That includes tax-exempt bond financing for infrastructure, a permanent extension of the new markets tax credit and green energy incentives.

"Senators will vote this week, and the American people will be watching," McConnell said.

Senate Minority Leader Chuck Schumer, D-N.Y., volleyed back that Democrats would oppose the package and keep pushing for a deal that "actually meets the urgent needs of the American people."

With or without a pandemic response accord this year, Ways and Means Chairman Richard Neal, D-Mass., said Democrats believed they would have an opening to move a package of incentives for working families, infrastructure and alternative energy early next year, if Biden wins and Democrats hold majorities in both chambers. He said such legislation could resemble the 2009 American Recovery and Reinvestment Act

, enacted during the 19-month Great Recession of 2007-2009, and could attract strong support among Democrats.

"There's a lot that you could do," Neal told Law360. "I've talked with the Biden people, and it's pretty clear that we're in the stage of relief and stability. To get to recovery, you're going to need some stimulus."

Rep. Dan Kildee, D-Mich., a Ways and Means member and chief deputy whip, agreed that Democrats likely would look to quickly move a stimulus package like the 2009 law — separate from the big surface transportation bill — with an ally in the White House and Democratic majorities in both chambers.

"It would be something like that. It would be an immediate response," Kildee told Law360.

House Budget Chairman John Yarmuth, D-Ky., said such action would hinge on the outcome both of pandemic response talks and the elections.

"If nothing gets done between now and the election, yeah, we could," Yarmuth told Law360.

On the campaign trail, both parties have offered divergent views on the state of the economy and competing plans for economic stimulus measures in response to the novel coronavirus pandemic. Republicans have voiced hope for a rapid V-shaped rebound, and argued for modest near-term incentives, such as President Donald Trump's payroll tax deferral for workers earning less than $104,000, to address the coronavirus, which causes a respiratory disease, COVID-19.

But Democrats have strongly opposed any deferral or reduction of payroll taxes, and made the case for a batch of ambitious incentives for workers and other priorities that could be enacted either this year or early in the next Congress as part of a plan to provide a longer range boost to the economy and avert what Biden last week called a potential "K-shaped recession."

In response to Biden's talk about economic woes, Trump told reporters Sept. 4 that Biden's blueprint for raising taxes on corporations and wealthy families was the "one thing that could stop the extraordinary economic comeback and wipe out the future of American workers." He pointed to the improved 8.4% unemployment rate for August as a harbinger of a fast recovery.

While Democrats ponder prospects for a 2021 stimulus bill under a potential Democratic president, Republicans said they remained focused on trying to cut a bipartisan deal on modest measures to follow up on items enacted last March in the Coronavirus Aid, Relief and Economic Security Act,

The GOP has called for a smaller response package, no larger than a $1 trillion Senate GOP blueprint. The new plan outlined Tuesday by McConnell included a shield through September 2024 to protect businesses, schools and hospitals against coronavirus-related liability lawsuits, additional Paycheck Protection Program loans for small businesses and an estimated $300 weekly upgrade in jobless aid through Dec. 27. The tax incentives in the package would include an increase in the CARES Act's $300 above-the-line deduction for charitable gifts in 2020 to $600 for individuals and $1,200 for married couples, and an allowance — long opposed by Democrats — for education savings plans organized under Section 529

to be used to cover certain expenses of parents that home-school their children for two years.

But House Speaker Nancy Pelosi, D-Calif., and other Democratic leaders have stood by demands for a package roughly twice as large, including broader incentives for families with children and other items in the $3 trillion Health and Economic Recovery Omnibus Emergency Solutions Act passed by the House in May.

Treasury Secretary Steven Mnuchin said on Fox News Sunday that "the president and I believe we should do more stimulus" in a modest pandemic response package, with an emphasis on near-term business incentives.

As Mnuchin prepares for a potential new round of talks with Democrats, many Republicans have rallied behind Trump's rough tax outline for the next Congress in the event he wins reelection and Republicans take control of both chambers of Congress.

For example, Rep. Kevin Brady, R-Texas, ranking member on Ways and Means, told reporters last week that House Republicans would continue to support efforts to cut a pandemic response deal and would offer their own tax agenda for the 2020 campaign aimed at "renewing our promise and opportunity as a country."

He said the House GOP tax agenda would be consistent with Trump's priorities, including efforts to expand a number of temporary business incentives in the 2017 Tax Cuts and Jobs Act

Some Republicans have argued over the years that the 2009 stimulus law was not effective, and have pointed to assessments that project delays prevented the measure's infrastructure funding from having an immediate impact. For example, a 2020 study by the Congressional Research Service found that only 9% of Transportation Department funding in the package was spent in the first six months of availability, compared to 44% of jobless aid included in the package.

For now, Republicans have not laid out the parameters or the timeline for their own stimulus measure that could be deployed in the next Congress should Trump win reelection with GOP majorities in both chambers.

Despite past critiques of the 2009 law, some Republicans remain undecided about whether they would be willing to support a similar stimulus package focused on working families, infrastructure and alternative energy if Democrats are in the driver's seat in the White House and in the House and Senate next year.

Sen. Deb Fischer, R-Neb., said she continued to have an interest in incentives for infrastructure investment, but could not say whether she would support a potential 2021 stimulus package focused in part on infrastructure-related priorities.

"We will have to see how everything works into a package. Obviously, I'm a big, big proponent of infrastructure, whether it's roads or broadband or ports. We have a lot we can invest in in the future, and I think it's important," Fischer told Law360.