Partisan disagreements over President Donald Trump's unilateral payroll tax deferral on incomes of less than $104,000 set the stage for broader clashes over proposals to reshape those levies to address economic fallout from the novel coronavirus pandemic. 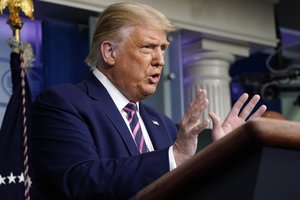 Democrats have signaled that they will uproot President Donald Trump's payroll tax deferral if their party wins control of the White House and as well as the House and Senate. (AP Photo/Alex Brandon)

For now, partisan proposals to kill or strengthen Trump's payroll tax deferral face certain roadblocks in a divided Congress. But both parties are making clear the fight will continue in a post-election session and in 2021, when they likely will be vying over a GOP push to turn the deferral into a tax cut and a Democratic drive to broaden payroll taxes and Social Security benefits.

Rep. John Larson, D-Conn., a senior tax writer and former Democratic Caucus chairman, said he expected Democrats would take a unified stand in a House floor vote this month on his Save Our Social Security proposal, H.R. 8171, to nullify Trump's memorandum deferring payroll taxes from Sept. 1 through the end of the year. Democrats also are preparing to try to advance a resolution to block implementation of Trump's tax deferral under the Congressional Review Act.

Larson and other key Democrats said a largely symbolic House vote to nullify Trump's action would not affect talk on legislation to follow up on the Coronavirus Aid, Response and Economic Security Act

, but may help to expedite intra-party efforts to settle on a strategy for raising payroll taxes and expanding Social Security benefits after the elections.

Democratic presidential nominee Joe Biden has proposed to apply payroll levies for the first time on the taxpayer earnings exceeding $400,000, which would raise $808 billion over 10 years, according to the Tax Foundation, a conservative think tank. And he has proposed to spend some of that money to expand Social Security benefits for low-income retirees.

But if Biden wins, Larson said, he and his allies would argue for a more ambitious Social Security 2100 Act proposal, H.R. 860, with 208 co-sponsors, to finance a gradual across-the-board increase in benefits by raising payroll taxes paid by workers and employers from 6.2% to 7.4% by 2043. Like the Biden plan, the bill would apply payroll taxes to income exceeding $400,000 and leave in place the $137,700 wage base cap for such levies.

"We believe in the bill. That's what we're going to ask for," said Larson, chairman of the Ways and Means Social Security Subcommittee.

Larson made clear he was not expecting, for now, a vote on his plan to tweak the Social Security formula, which currently relies on an economic snapshot — the national average wage index — taken two years before a beneficiary turns full retirement age 62, to head off a potential reduction in yearly benefits for people born in 1960.

Sen. Chris Coons, D-Del., an adviser to the Biden campaign, said Biden and Democratic lawmakers faced hard decisions down the road on how to apportion revenue from any payroll tax hike between expanding Social Security benefits and strengthening the program's trust fund.

"The debate is going to be vigorous. We are in such a hole right now in terms of revenues and our ability to meet the needs of the moment," Coons told Law360.

While Democrats try to develop a unified stance on their own plan to deal with payroll taxes and Social Security benefits, Republicans rallied behind a proposal by Rep. Kevin Brady, R-Texas, ranking member on the Ways and Means Committee, to forgive deferred taxes under Trump's executive order and transfer funds from the Treasury to hold harmless the Social Security trust fund.

Brady said by rejecting his Support for Workers, Families and Social Security Act bill, H.R. 8201, Democrats would leave taxpayers with the onus of remitting deferred payroll taxes between next Jan. 1 and April 30 as required by IRS Notice 2020-65

While Democrats and Republicans squabble over Trump's payroll tax deferral, they have made clear they will set aside, for now, efforts to tweak the Social Security formula — based on the nation's average wage index in the year when a future beneficiary reaches age 60 — to avert a pandemic-related "notch" problem: a potential $1,900 cut in yearly benefits for people born in 1960.

And both parties have looked for ways to score political points on the issue of payroll taxes and to lay groundwork for moving proposals to reshape payroll taxes in a post-election session and in the next Congress.

Sen. Chris Van Hollen, D-Md., a former chairman of the Democratic Senatorial Campaign Committee, said Democrats would make the case that a deferral — and potential reduction — of payroll levies was not a good strategy for spurring an economic recovery and could encourage similar GOP moves in 2021.

"I think it's going to hurt [Trump] overall if it looks like what it is, which is political gamesmanship," Van Hollen told Law360.

But Brady and other GOP lawmakers said they believed Trump's payroll tax deferral would resonate with workers as a way of boosting their 2020 income, at least temporarily. Brady said the GOP would point to the proposal as a way of providing support to workers in health care and other service jobs, who play a key role in fighting against the spread of novel coronavirus, which causes a respiratory disease, COVID-19.

"They want to hurt him rather than help essential workers," Brady told Law360.

"I am confident Republicans in the House and Senate, and the president will forgive those payroll taxes," Brady told Law360.

But Portman told Law360 the fate of any proposal for another payroll tax cut going forward would "depend on where we are in the economy."

In lieu of proposing any longer range changes in payroll taxes and Social Security, some GOP senators have backed a pandemic response plan that would create bicameral committees in 2021 to develop plans to deal with revenue shortfalls in trust funds for Social Security and other programs.

On the other side, Democrats have signaled they will uproot Trump's payroll tax deferral if their party wins control of the White House and the House and Senate. And Coons and Sen. Ben Cardin, D-Md., a senior member of the Finance Committee, said Democrats would need to come together rapidly on a strategy for advancing their party's own priorities on payroll taxes and Social Security.

Both Cardin and Coons predicted Biden, if elected, probably would point to the 1983 Social Security law

, which was enacted when he was a senator, as a model for strengthening the retirement program's trust fund, possibly in tandem with an expansion of certain benefits.

"Our first priority is to make sure that we protect the Social Security system as it exists today," Cardin told Law360.