Despite multiple departures by some countries' tax enforcement heads, a joint tax investigation project among the U.S. and four other nations has room to expand, Don Fort, the departing chief of the IRS' Criminal Investigation arm, told Law360. 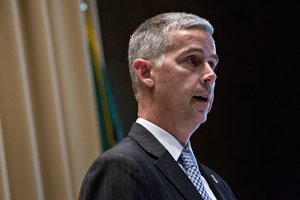 Don Fort, chief of the IRS Criminal Investigation Division, was one of five tax chiefs who formed the Joint Chiefs of Global Tax Enforcement, or J5. (Andrew Harrer/Bloomberg via Getty Images)

Fort will be the third participating tax enforcement chief in the Joint Chiefs of Global Tax Enforcement, or J5 initiative, to leave his job when he retires Sept. 30, following his counterparts from Canada and the Netherlands.

In a recent interview on his tenure as CI chief ahead of his departure, he called the J5 project one of his biggest accomplishments and said that while the program is "at a crossroads now," he's confident in its future.

For one thing, participating countries aren't just relying on their enforcement chiefs, Fort said. From a U.S. standpoint, James Lee, the current deputy chief of Criminal Investigation, who will replace Fort after his retirement, worked closely with him on the initiative and is fully invested in it, Fort said. The Criminal Investigation Division has also assigned more workers to the project, and Internal Revenue Service executives are fully behind it, Fort said.

"It's got to live beyond the original five chiefs," he said. "The level of sharing and collaboration and interaction between the five countries far exceeded my expectations."

The program, formed in July 2018, grew out of discussions at a 2017 Organization for Economic Cooperation and Development meeting, Fort said. The U.S., Canada, the U.K., the Netherlands and Australia are the five participating countries.

In July, Fort credited the group's cooperation for doubling swaps over the past two years of cross-border information on tax crimes involving the U.S.

Investigators in IRS Criminal Investigation also worked on a case under the J5's umbrella involving the BitClub Network, a scheme that sought investor funds in return for shares of purported cryptocurrency mining pools and rewarded investors for recruiting new investors, according to a July statement.

That month a Romanian man pled guilty to one count of a dual object conspiracy to commit wire fraud and offer and sell unregistered securities, the statement said. The charge carries a maximum prison sentence of five years and a fine of $250,000 or twice the gain to the defendant or loss to the victims, according to the statement.

Fort said that along with the J5, the development of the Nationally Coordinated Investigations Unit was a major accomplishment during his time as chief. The NCIU has become the hub for the division's data analytics work.

With both projects having moved beyond the pilot stage, Fort said he wanted them to start working together, noting there hadn't been much interaction between them yet. The way he envisioned them collaborating was the J5 team would develop cases and the NCIU data team would refine them before possible referral for prosecution.

"There needs to be greater alignment and discussion between the two," he said. Going forward, both projects "still need some human resources," but "are set up now to deliver as they have been delivering," Fort said.

The projects Fort highlighted as big accomplishments are in the vanguard of the agency's top enforcement priorities. IRS Commissioner Chuck Rettig has made international enforcement a focus for the agency, while many IRS executives have touted plans to use data analytics in enforcement efforts.

While Fort said the joint tax chief group grew out of discussions with his counterparts, he said the data unit was largely his idea and credited the team he put together to operate it for strong performance.

On his watch, the investigation unit created an algorithm and a model to identify potential criminal noncompliance with employment taxes, which Fort said was a major success. The effort has generated a significant number of referrals, and enforcement cases resulting from the NCIU's work on employment taxes are expected, he said.

Fort said he was also proud of the work the CI division had done to address fraud related to the novel coronavirus pandemic and said the division's agents "are involved in every major task force out there."

However, the pandemic also delayed bringing 10 new classes of special agents for the division on board for training, he said. That plan would have represented the first time the criminal division had hired and trained more than 200 special agents, Fort said. That hiring plan had been approved and is back on track now, he said.

The pandemic has also delayed adding IRS-CI agents in Singapore and Australia and at Europol's European Cybercrime Center in the Netherlands, Fort said. That group will considerably beef up international staffing, and the attache in Australia will join a financial crimes task force working in Canberra, he said.

Justin Cole, director of communication and education for the IRS' Criminal Investigation arm, told Law360 the division was waiting for the attaches to report because of the pandemic, but said "concepts and agreements" had been approved.

The creation of the J5 and data analytics teams aren't CI's only accomplishments on Fort's watch. The division's investigators have played a key role in some recent high-profile cryptocurrency busts, including of terrorism financing rings and an online child sexual exploitation market.

Fort launched his IRS career in 1991 as a special agent in the division's Baltimore district, according to an agency statement. He became deputy chief of the Criminal Investigation unit in August 2014, and was named chief in June 2017.

After he leaves his post, Fort said he'll take some time off, and "see what the future holds."