Democratic lawmakers are rallying behind former Vice President Joe Biden's drive to reshape requirements for opportunity zones, which could spark a revamp of the program to deliver more benefits to low-income residents should Biden win the election. 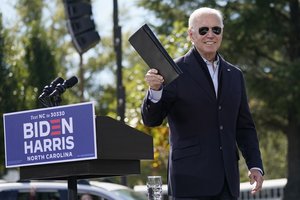 Key Democrats in both the Senate and the House said if their party wins control of the White House and both chambers of Congress, they want to work with Biden to try to reshape parameters for the nation's 8,700 opportunity zones authorized under the 2017 Tax Cuts and Jobs Act

But they also made clear contentious disputes over the scope of potential restrictions on the zones and their projects would need to be settled in both chambers if such legislation is to be advanced as part of a 2021 stimulus package or a broader tax measure aimed at reshaping the 2017 tax overhaul.

In the House, Rep. Karen Bass, D-Calif., chair of the Congressional Black Caucus, predicted there would be a strong drive in the next Congress to reshape opportunity zones if Democrats win the White House, driven by Biden and allies in Congress including Majority Whip Jim Clyburn, D-S.C.

"Reforming opportunity zones is a big priority. There have been gaps in the opportunity zone that have allowed gentrification to increase. There just needs to be more guardrails on it," Bass told Law360.

Clyburn told Law360 that several Democrats were concerned the benefits of the program go primarily to investors and developers rather than the people who live in the areas that the program is supposed to help.

With an eye to addressing these concerns, Biden has called for new requirements for opportunity zone funds and investors to disclose data on investments and community benefits, stronger oversight by the U.S. Department of the Treasury and incentives for opportunity funds to team up with nonprofits on projects to create jobs and help low-income residents.

In addition to Biden's general goals, Clyburn and Bass made clear they hoped to revive parts of H.R. 5042, legislation that Clyburn introduced in November known as the Opportunity Zone Reform Act. The bill would bar stadiums, self-storage facilities and residential rental housing projects aimed mainly at higher-income tenants from qualifying for the program and exclude census tracts with a median family income exceeding 120% of the national median family income from being designated as opportunity zones.

Sen. Ron Wyden, D-Ore., ranking member on the Senate Finance Committee, has offered S. 2787, the Opportunity Zone Reporting and Reform Act, which would impose restrictions similar to those in Clyburn's bill. But he also made clear he was open to developing other ideas in the next Congress.

"I want to do what fixes the problem," Wyden told Law360.

A study by the Economic Innovation Group, a bipartisan public policy organization, found a proposal in the Wyden and Clyburn bills to set a qualification cap at 120% of national median family income would exclude about 30 census tracts with higher median incomes that have been designated as opportunity zones under the exemption for contiguous tracts. Proponents argue the new standard would help direct more investment to low-income communities.

Republicans, for their part, have backed President Donald Trump's efforts to promote opportunity zones and defended the program against some Democratic plans to reshape it. For example, Sen. Jim Lankford, R-Okla., a member of the Finance Committee, said he was skeptical of tighter restrictions that could affect private investment in projects in existing opportunity zones.

"Those are folks looking for ways to be able to just mess with the opportunity zones. I would look at it, and see what the proposal is," Lankford said.

While opposing immediate changes to economic criteria for the zones, Lankford said he would be open to the idea of reshaping such standards "when there is a new set of census tracts" based on 2020 census data, "to make sure we are dealing with the highest-need areas."

Chris McCannell, a senior government relations consultant for GrayRobinson PA and an adviser to the Opportunity Funds Association, which represents funds with stakes in opportunity zones, said proposals by Wyden and Clyburn to screen existing opportunity zones based on national median family income could divide the two parties in the next Congress.

"If Democrats control the House and Senate and there's a Democratic administration, it could get some traction. But this could create complexity for current and future projects at a time when investment is needed to recover from the [COVID-19] pandemic," McCannell told Law360.

McCannell predicted GOP lawmakers would push back against proposals for major changes such as a new median income standard and a ban on certain types of projects, including stadiums.

"Changes like these would likely face opposition from Republicans, who believe they would infringe on the program's ability to live up to its full potential," McCannell said.

Stan Veuger, a resident scholar at the American Enterprise Institute, said a tougher median family income standard for opportunity zones would "eliminate some of the most egregious contiguous opportunity zones in big coastal metropolitan areas" but could also make the program "inaccessible to pockets of poverty surrounded by gentrified neighborhoods."

In light of such concerns, Sen. Ben Cardin, D-Md., a senior member of the Finance Committee, said he doubted there would be consensus support for a plan to reset the median family income cap.

"It's very hard to surgically draw it without adversely affecting some communities" that already depend on the program, Cardin told Law360.

While lawmakers continue to discuss restrictions on opportunity zones and on projects, Sen. Cory Booker, D-N.J., said he believed there was an opening to rally bipartisan support for efforts to encourage Treasury to develop forms for the collection of data on investors and investments in opportunity zones, and on the impact of projects in the zones.

Lawmakers in both parties have examined the program's regulations, promoted investments in the zones to address the pandemic's fallout and encouraged the Internal Revenue Service to provide flexibility for qualified opportunity funds and investors.

Booker said he hoped to work with Sen. Tim Scott, R-S.C., a member of the Finance Committee, and other lawmakers to promote a bipartisan proposal sponsored by Scott, S. 2994, that would require qualified opportunity funds and investors in the funds to file annual reports with data on investments and investors.

Rep. Ron Kind, D-Wis., a senior tax writer as a member of the House Ways and Means Committee, has backed a similar bipartisan proposal. It would require Treasury to make annual reports on qualified opportunity funds and to expand that report in the sixth year after enactment to include data on the impacts and outcomes of opportunity zones, including data on job creation, poverty reduction and new business starts.

"The reporting is critical," Booker told Law360. "There are so many projects. We need to stop the abuses to the program. But we need to expand the opportunity there to create more jobs and investment."