Biden's Tax Agenda May Depend On Laws Already At Hand

President-elect Joe Biden vowed on the campaign trail to stop international profit-shifting and corporate tax avoidance — but a potentially divided Congress could force him to look to existing legal authority, rather than legislation, to fulfill those promises. 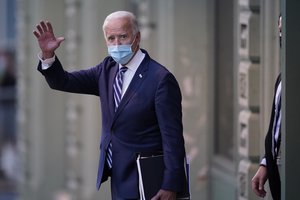 President-elect Joe Biden will need to find a way to work with Congress to implement methods of stopping international profit-shifting and corporate tax avoidance that he promised during the campaign. (AP Photo/Carolyn Kaster)

And while former President Barack Obama aggressively used the tax code to stem some of what were seen as the worst abuses, the incoming administration may find few avenues open to achieve the goals of Biden's campaign platform without help from Congress.

Critics and supporters debate whether it went far enough to stop tax dodging, but the 2017 Tax Cuts and Jobs Act

undoubtedly laid out a new global framework, with anti-abuse rules leaving little room for major reinterpretations or regulatory expansion. Biden's Treasury Department is likely to review the regulations of President Donald Trump's administration implementing the TCJA, but even the most controversial rules likely present complicated challenges and wouldn't necessarily affect clear base erosion.

Likely one of the first items to review for the new administration will be a carveout to the TCJA's global minimum tax, available to companies that have already paid foreign taxes of 18.9% or more in another jurisdiction.

The exemption applies to the TCJA's tax on global intangible low-taxed income, which is meant to stop U.S. corporations from shifting profits to low-tax jurisdictions. While the tax code currently exempts most foreign income from taxation, income determined through a formula to be GILTI is taxed at 10.5%, or half the overall 21% corporate rate. Because companies can apply foreign credits against 80% of their GILTI, the tax normally applies only when a company's foreign effective tax rate is 13.125% or lower.

But in some cases, statutory limitations reduce further how much a company can claim in foreign tax credits, increasing how much those companies pay due to the GILTI tax. Many taxpayers protested, claiming this seemed to go against the policy goals of the provision, and contradicted a statement in the joint conference report passed alongside the TCJA that GILTI would never apply on income taxed above 13.125%.

Using an interpretation of the law that some have deemed questionable, Treasury created a high-tax exclusion for GILTI, similar to the one that applies to income under Subpart F, the long-standing controlled foreign corporation rule that immediately taxes the global passive income of U.S. corporations. While the regulations do not achieve a 13.125% rate, they offer some relief to companies operating in high-tax countries.

Many Democratic lawmakers criticized Treasury's decision, claiming it was a giveaway to wealthy corporations.

"The Trump administration essentially unilaterally expanded the benefits that were in the law," said Steve Wamhoff, director of federal tax policy at the Institute on Taxation and Economic Policy, a left-leaning think tank and advocacy organization. "Logically, this would be the place to start."

The Biden transition team did not respond to a request for comment.

But while the high-tax exclusion has become a political flashpoint, repealing it — especially as the economy slowly begins to recover from the novel coronavirus pandemic — may not be an easy policy choice for the administration.

"The high-tax exclusion would not necessarily target the companies they were talking about in their rhetoric," said Daniel Bunn, vice president of global projects at the Tax Foundation, a conservative economic think tank in Washington, D.C. "By definition, high-tax exclusions are for those companies that are paying high foreign taxes."

The GILTI provision, like many parts of the TCJA, restricts the ability of taxpayers to manage economic losses in down years. Corporations cannot use one year's foreign losses to count against another year's GILTI inclusion, and the formula for determining GILTI can be tilted by loss-making subsidiaries.

What could be a nuisance for some companies in cyclical industries became a major problem across the economy as COVID-19 forced commerce into an unprecedented downturn.

Aside from helping to manage foreign tax credit limitations, Treasury's high-tax exclusion could be important for U.S. companies that see foreign income surge before domestic income, due to the uneven economy or tax structures that allocate the steadiest profits to offshore distributors. Not only would those companies pay more in GILTI tax, but the reduced net operating losses would create more income taxed at the full 21% rate.

"There is no policy justification to say that a U.S. company should have to pay double tax on their GILTI," said Danielle Rolfes, a partner at KPMG LLP and the former international tax counsel at Treasury from 2012 to 2017.

Treasury also created some carveouts to the TCJA's base erosion and anti-abuse tax, which generated controversy among critics. The BEAT reduces deductions on intercompany payments such as royalties or interest, if they are determined — again, through a formula — to be base-eroding. Regulations under this provision exclude interest payments required under U.S. banking rules, and some foreign currency hedging transactions.

While many claimed these carveouts were too taxpayer-friendly, they aren't associated with clear profit-shifting to low-tax jurisdictions or other examples of egregious tax avoidance that Biden excoriated on the stump.

"There's generally much more bipartisan consensus at the level of Treasury regulations than people would think," said Brian Jenn, a partner at McDermott Will & Emery LLP and a former deputy international tax counsel at Treasury.

As several high-profile companies considered or executed an inversion — conversion to a tax entity with an offshore parent, usually through a merger with a smaller foreign company — the Obama administration issued Section 385 rules, hoping to discourage the maneuver. The rules did not affect corporate residency directly, but restricted the use of interest deductions on intercompany debt, which are seen as a major driver of inversions because other rules effectively prevent U.S. companies from using interest to shift income offshore.

The Trump administration fully repealed part of the Section 385 rules, which required companies to produce greater documentation on loans to related parties. It also announced plans to slim down — but not fully eliminate — Section 385 rules that recharacterize debt as nondeductible equity. The moves provoked criticism from some Democrats, and have not yet gone into effect, with Treasury consumed with new regulations related to the pandemic and relief bills.

While the Section 385 rules could be resuscitated, their effectiveness would now be limited due to further restrictions on interest deductibility included in the TCJA. It is unclear how much genuine earnings-stripping continues today given the deductibility limits in IRC Section 163(j)

, which are in line with those recommended by the Organization for Economic Cooperation and Development in its base erosion and profit-shifting standards.

The tax code includes many provisions that if read broadly could give Treasury expansive powers to combat structures used in tax avoidance. The economic substance doctrine, codified in Section 7701(o)

, allows the department to invalidate corporate structures without a "substantial purpose" beyond reducing federal tax. Section 482

, which dictates transfer pricing rules, allows Treasury to allocate income between related parties to "prevent evasion of taxes or clearly to reflect the income" of those entities.

Those sections may sound powerful and broad to a layman, but in practice they've been used narrowly based on decades of court precedents and international agreements. Most experts doubt that the new administration would take an aggressive approach to rethink application of international tax law, especially when the potential benefit is unclear.

"I don't think there are silver bullets," said Rolfes at KPMG.