As Joe Biden's team races to staff his administration, ensuring that the U.S. Treasury Department has key decision-makers in place to negotiate an agreement with other OECD countries on international taxes could be a significant challenge. 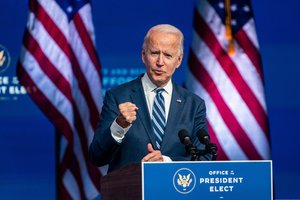 Joe Biden's team will address tax concerns in the digial economy in 2021. (Getty)

The Organization for Economic Cooperation and Development's project to address tax concerns with the digital economy faces a mid-2021 deadline to reach a consensus. Without an agreement, the chances to prevent countries from enacting further unilateral taxes on revenue from online transactions may pass, and trade wars over the issue could be inevitable.

While there are some indications that Biden's advisers are aware of the issue, whether his administration will prioritize the negotiations amid a global pandemic and economic downturn is a pressing question on the minds of many tax practitioners.

Brian Jenn, who worked in Treasury's Office of Tax Policy from 2012 until 2018, noted that it took the Trump administration months to fill top positions. Chip Harter, the deputy assistant secretary for international tax affairs, didn't begin his job until September 2017. He has said he will leave the position at the end of this month.

"Just based on the transition that I saw from Obama to Trump, even though they were trying to move quickly, it took quite a while to get a full complement of political appointees in place," Jenn said. "I would not expect that role to be filled before April at the earliest, which itself raises issues for the possibility for having any kind of agreement at the OECD by mid-2021."

The OECD project, which began in 2017 at the behest of the Group of 20 coalition of advanced economies, was originally set to be completed by the end of 2020. But as the coronavirus pandemic slowed down discussions and the U.S. continued to oppose key proposals, officials from the organization admitted in October that they could not produce an agreement by the end of the year, and set mid-2021 as the new deadline.

While anything can happen in international diplomacy, the chances that the negotiations could continue past next summer are remote. Patience with the talks among government officials in Europe and around the world, who claim global pandemic restrictions have highlighted the need to ensure that technology companies don't escape taxation, has almost run out. Many countries have either enacted their own measures, or are set to do so next year.

France recently notified companies that it will begin collection of the country's 3% digital services tax, which targets revenue from online activities such as data collection or web advertising. The European Union is also set to debate a new digital levy in early 2021.

The United States is set to enact retaliatory tariffs against France in January, before the Biden administration takes office, with potential tariffs against other countries with digital services taxes in preparation.

In mid-January the OECD will host public comments on two proposals to overhaul the global tax rules. The first proposal, Pillar One, would require that countries update existing bilateral tax treaties to give jurisdictions the ability to tax income from some transactions, regardless of whether the taxpayer is physically present. The second proposal, Pillar Two, would craft recommended model legislation for countries to tax the global income of companies headquartered in their jurisdictions if it isn't adequately taxed elsewhere.

Both proposals are technically complex, and involve a number of knotty policy choices. While OECD staffers can continue to develop the legal language, they'll need top officials from all of the participating countries to finalize an agreement.

"There are really good, competent people at Treasury now, and at least some number of them will stay over," said Michael Plowgian, a principal at KPMG LLP and former adviser to the OECD and Treasury. "But the issue for something like the OECD negotiations will be, do any of those people have the authority to speak on behalf of the administration?"

The Biden administration may not significantly change the current U.S. stance, which opposes digital services taxes as well as proposals that deviate too far from existing tax principles. But the new White House may need to develop a nuanced stance, given Biden's campaign focus on corporate tax avoidance, and ensure that Treasury carry that vision out when dealing with the rest of the world.

"At the end of the day, it really comes down to trust," Plowgian said. "Does the White House trust the folks who have been in a previous administration, particularly from a different party? Will they give them the authority to make those calls?"

While not all political appointees require confirmation by the Senate, they nonetheless take time for an administration to find, vet and prepare.

"As with any transition, there are a lot of moving pieces and the question is what priority is given to one piece or the other," said Stephen Shay, an adjunct professor at Boston College Law School and the former deputy assistant Treasury secretary of international tax affairs from 2009 to 2011. "Secretary-designate Yellen obviously is the key person in deciding with the transition team who she wants to consider for tax roles, and that process can be and probably already is starting."

Once in place, the officials will face a steep learning curve to understand not only the policy details of the OECD proposals, but also the negotiating partners.

"This isn't going to be like a normal situation where the new appointee can get to know his counterparts at other countries and the OECD at coffee breaks and less formal settings. He's just going to have to jump into Zoom meetings," said Jenn, who is now a partner at McDermott, Will & Emery LLP. "That's going to be a very challenging environment to really hash things out."

But the biggest question for observers of the process is whether the new administration, taking office at a time of monumental challenges and crises, will prioritize the digital tax negotiations. While OECD officials have said the economic impact of disunity on digital taxes could be a significant global hit, it's still only one of dozens of issues on the Biden administration's radar.

Barbara Angus, global tax policy leader for EY, said she believed Biden's team was looking into the issue, but hoped the rest of the world didn't underestimate the challenge that the transition would present.

"I'm confident that thinking about this has begun, but it will take some time," she said while appearing at a web conference held by the International Fiscal Association on Tuesday. "I appreciate that there is urgency about this, but I'm hopeful that the rest of the world will also appreciate that it will take some time for the new administration to be thoughtful about a really difficult topic."

Bruno Le Maire, the French minister of economy and finance and a strong proponent of greater taxation of tech multinationals, said at a public event on Monday that he would soon talk with Biden's advisers about the digital services tax and OECD negotiations, according to news reports. Biden's team did not confirm the meeting.

After the public consultation on Jan. 14 and 15, the inclusive framework — an advisory council to the OECD made up of 137 nations and territories that must also sign off on the agreement — will meet at the end of the month, according to Pascal Saint-Amans, the OECD's director for tax and administration.

After that, there would be an uncertain period of "no man's land," as the organization continues to develop the proposals and waits for an "interlocutor" from the U.S. to participate, Saint-Amans said during a web panel hosted by the University of Oxford on Monday.

Saint-Amans did not comment further on the process to Law360 when asked. The Biden transition team and the Treasury Department did not respond to requests for further comment.