Senate lawmakers said Wednesday that congressional leaders were close to an agreement on a pandemic emergency relief package that includes extended unemployment benefits, a second round of stimulus checks and renewal of dozens of expiring tax provisions. 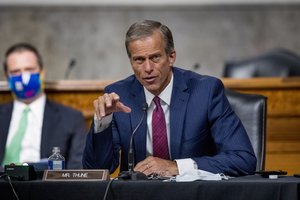 Sen. John Thune, R-S.D., told reporters the latest negotiations involve providing economic impact payments of as much as $700 per individual and $1,400 per family, but they would be subject to conditions and triggers. (AP Photo/Andrew Harnik)

Details and legislative text of the tentative agreement haven't been officially released, but Sen. John Thune, R-S.D., told reporters that lawmakers are hoping to approve the deal in time for Congress to pass it by Friday as part of an omnibus spending bill to keep the federal government open.

Thune said the latest negotiations involve providing economic impact payments of as much as $700 per individual and $1,400 per family, but they would be subject to certain conditions and triggers. The payments are less than those included in the Coronavirus Aid, Relief and Economic Security Act

passed by Congress in March, which authorized the Internal Revenue Service to pay $1,200 to individuals and $2,400 to families, with amounts phased out based on income levels.

"It's not going to be the full-blown thing that some of our members and some of their members want to see," Thune said, noting that lawmakers want to keep the total cost of the deal equal to the $908 billion price tag of a bipartisan compromise proposal recently unveiled by House and Senate lawmakers.

"As of 3 o'clock yesterday, there was good hope of reaching an agreement. I can't get into those details until they're announced," Grassley said. "But there was some question that if we didn't have a COVID package, whether that's with or without the omni — and it'll probably be in the omni — then we may not have extenders."

On Monday, Sens. Joe Manchin, D-W.Va., Susan Collins, R-Maine, and other so-called moderate legislators unveiled the Emergency Coronavirus Relief Act of 2020, a bill that among other things would clarify that business expenses paid for with loan proceeds from the CARES Act's Paycheck Protection Program would be tax deductible. Many of the provisions in the Manchin-Collins proposal have become the basis of the emerging agreement that lawmakers hope will pass Congress by Friday.

The 525-page proposal would modify relief provisions enacted in the CARES Act, signed into law in March to combat the economic effects of COVID-19, the respiratory disease that has claimed more than 300,000 American lives. It would also provide $25 billion in tax-free rental assistance to state and local governments, lower by 50% the excise tax on private schools and colleges imposed by the 2017 Tax Cuts and Jobs Act

and boost funding for the New Markets Tax Credit program.

Lawmakers have engaged in stop-and-start negotiations with Trump administration officials over a successor to the CARES Act since this spring. A major sticking point was whether to provide additional funding for state and local governments and liability protections for businesses that might get sued by customers and employees because of the way they handled COVID-19 safety.

The Manchin-Collins compromise proposal separated those two items into a separate measure that lawmakers could take up at a later date. The emerging agreement appears to have left those issues by the wayside.

"I think that the Democrats are very wedded to state and local aid, but I think everybody in the bipartisan group and on our side, pretty much concluded a long time ago" that the way to get to the finish line is "if one side gave up state and local and the other gave up liability protections," Thune said.

Thune said Democrats wanted to get the economic stimulus checks in return for backing off on state and local aid.

The stimulus checks are "frankly something that the White House also has been interested in," Thune said.

Sen. Josh Hawley, R-Mo., told reporters he was awaiting the legislative text of the proposal to see what amount the negotiators settled on for the stimulus checks.

"I think it should be $1,200. I think we should do at least what we did in the CARES Act," he said. "Let's remember, when they started out they were gonna get zero, zero. So, this is a good movement in the right direction."

In a Senate floor speech, Senate Minority Leader Chuck Schumer, D-N.Y., indicated that negotiators were close to reaching a tentative agreement to provide COVID-19 emergency relief, even though Democrats wanted to go further in the negotiations.

"We Democrats would have liked to go considerably further, but this won't be the last time Congress speaks on COVID relief," Schumer said. "Right now, we must address this emergency over the short term."