Senate Republicans met with President Joe Biden Monday evening to garner support for trimming back his $1.9 trillion coronavirus relief plan and its economic stimulus payments as congressional Democrats took steps to pass it without GOP help. 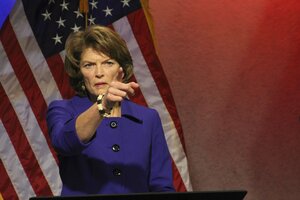 Republicans including Lisa Murkowski of Alaska would like a new round of $1,000 stimulus payments that would begin phasing out for individuals earning more than $40,000 annually. (AP Photo/Mark Thiessen)

The request for a White House meeting with 10 Senate GOP lawmakers came in a letter the group sent Biden on Sunday seeking support for what they consider a $618 billion compromise proposal to allow the Internal Revenue Service to cap a new round of economic stimulus payments of $1,000 to individuals earning $40,000 annually. The GOP counteroffer had little in common with Biden's American Rescue Plan, which the president unveiled in January calling for $1,400 checks to an expanded group of Americans.

Emerging from the two-hour meeting, Sen. Susan Collins, R-Maine, said the lawmakers had a "frank and very useful" discussion with Biden, Vice President Kamala Harris and their key aides.

"I wouldn't say that we came together on a package tonight. No one expected that in a two-hour meeting," Collins said. "But what we did agreed to do is to follow up and talk further at the staff level ... on how we can continue to work together on this very important issue."

In the letter from Collins, Sen. Lisa Murkowski, R-Alaska, and other Republicans, the lawmakers said that their proposal reflected many of Biden's stated priorities. "With your support, we believe that this plan could be approved quickly by Congress with bipartisan support," the letter said.

According to a summary of the proposal, the Republicans said they would support $220 billion in $1,000 direct stimulus payments for individuals that would begin phasing out at incomes above $40,000 and be capped at a $50,000 income level. For joint filers, the checks would begin phasing out at those earning $80,000 and would be capped at $100,000. Republicans also offered to add funding for schools, child care providers, unemployment benefits, and expanding the effort to combat the coronavirus with money for testing, medical equipment, rural hospitals and Native American health.

Ahead of the GOP meeting with Biden, Senate Democrats rejected their proposal.

"We can't keep jumping from cliff to cliff every few months. Workers who have lost their jobs through no fault of their own shouldn't be constantly worrying that they are going to lose their income overnight," said Wyden, who is the incoming chairman of the Senate Finance Committee, which oversees federal jobless benefits.

Congressional Democrats have threatened to employ an often-used budget procedure called reconciliation that would allow them to bypass the need for Republican votes and pass Biden's $1.9 trillion COVID-19 relief bill. Budget reconciliation would require a simple majority vote in the Senate, which Democrats and two independent senators would have if Harris breaks a 50-50 tie between the political parties.

Senate Majority Leader Chuck Schumer, D-N.Y., and House Speaker Nancy Pelosi, D-Calif, took the first step in that process Monday afternoon, unveiling a budget resolution that if passed by both chambers would allow Democrats to fast-track a vote on the Biden bill using the budget reconciliation procedure.

"Congress has a responsibility to quickly deliver immediate comprehensive relief to the American people hurting from COVID-19," Pelosi and Schumer said in a joint statement. "We are hopeful that Republicans will work in a bipartisan manner to support assistance for their communities, but the American people cannot afford any more delays and the Congress must act to prevent more needless suffering."

In 2017, House and Senate Republicans used the same budget procedure to pass the Tax Cuts and Jobs Act

without votes from Democrats.

Biden's legislative proposal is intended to ensure the Treasury Department has the flexibility and resources it needs to deliver stimulus checks to the families that need them most. Among those are millions of families that have yet to receive the $1,200 checks approved under the Coronavirus Aid, Relief and Economic Security Act

It would extend paid emergency sick leave, which is funded through an employer tax credit program. Biden's proposal would eliminate exemptions from the sick-leave requirement for employers with more than 500 and fewer than 50 employees.

He also proposed a one-year expansion of refundable child care tax credits so families could get a reimbursement of half the cost for children up to age 13. He proposed a credit of up to $4,000 for one child or $8,000 for two or more children, but the benefit would phase out for families making $125,000 to $400,000.