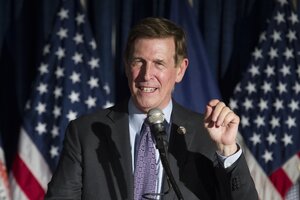 Rep. Don Beyer, D-Va., said he hoped undocumented workers with ITINs could benefit from a temporary expansion of the earned income tax credit for workers who don't have children. (AP Photo/Cliff Owen)

Several Democrats said the reconciliation bill for Biden's $1.9 trillion American Rescue Plan that was passed by the House, 219-212, on Feb. 27 would bolster efforts to ease restrictions on tax breaks for about 4.5 million immigrant workers with ITINs. Proponents said expanded access to tax incentives could provide a bridge to Biden's plan to provide an eight-year pathway to citizenship and full tax benefits for the nation's total population of 11 million undocumented workers.

On the other side, Republicans have pushed back against two proposed tweaks to the tax code aimed at allowing an immigrant worker with an ITIN who has children without Social Security numbers or is separated from a spouse to qualify for the earned income tax credit for workers who don't have children.

that bars undocumented workers from receiving the earned income tax credit if their children do not have Social Security numbers.

GOP procedural objections and amendments were being explored for possible debate later in the week, when the reconciliation bill is set to come to the Senate floor. The Senate is expected to send a revised version of the filibuster-proof reconciliation bill, excluding a proposal for a $15 hourly minimum wage, back to the House for a vote of final approval next week. Lawmakers are pushing to complete the measure before the March 14 expiration of expanded jobless aid.

Reps. Don Beyer, D-Va., and Jimmy Gomez, D-Calif., both members of the House Ways and Means Committee, said the proposed expansion of access to the earned income tax credit for workers without children was needed to counter fallout from COVID-19, the respiratory disease caused by the novel coronavirus.

"They may not yet be full American citizens, but they are paying taxes and contributing to our economy and our culture in important ways. So, it's only fair for us to help them too," Beyer told Law360.

He said he hoped undocumented workers with ITINs would also benefit from other measures in the bill, which would provide a temporary expansion for 2021 of the earned income tax credit for workers without children, the child tax credit and the child and dependent care credit.

Christine Speidel, a professor at Villanova University Charles Widger School of Law, praised the reconciliation bill for including several changes for undocumented workers with ITINs, who she said sometimes support extended families including nieces and nephews.

"I hope this proposal is a sign that Congress is open to shifting its thinking about providing or denying the EITC on the basis of an entire 'family unit.' Benefits provided to U.S. taxpayers should not be denied merely because a taxpayer is supporting noncitizen household members," Speidel told Law360.

In the Senate, Sen. John Cornyn, R-Texas, a Finance Committee member and former Republican whip, said he and other Republicans had concerns about the two provisions aimed at helping undocumented workers who have ITINs. He said they were exploring potential procedural objections or amendments to reshape or delete provisions aimed at helping undocumented workers with ITINs.

"It seems like it's a workaround to get money to people who aren't legally entitled to it or shouldn't be entitled to it because they violated our immigration laws. It's a bad idea," Cornyn told Law360.

In recent years, Cornyn and other Republicans have pushed to tighten restrictions on immigrant workers with ITINs. For example, the 2015 Protecting Americans From Tax Hikes Act

included a requirement for revalidation of ITINs every five years, and the 2017 Tax Cuts and Jobs Act

Sen. Todd Young, R-Ind., a member of the Finance Committee and former chairman of the National Republican Senatorial Committee, said he and other Republicans believed the two provisions in the pandemic relief bill could be vulnerable to Byrd rule points of order. The rule targets reconciliation measures that create deficits outside the usual 10-year budget window or that do not have a significant impact on the budget. Objections raised under the rule can only be waived by a 60-vote Senate majority.

"During this pandemic, in a time of limited resources, we should be targeting our resources towards American citizens and to legal residents," Young told Law360.

Young laid the groundwork for procedural objections by winning approval, 58-42, on Feb. 4 of a largely symbolic amendment to the fiscal 2021 budget resolution. The add-on expressed opposition to any bill "to allow illegal immigrants to receive economic impact payments or any other similar direct, tax-based, temporary financial assistance."

While Republicans looked for ways to curb provisions for immigrant workers with ITINs, Sen. Robert Menendez, D-N.J., a member of the Finance Committee, said he hoped to rally opposition to any potential GOP-backed procedural objections.

to allow married couples with mixed immigration status to qualify for pandemic relief. The law, enacted in December, allowed married couples of one spouse with an ITIN and the other with a Social Security number to retroactively qualify for economic impact payments authorized last March in the Coronavirus Aid, Relief and Economic Security Act

, and to also receive a second round of similar payments.

Menendez said the enactment of provisions for immigrant workers with ITINs in the reconciliation bill could clear the way for other measures aimed at expanding access to tax incentives for tax-paying noncitizens.

"It would be another step forward towards justice and equity in our system of delivering benefits and in our immigration system," Menendez told Law360.