The streamlining of tax information reporting requirements by online platforms in the $1.9 trillion pandemic relief plan sets the stage for a new push by Democrats to expand incentives and other benefits for self-employed workers in the nation's gig economy. 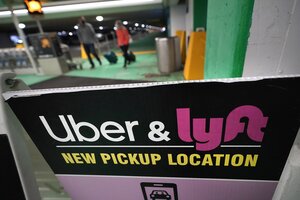 Uber, Lyft and certain other online platforms already report self-employed workers' income via a form with a $600 threshold, which became the standard under the pandemic relief bill. (AP Photo/Steven Senne)

The American Rescue Plan changed the threshold for an online platform to file Forms 1099-K to report self-employed workers' third-party network transactions to a flat $600, from the old benchmarks of $20,000 and 200 transactions under a 2008 law.

The pandemic relief measure was contained in a reconciliation bill that President Joe Biden signed Thursday.

Proponents said the measure would curb tax underpayment when it takes effect for tax year 2022. That's because the new standard would match the $600 threshold for Form 1099-NEC, which replaced Form 1099-MISC for some uses in 2020.

Several senior Democrats said a leveling of filing thresholds for tax information returns would spur new efforts to ensure self-employed workers pay taxes and receive incentives. Among the items being discussed are ideas to expand access for gig workers to tax breaks, jobless aid and a range of benefits either through the government or online platforms.

"That wasn't intended to be a revenue raiser. That was just to clear up an issue," Yarmuth told Law360. "There was an ambiguity in law."

Nevertheless, the congressional Joint Committee on Taxation has estimated the change will raise $8.4 billion over 10 years.

"The gig economy is transformative. There are parts of it that have worked quite well. But other parts need improvement," Neal told Law360.

A 2019 study by the Treasury Inspector General for Tax Administration pointed to the need for better tax information reporting to deal with underpayment of the self-employment tax, which accounted for more than 10% of the nation's overall $381 billion annual tax gap.

By ensuring more gig workers pay all taxes owed, Neal and Yarmuth said the new measure could lay the groundwork to expand tax incentives and benefits for them. A recent study by ADP Research Institute, an arm of ADP Inc., the payroll processing giant, estimated gig economy workers accounted for about 16.4% of the nation's labor force in 2019, up 2.2 percentage points since 2010.

On the other side, some Republicans said they would push to raise the filing threshold for tax information returns used by online platforms and curb efforts by the IRS to classify some independent contractors as employees in order to enforce payroll taxes. They have looked to seize momentum from the November approval by California voters of a ballot measure to allow companies to classify "app-based ride share and delivery drivers" as independent contractors, not employees subject to certain compensation and labor standards.

Rep. Tom Rice, R-S.C., a member of the Ways and Means Committee, said he wanted to set a higher information reporting threshold and to help companies avoid having to deal with criteria used by the IRS to draw a line between independent contractors and employees.

Rice and Senate Minority Whip John Thune, R-S.D., said they hoped to revive a proposal from the last Congress known as the New Economy Works to Guarantee Independence and Growth Act, which would set a $1,000 tax information reporting threshold and shield companies against IRS payroll tax enforcement efforts. The measure would clear the way for contracts stating that an independent contractor is not an employee and would provide for 5% tax withholding on the first $20,000 in income.

"If you're a gig worker, it's a good thing because you get to keep working as an independent contractor," Thune told Law360.

While some Republicans sought to restructure the information reporting threshold as part of a framework for companies to cement relationships with independent contractors, Caroline Bruckner, a tax professor at the American University Kogod School of Business, said she doubted such efforts would get much traction with Democrats. She said the move to equalize tax information reporting thresholds would ensure payment of self-employment taxes so workers can qualify for Social Security benefits.

"In the middle of a pandemic, I really think it's pretty clear information reporting serves a multitude of purposes on its own," Bruckner told Law360.

For their part, several senior Democrats said there could be opportunities to expand incentives for self-employed workers as part of a potential fiscal 2022 reconciliation bill for parts of Biden's Build Back Better recovery plan or in other legislation.

Sen. Ron Wyden, D-Ore., chairman of the Senate Finance Committee, said he hoped to build on items enacted in March 2020 in the Coronavirus Aid, Relief and Economic Security Act

"I want to make sure that gig workers, who no one was even thinking about in the 1930s when unemployment benefits were put in place, start getting a fair shake," Wyden told Law360.

Sen. Mark Warner, D-Va., a senior member of the Finance Committee, predicted there would be more efforts to expand tax breaks and other incentives for gig workers.

"This may be the starting point of a discussion about benefits," Warner told Law360.