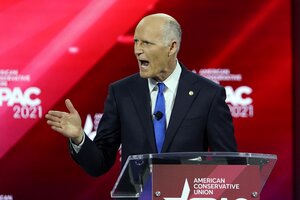 Sen. Rick Scott, R-Fla., said Republicans would counter Biden's efforts to advance his recovery plan by emphasizing concerns that it would lead to higher taxes for individuals and businesses and bigger deficits. (AP Photo/John Raoux)

would pave the way for tax hikes in a potential fiscal 2022 reconciliation bill to move parts of Biden's recovery plan.

They have attacked two revenue-raising proposals in the new law: a tougher tax data reporting requirement aimed at gig workers and repeal of an allowance set to take effect in 2021 for corporations to make a one-time election to allocate interest expenses globally. The repeal is estimated to raise $22.3 billion over 10 years.

The GOP blitz against potential tax hikes in the next reconciliation bill comes as Biden prepares for a speech in Pittsburgh Wednesday to unveil an infrastructure framework for a five-year surface transportation reauthorization, which represents the first part of his economic recovery plan.

Jen Psaki, the White House press secretary, said on "Fox News Sunday" the plan's second phase would be unveiled in April. It would cover health care, child care and other priorities, and would offer "some ways to pay for that," she said.

Sen. Rick Scott, R-Fla., chairman of the National Republican Senatorial Committee, said Republicans would counter Biden's efforts to advance his recovery plan by emphasizing concerns that it would lead to higher taxes for individuals and businesses and bigger deficits. Scott and Sen. Mike Crapo, R-Idaho, voiced concern that a second reconciliation bill would require tax hikes to finance Democratic priorities and would provide an opening for Democrats to repeal or roll back parts of the 2017 Tax Cuts and Jobs Act

Crapo said Democrats might be forced to include revenue-raising offsets or spending cuts in the reconciliation bill to avert potential GOP Byrd rule points of order against reconciliation measures that create deficits outside the 10-year budget window.

Scott said his unsuccessful attempt to get a Senate floor vote last Wednesday on a proposal to repeal the expansion of information-reporting requirements for companies with self-employed workers could be a template for similar efforts by Republicans to attack Democratic revenue-raising proposals. He sought to repeal a new mandate for an online platform to file a Form 1099-K to report a self-employed worker's third-party network transactions when they reach a flat threshold of $600, instead of the old benchmarks of $20,000 and 200 transactions under a 2008 housing law.

"Biden promised he wasn't going to raise taxes on people earning less than $400,000. They just did it, and he signed it," Scott told Law360. He based his criticism on a congressional Joint Committee on Taxation study showing the item would raise $8.4 billion over 10 years from a broad swath of self-employed workers.

Democrats countered by blocking Scott's request for a floor vote on his proposal. They argued the lower reporting threshold was not a tax hike and only enforced existing tax obligations.

Senate Finance Committee Chairman Ron Wyden, D-Ore., said the provision would strengthen tax enforcement without raising any levies. He said it would ensure that self-employed workers file tax returns to qualify for a temporary expansion for one year of the earned income tax credit for workers without children.

"We want to make sure that every eligible worker can get that financial help," Wyden said on the Senate floor.

While defending the new pandemic response law, Wyden and other Democrats have emphasized that no decisions have been made about tax hikes and other components of the forthcoming reconciliation bill.

In response to GOP warnings about looming Democratic tax hikes, Sen. Chris Coons, D-Del., said the campaign by the administration and party leaders to promote the new pandemic response law was intended in part to clear the way for the reconciliation bill to advance tax priorities. He and several other senior Democrats said a reconciliation bill could combine items jettisoned from the highway bill with other priorities from the second part of Biden's recovery plan.

"It's important to help the American people understand that it is possible for us to do both things: to help recover from the pandemic and reopen our economy," Coons told Law360.

In a Thursday news conference, his first as president, Biden advocated for more incentives for working families without laying out specific proposals to reshape the tax code.

"I want to change the paradigm where we start to reward work, not just wealth," Biden said.

"We have to make sure people continue to understand that every single Republican voted against a bill that helped them through a crisis," Peters told Law360.

Peters stressed no decisions had been made on whether to move toward goals in Biden's 2020 campaign platform of raising the corporate rate to 28% from 21% and the top individual rate to 39.6% from 37%.

In the House, Rep. Kevin Brady, R-Texas, ranking member on the Ways and Means Committee, has said a second reconciliation bill would lead to a "Washington tax grab," which would have "enormous harmful consequences for American families and Main Street businesses."

Ways and Means Chairman Richard Neal, D-Mass., has stressed he plans to mark up an infrastructure tax package. But he also has left the door open to moving contentious tax items in a second reconciliation bill, including potential business tax hikes to help pay for a permanent extension of the temporary 2021 expansion of the child tax credit.

Neal and other senior Democrats have said that key decisions will be made in the coming days as Biden lays out tax priorities in his fiscal 2022 budget blueprint.

While Democrats prepare to deal with Biden's tax wish list, Republicans in both chambers have criticized the repeal of the allowance for worldwide allocation of corporate interest expenses, set to take effect in 2021, as a weakening of incentives for business investment. And they have looked to push back against higher taxes by trying to repeal parts of the new law aimed at raising revenue.

With that goal in mind, Scott said he would continue pushing his proposal to repeal the new $600 reporting threshold for Form 1099-K, which was designed to match the reporting benchmark for Form 1099-NEC, used by many businesses to report income of self-employed workers.

to repeal a mandate in the 2010 health care overhaul

for the filing of Form 1099 to report aggregate payments of $600 or more to a single recipient for goods and other property or to a corporation. And he said Republicans would continue to criticize parts of the pandemic response law just as they attacked President Barack Obama's 2009 stimulus law before sweeping the 2010 elections.

"It's going to be a big loser just like Obama's stimulus was," Scott said.