A drive by Democrats to strengthen tax enforcement aimed at corporations and the wealthy has gained momentum on Capitol Hill following estimates the IRS is losing out on as much as $1 trillion annually in taxes owed but not paid. 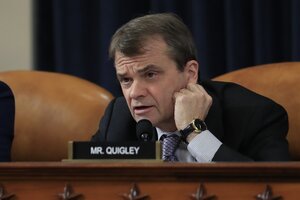 Several key Democrats said the rough estimate by the Internal Revenue Service commissioner, Chuck Rettig, of a current annual tax gap of $1 trillion would bolster support for more IRS funding and enforcement measures targeting businesses and wealthy taxpayers. That estimate, which Rettig gave in a Senate hearing on Tuesday, is up from the official estimate of $441 billion annually from 2011 to 2013, before factoring in late payments and enforcement work.

Items on the table that could move in tandem with parts of President Joe Biden's recovery plan and additional IRS funding include mandates for new information reporting forms and broader audits of corporations and wealthy taxpayers.

Rep. Mike Quigley, D-Ill., who chairs the Appropriations subcommittee with purview over the IRS, said Rettig's testimony would fuel support for Biden's proposed 10.4% increase in IRS funding to $13.2 billion in fiscal 2022 and new tax enforcement measures aimed at corporations and wealthy taxpayers. He said such tax enforcement measures could be developed along with the higher business levies Biden sought to support his recovery blueprint, which includes an infrastructure plan and an emerging package of family incentives.

"We've got a $1 trillion tax gap. We've got to do something. That's money that could help keep us safe and make sure people get quality education and health care," Quigley told Law360.

Quigley predicted there would be a strong push to move toward Biden's request for an upgrade of as much as $900 million for enforcement, mainly to collect more unpaid taxes from big corporations and high-income individuals.

A summary of Biden's plan said the administration would be developing a broad enforcement initiative in the coming weeks to address alleged tax evasion by corporations and high-income taxpayers. It outlined a tax enforcement agenda that would "eliminate parts of the tax code that are too easily abused," allow the IRS to conduct more audits and "make sure that corporations pay their fair share."

The enforcement plan would follow up on efforts by Rettig to make the case for upgrades in IRS funding and initiatives to reshape the agency and improve taxpayer experience and training.

In addition to Biden's emerging tax enforcement agenda, some liberal Democrats have promoted plans to prod the IRS to expand audits of corporations and wealthy taxpayers and to automatically collect more data on their finances.

For example, Rep. Ro Khanna, D-Calif., has backed a proposal, H.R. 1200, to provide $70 billion in IRS funding over 10 years combined with new mandates to audit 95% of corporations with more than $20 billion in assets and 50% of taxpayers with more than $10 million in income. The bill also would require banks to file a new tax information form — similar to the Form 1099-B for investment brokers — to report deposits, withdrawals and other transactions of wealthy customers, including pass-through business owners.

. They have opened the door to exploring new measures that could expand information reporting by banks and virtual currency brokers, but have taken a cooler stance toward mandated audit rates such as those proposed by Khanna and other liberal lawmakers.

Wyden also has called for developing a comprehensive plan to reduce the tax gap, including more IRS funding and targeted enforcement efforts.

lowering the threshold for an online platform to file a Form 1099-K to report a self-employed worker's third-party network transactions to a flat $600, instead of the old benchmarks of $20,000 and 200 transactions under the 2008 Housing and Economic Recovery Act.

Proponents of increased information reporting and mandatory audit rates for big corporations and wealthy taxpayers have pointed to a 2020 Congressional Budget Office study that found IRS examinations have declined 46% for corporate returns and 37% for individual returns. The report said $20 billion in increased IRS funding over 10 years would yield $61 billion in revenue, while a $40 billion funding upgrade would raise $103 billion.

However, former IRS Commissioner John Koskinen said he did not think mandatory audit rates would be an effective way to improve tax enforcement.

"The better approach is to increase funding for IRS enforcement and let the agency determine, with its automated review of returns, where to apply those resources," Koskinen told Law360 in an email.

Charles Rossotti, another former IRS commissioner, confirmed he had discussions with Khanna's office on one facet of the lawmaker's bill: the bank information reporting requirement. He said that provision of the Khanna bill was similar to a proposal he helped develop for a new information reporting form for banks, dubbed Form 1099-NEW.

Rossotti said more IRS funding was certainly needed. However, he noted it could take time for lawmakers to rally behind a new information reporting requirement for banks, which he envisioned as part of a longer-term strategy for addressing the tax gap.

"What we are trying to do is set the stage for solving a big problem over the long term," Rossotti told Law360.

While some Democrats in Congress promote new mandates for information reporting and for broader audits of corporations and wealthy taxpayers, some Republicans have argued for more modest increases in IRS funding focused on investigations, technology and customer service. The administration's request for a big across-the-board increase in IRS funding coincides with an expansion of responsibilities for the agency including delivery of economic impact payments and efforts to modernize computer systems and implement an agency restructuring plan mandated by Congress.

GOP lawmakers have pushed back against efforts by Democrats to rapidly expand the agency's current footprint of about 80,000 employees and move toward the agency's high water mark set about a decade ago — before the cuts in the 2011 Budget Control Act

— when it had $14 billion in funding and nearly 95,000 employees. Some Republicans have questioned whether an expansion of tax enforcement and new mandates for information reports or IRS audits would raise privacy concerns and complicate efforts by businesses and families to counter fallout from the coronavirus pandemic.

Sen. Jim Lankford, R-Okla., a senior appropriator and a member of the Finance Committee, said he was skeptical of Biden's request for a big increase in IRS funding and for broader enforcement authority for the agency. He said some additional funding for technology might be warranted but noted he was skeptical of the agency's requests over the years for more funding to upgrade systems.

"At some point, they've got to change their line or try to figure out what the problem is and fix their systems," Lankford told Law360.

Lankford said he leaned against mandated audit rates for big corporations and wealthy taxpayers. He said it would be similar to asking taxpayers to "prove your innocence."

Other Republicans have questioned the need for more information reporting by banks about wealthy clients' deposits, withdrawals and other transactions.

In light of GOP opposition and mixed views among Democrats, Sen. Mark Warner, D-Va., a senior member of the Finance Committee, said he doubted mandatory audit rates would attract consensus support from lawmakers. And he said a mandate for banks to file a new information reporting form with data on wealthy taxpayers' deposits, withdrawals and other transactions would have dicey prospects.

"That would be an uphill climb," Warner told Law360.