An intraparty dispute over proposals to ease the $10,000 cap on state and local tax deductions will provide a key test of Democrats' ability to advance President Joe Biden's framework of ambitious business tax hikes to finance his $2 trillion infrastructure plan. 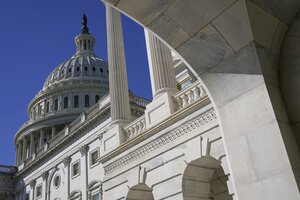 While most Republicans favor retaining the $10,000 cap on state and local tax deductions, an effort to end the cap has drawn support from some Republicans from states like California, New Jersey and New York. (AP Photo/Patrick Semansky)

Proponents are pushing to expand legislation for Biden's recovery blueprint to include language that would remove or ease the $10,000 temporary cap on deductions for state and local taxes, which expires at the end of 2025 under the 2017 Tax Cuts and Jobs Act.

Some lawmakers have said an agreement to address concerns about the SALT deduction cap may be a factor in whether they support Biden's new framework for higher business levies, including a proposed 28% corporate rate.

Several senior Democrats said efforts to pass Biden's infrastructure plan by the July 4 target date set by House Speaker Nancy Pelosi, D-Calif., could hinge in part on the ability of party leaders and the Biden administration to avoid defections by critics of the SALT deduction cap under Internal Revenue Code Section 164

The 218-member House Democratic majority can afford to lose no more than two defectors in a bid to pass Biden's business tax hikes by a simple majority of at least 216 votes, because all 212 Republicans are expected to vote no in a faceoff over partisan fiscal priorities. Five seats are currently vacant in the 435-seat House.

House Ways and Means Committee Chairman Richard Neal, D-Mass., and Senate Finance Committee Chairman Ron Wyden, D-Ore., have made it clear they are open to proposals to ease the SALT deduction cap, but they have left efforts to deal with the issue, for now, up to the Biden administration. And they have emphasized that Democrats need to show unity in order to win House passage of Biden's tax plan.

Neal said talks between the Biden administration and proponents of proposals to repeal or ease the SALT deduction cap were under way and would be part of efforts to advance Biden's recovery plan, which consists of an infrastructure plan and a package of family incentives.

The negotiations on the SALT deduction cap come as Democrats are developing new revenue-raising proposals. These include additional business levies beyond those already outlined by Biden and new enforcement measures to address an annual gap between taxes owed and paid of as much as $1 trillion, based on an estimate by Internal Revenue Service Commissioner Chuck Rettig.

"We will wait and see," Neal told Law360. "The administration apparently has had some conversations about it. I want to hear some thoughts on it."

Rep. Tom Suozzi, D-N.Y., a member of the Ways and Means Committee, has threatened to potentially hold back support for Biden's business tax framework if it omits a plan to remove the SALT deduction cap. His proposal, H.R. 613, would erase the final five years of the SALT deduction cap, which would be from 2021 to 2025. He said it had the potential to attract more support than did a similar 2020 plan in the last Congress covering six years because it would be less costly — about $350 billion over 10 years.

"At the end of the day, we must fix this injustice," Suozzi said in a written statement.

Suozzi and his allies scored a victory last year when the House passed a one-year suspension of the SALT deduction cap for 2020 as part of a coronavirus pandemic response plan. That legislation died in the Senate, despite support from several key Democrats, including Sen. Bob Menendez, D-N.J.

Now, Suozzi has worked in tandem with Menendez and other Senate allies and formed a bipartisan House caucus to emphasize the cap's negative effects on districts represented by both parties.

Rep. Darrell Issa, R-Calif., said he and other Republican foes of the SALT deduction cap were concerned that it did not properly account for the fact that taxpayers had fully paid their state and local taxes. Issa said he voted against the 2017 tax overhaul because he believed the cap was not constitutional.

Several members of Suozzi's caucus said they would point to their own districts as examples of areas hurt by the SALT deduction cap.

"From firefighters to police officers, to teachers, to nurses and small-business owners, I hear from people every day about what a crushing blow the SALT cap has delivered them," Rep. Andrew Garbarino, R-N.Y., who represents a district on Long Island, said in a written statement.

Rep. Young Kim, R-Calif., a co-chair of the bipartisan SALT caucus, has said the deduction cap would also hurt residents in her district near Los Angeles.

"Our district and the state of California could definitely benefit from the repeal of the cap on SALT," Kim told Law360.

Suozzi said he hoped a showing of bipartisan opposition to the SALT deduction cap would make it hard for his party and the Biden administration to stick with the status quo.

But House Budget Committee Chairman John Yarmuth, D-Ky., and Rep. Don Beyer, D-Va., a member of the Ways and Means Committee, said the need for revenue from Biden's business tax hikes to pay for his infrastructure plan may leave little room for big add-ons like a repeal of the SALT deduction cap.

Beyer said lawmakers might need to develop their own proposals to cover the cost of repealing the SALT deduction cap in order to work out any agreement with the White House.

Jen Psaki, the White House press secretary, said in an April 15 briefing that the administration would discuss with lawmakers their ideas for any revenue-raising offsets or deletions from Biden's plan to include a proposal to ease the SALT deductions. She said they also would discuss "what's most important to achieving our overarching objectives."

For their part, most Republicans have supported retaining the SALT deduction cap, even though some Republicans from areas in blue states such as California, New Jersey and New York with high state and local taxes have backed Suozzi's proposal to end the cap.

Rep. Kevin Brady, R-Texas, ranking member on the House Ways and Means Committee, charged the Suozzi-backed repeal proposal would deliver benefits mainly to wealthy taxpayers rather than those in the middle class.

"The bulk of it goes to just a few people in just a few states," Brady told reporters last week.

Brady has said the cap was designed to be roughly double the average claim for deductions for state and local taxes.

Rep. Vern Buchanan, a senior member of the Ways and Means Committee, predicted Republicans would continue to support the current SALT deduction cap and would oppose Biden's tax plan whether it includes changes to the cap or not.

"We keep spending money we don't have. We've got to get some taxes from somewhere," Buchanan, R-Fla., told Law360.

With little sign of any GOP support for Biden's tax plan, some Democrats are trying to lay the groundwork for a potential deal in their own party, if necessary, to ease the SALT deduction cap.

For example, Rep. Lauren Underwood, D-Ill., has promoted a plan, in H.R. 2439, to raise the cap on deductions for state and local taxes to $15,000 for single taxpayers and $30,000 for married couples. Underwood said she believed some lawmakers would line up behind her proposal to raise the SALT cap because it would address criticism that the uniform SALT deduction cap is too low and delivers fewer benefits to single individuals after they get married, resulting in a so-called marriage penalty.

"It's about making sure that hard-working families are not being double-taxed," Underwood told Law360.