'Just Do Your Job': Justice Breyer's Legacy Of Pragmatism

With the coming retirement of Justice Stephen Breyer, the U.S. Supreme Court loses not only a core member of its liberal bloc, but also a judicial thinker who cares deeply about making the law work on a practical level, those who worked with him said.

Justice Breyer isn't known for flowery majority opinions like retired Justice Anthony Kennedy, or for influential dissents, like the late Justice Ruth Bader Ginsburg. He has tended to join, rather than author, opinions handed down in landmark cases during his nearly 28 years on the Supreme Court. 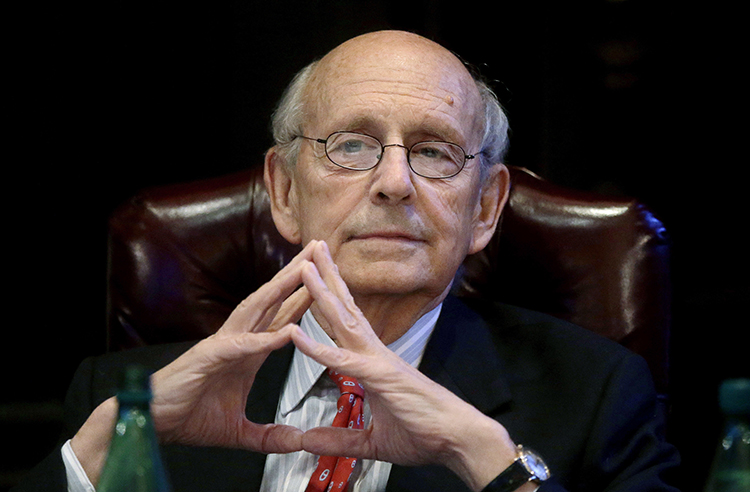 Justice Stephen Breyer listens during a forum at the French Cultural Center in Boston in 2017. (AP Photo/Steven Senne, File)

It is in the grind of the court's quotidian work where the former Harvard Law professor has made his presence felt, showing as much interest in arcane matters of antitrust or arbitration law as the blockbuster social issues that dominate newspaper headlines.

"Just do your job." That's one of the key lessons he learned long ago in his past life as a congressional lawyer, a longtime friend said.

The Supreme Court justice's role, as Justice Breyer sees it, is to work with one's peers to craft a coherent body of law for the lower courts to rely on.

"Rather than correcting errors, the Supreme Court is charged with providing a uniform rule of federal law in areas that require one," he wrote in a paper in 2006 for the Journal of Appellate Practice and Process.

Justice Breyer's votes on certain hot-button issues have fallen along predictable political lines during his career, but he has always emphasized the practical.

"I think he really wanted to know, 'How is this going to affect the people who are governed by this?'" said Kathryn Judge, a professor at Columbia Law School who clerked for Justice Breyer from 2005 to 2006, said in a past interview with Law360.

, the court struck down a Nebraska state law that banned the use of a second-trimester abortion procedure except to save a pregnant woman's life. Justice Breyer wrote the majority opinion, affirming women's constitutional right to abortion established by Roe v. Wade

The procedure at issue was a common one for second-trimester abortions, Justice Breyer argued, and banning it would effectively deprive pregnant women and girls of their constitutional right to seek abortions. It would also expose their health care providers to prosecution, he reasoned.

"All those who perform abortion procedures using that method must fear prosecution, conviction, and imprisonment," Justice Breyer wrote. "The result is an undue burden upon a woman's right to make an abortion decision."

Justice Breyer has advocated fiercely for considering the real-world consequences of various interpretations of the law, rather than considering only the language of a constitutional provision or a statute, former clerks say.

This outlook comes through in his dissents as well. In the 2011 case AT&T Mobility v. Concepcion

Justice Breyer expounded on the fragmenting effect of subjecting consumers to class action waivers. Requiring plaintiffs to give up class actions and instead pursue claims through individual arbitration would prevent them from seeking recourse at all, he said.

"What rational lawyer would have signed on to represent the Concepcions in litigation for the possibility of fees stemming from a $30.22 claim?" he wrote, referring to Vincent and Liza Concepcion, the plaintiffs in the underlying false advertising suit against AT&T.

Justice Breyer's dissent in Concepcion was "a perfect example of his effort to say, 'We need to understand the actual effects of the decision we're rendering,'" said Judge.

It was this keen attention to the realities of litigation that led him to question the constitutionality of the death penalty. In case after case, Justice Breyer has highlighted the disparate implementation of executions across the country in an effort to get his colleagues to reconsider the issue.

. "For the reasons I have set forth in this opinion, I believe it highly likely that the death penalty violates the Eighth Amendment."

Justice Breyer's varied career in government and academia helped ground his results-oriented approach. He learned to build coalitions in his roles at the U.S. Department of Justice in the mid- to late 1960s, as assistant special prosecutor on the Watergate special prosecution force in 1973, and then as chief counsel of the U.S. Senate Judiciary Committee soon after.

"Justice Breyer was the most effective chief counsel in the history of the Senate. He got along with everyone," said Kenneth R. Feinberg, a longtime friend of the justice who worked alongside him on Capitol Hill as chief of staff to Sen. Ted Kennedy, D-Mass., then chairman of the judiciary committee. During that time, the committee tackled the deregulation of the airline industry and reforms to the federal criminal code.

Feinberg said Justice Breyer learned three important lessons from Kennedy during his time as the committee's top lawyer in the late 1970s that he brought to his work on the Supreme Court. "First, he learned from Sen. Kennedy that you play with the cards that you have been dealt ... that was a mantra of Sen. Kennedy's. Two: Do your job. Don't worry about the criticism or the pressures. Just do your job. And third, and perhaps most important for Stephen Breyer: The perfect is the enemy of the good."

Justice Breyer held various academic posts at Harvard Law School from 1967 to 1994, and during this period, also spent some 13 years sitting on the U.S. Court of Appeals for the First Circuit in Boston. In the mid-1980s, he was also on the newly created U.S. Sentencing Commission.

At the time he reached the Supreme Court in 1994 after being nominated by President Bill Clinton, Justice Breyer cut a wiry, professorial figure, whom his clerks remember as driven and energetic.

Today, he does not shirk from holding forth during the court's oral arguments. Where other justices used short, specific questions to expose the weakness of an advocate's position, he would explain his thinking at length before asking counsel: "Why am I wrong?"

Justice Breyer delights in using eccentric hypotheticals to otherwise dry legal questions, many betraying his love of the arts and French culture. He learned to speak French by reading the novels of Marcel Proust while a legal intern in Paris, and was recently admitted as the only American member to France's Academy of Moral and Political Sciences.

"The mad art burglar has just stolen The Thinker, Rodin's Thinker from the local museum," Justice Breyer began one hypothetical question in a Fourth Amendment case, alluding to the masterpiece of French sculptor Auguste Rodin.

Though they may have grated on his colleagues, Justice Breyer's zany hypotheticals served a purpose, he has insisted.

"The point is to try to focus on a matter that is worrying me," he said in one interview. "Sometimes it's easier to do that with an example."

In a June 2017 interview with Law360, Justice Breyer spoke candidly of lively debates with his originalist colleague, the late Antonin Scalia. Although they did sometimes wind up seeing each other's point of view, they frequently ran up against that impasse in how they viewed the law, he said.

"He was afraid that the way I decide cases is too subjective. I don't think it is, but he does," Justice Breyer said of Justice Scalia at the time. "I feared the way he was deciding it was too rigid. He doesn't think it is."

In that interview, Justice Breyer stressed the importance of rule of law to functioning democracies and the role he believed that public opinion still plays in upholding the courts.

"That doesn't mean your decisions have to be popular," he told Law360 at the time. "To the contrary, you only have a rule of law if courts are willing to protect people who are very unpopular."