As President Joe Biden prepares to pitch his recovery plan to a joint session of Congress on Wednesday night, Democrats face tough choices on whether to move an ambitious tax agenda in a comprehensive filibuster-proof reconciliation bill or two smaller measures. 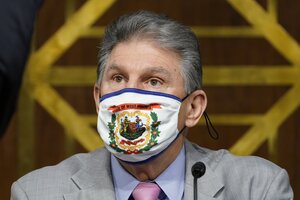 Passage of any reconciliation bill in the closely divided House and the 50-50 Senate is sure to need support from centrist Democrats like Sen. Joe Manchin of West Virginia. (AP Photo/Susan Walsh)

Several senior Democrats said lawmakers were developing a legislative strategy for moving tax proposals from Biden's recovery plan in either a big reconciliation bill shielded from Senate filibusters or two smaller measures, one for fiscal 2021 and one for fiscal 2022. They said the passage of any reconciliation bill by simple majority vote in the closely divided House and 50-50 Senate would require support from undecided centrist Democrats.

Negotiations to rally support for reconciliation bills could focus in part on resolving intraparty disputes over key items such as Biden's proposal for a 28% corporate tax rate, which some Democrats have opposed.

Some centrists including Sen. Joe Manchin, D-W.Va., have argued for keeping the focus on a regular-order five-year surface transportation reauthorization, which is intended to resolve differences between the transportation-related portion of Biden's $2.3 trillion infrastructure plan and a $568 billion GOP counterproposal. And some Democrats have given mixed signals about whether they would support the use of expedited reconciliation bills containing business tax hikes and other items, including business incentives, to counter the effects of the coronavirus pandemic.

For example, Manchin said on CNN's "State of the Union" on Sunday that any reconciliation bills should be focused on budget-related issues, and any tax hikes should be negotiated.

"I'm supporting anything that makes common sense and is reasonable," Manchin said.

Neal said the timing of any reconciliation bills would hinge in part on whether Democrats can win House passage of a regular-order five-year highway bill before the July 4 target date set by Speaker Nancy Pelosi, D-Calif. He urged Biden to promote a bipartisan deal on an infrastructure tax package and make the case for other tax priorities in his speech to Congress.

"He should talk about the framework. And I think he ought to say bipartisanship is at the top of the agenda," Neal told Law360.

Wyden said party leaders were exploring pathways for one or two reconciliation bills. He has said a recent ruling by the Senate parliamentarian, Elizabeth MacDonough, would allow Democrats to revise the fiscal 2021 budget resolution used for the American Rescue Plan Act

to frame another reconciliation bill. Such an approach would give Democrats more flexibility to split Biden's recovery plan in two, with one part targeted for completion by Sept. 30, and the other set up for completion later in the year or in early 2022.

Unlike the case with the House-passed Moving Forward Act, which died in the Senate last year, both chairmen have opened the door to early bicameral talks on an infrastructure tax package aimed at speeding up completion of the highway bill and clearing the way for the development of a reconciliation bill.

"I'm going to have to work very carefully with the Senate on this one to make sure that we have our plans lined up," Neal said.

With or without the completion of a regular-order highway bill, some liberals have said there are strong arguments for putting Biden's infrastructure plan and family incentives from his recovery blueprint into one big reconciliation bill. For example, Sen. Bernie Sanders, I-Vt., the Senate Budget Committee chairman, said a single reconciliation bill might be easier to promote and to complete.

"You could do one quicker. It would get acted on in the near future," Sanders told Law360.

But the House Appropriations Committee chair, Rep. Rosa DeLauro, D-Conn., said Democrats might opt to divide Biden's recovery plan into two reconciliation measures, which would be vehicles for tax proposals.

"There could be two smaller bills, depending on what happens: One is for infrastructure, and the other is, if you will, for the care economy," DeLauro told Law360.

She said the second reconciliation bill could be focused on incentives and support for families, including her plan to make permanent the one-year expansion of the child tax credit in the American Rescue Plan Act.

On the other side, several senior Republicans said the GOP remained open to negotiations on a regular-order highway bill, but said they would push back against any reconciliation bills to advance Biden's tax agenda.

Senate Minority Whip John Thune, R-S.D., a senior member of the Finance Committee, said it probably would be a less challenging job to rally opposition to tax proposals in a big reconciliation bill than in two smaller ones.

"If it's a big one with all their big government programs and proposals in it, it would be easier. If they try to split it up and pass things that we are for, it might be a little more complicated," Thune told Law360.

Some Republicans have taken a pragmatic approach in trying to advance bipartisan tax measures, if necessary, as amendments to reconciliation bills opposed by the GOP.

For example, Rep. Ron Estes, R-Kan., a member of the Ways and Means Committee, said he would regard any reconciliation bill as a potential vehicle for a bipartisan plan to make permanent full, immediate deductions, or expensing, for research and development costs. These full deductions are set to expire the end of the year, and would be replaced in January by a mandatory five-year amortization schedule under the 2017 Tax Cuts and Jobs Act.

"The real push is to get R&D expensing in, just because it helps with jobs and keeps moving things forward. It would be better to get that in the first bill, so you would start getting the benefit," Estes told Law360.

Sen. Rick Scott, R-Fla., chairman of the National Republican Senatorial Committee, said that in addition to promoting bipartisan tax proposals, he and other Republicans would criticize Democrats for bending rules if they try to amend the fiscal 2021 budget resolution to frame another reconciliation bill. And he said he also would focus on the impact of any reconciliation bills on the nation's $28 trillion federal debt.

"I'm going to make sure everybody knows how bad it is," Scott told Law360.

"The bottom line is if you can get something done that really makes a difference for people," Tester told Law360.

Sen. Ben Cardin, D-Md., a senior member of the Finance Committee, said development of a regular-order surface transportation reauthorization represented a key first step to set the stage for talks among Democrats on the development of certain tax priorities in one or two reconciliation bills.

"The preference is to do as much as we can coming out of committee under regular order. The use of reconciliation is a fallback," Cardin told Law360. "I don't think there's a limit on the number of bills, so you could use two reconciliation bills."