While recently issued guidance provided clarity on the employee retention credit for 2020 and statutory changes made for 2021, several questions remain unanswered, such as eligibility for S corporation owners and whether forgiven Paycheck Protection Program loans count toward qualification. 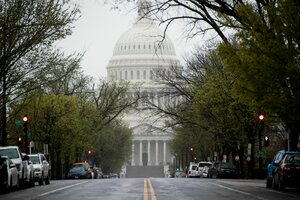 While recipients of Paycheck Protection Program loans were originally ineligible for the employee retention credit, Congress amended the CARES Act to strike that provision. (Photo by Saul Loeb/AFP via Getty Images)

provided a refundable 50% payroll tax credit for up to $10,000 in wages for employers that had businesses partly or completely shut down or faced a significant decline in gross receipts between March 12, 2020, and Jan. 1, 2021.

While recipients of Paycheck Protection Program loans were originally ineligible for the credit, the Taxpayer Certainty and Disaster Tax Relief Act of 2020

amended the CARES Act to strike that provision. Then the Internal Revenue Service issued guidance

in early March that clarified those retroactive changes to the credit for tax year 2020.

, which extended the employee retention credit for wages paid from July 1 through Dec. 31 and allowed certain recovery startup businesses to take the credit, among other changes. At the end of March, the government provided additional guidance

on how the credit applies to the first and second quarters of 2021.

As the April 30 deadline approaches, Law360 examines three unanswered questions that remain in the wake of all the statutory changes and two guidance packages.

It is unclear whether wages paid to S corporation employees who are also owners can qualify for the employee retention credit, according to Amie Kuntz, a certified public accountant and manager at RubinBrown LLP.

A set of FAQs last updated by the IRS in April said qualified wages are those that are paid to an eligible employee. Another question said wages paid to someone who owns more than 50% of a company, or who owns more than half of a company along with related individuals including parents, children, grandparents, siblings and other family members, cannot be used to calculate the credit.

"We know related parties don't [qualify for the employee retention credit], that was clear in the FAQ and the guidance we had and the law, but what was debated was whether the owner wages, in a roundabout indirect ownership way, are they disqualified?" Kuntz said. "That wasn't addressed."

This question needs to be answered by the IRS because there could payroll tax penalties or even criminal consequences for violations, she said.

of the Internal Revenue Code anyone required to collect, account for or pay any payroll tax and willfully doesn't meet their obligations can be found guilty of a felony, fined up to $10,000 and imprisoned for up to five years.

It's unlikely that someone is acting fraudulently if they reasonably try to apply the rules, but no business wants to be on the hook for delinquent payroll taxes, Kuntz said. As of now, the IRS has not said whether it would provide relief for businesses that claim the credit for wages paid to a shareholder, Kuntz said.

Adam Markowitz, enrolled agent and vice president of Howard L. Markowitz PA CPA, said another unanswered question is whether the owner of an S corporation is considered related to his business or not. Under Section 51(i)

, ownership can be determined through the constructive ownership rules of Section 267(c)

, which accounts for stock ownership by siblings, spouses, ancestors and lineal descendants.

One of the IRS FAQs "clearly stated that relatives of shareholders or owners who own more than 50% of their companies are not eligible for the employee retention credit," Markowitz said. "It would be tremendously beneficial if the IRS came out and clarified in the form of actual authoritative guidance whether this does or doesn't include the owners themselves."

allowed PPP loan recipients to also qualify for the employee retention credit, but practitioners have been left wondering whether forgiven PPP loan amounts are counted toward the gross receipts test in 2021, which can make or break whether a company's paid wages qualify for the credit.

The first IRS notice said wages that were paid for and forgiven by the PPP cannot also be counted toward the employee retention credit. But neither notice explained whether PPP loan amounts that are forgiven count toward meeting the gross receipts test, Kuntz said. It's possible to justify including forgiven PPP loan amounts in income for purposes of the gross receipts test but arguments can also be made the other way, she said.

Kristin Esposito, the director of tax policy and advocacy at the American Institute of Certified Public Accountants, said the AICPA hopes the IRS excludes forgiven PPP loan amounts from being included in gross income because otherwise more companies would miss out on the credit.

When the CARES Act created the credit, not many businesses claimed it since they had to decide between the employee retention credit and the PPP loan and often chose the loans, Esposito said. The reason Congress expanded and enhanced the credit through the Consolidated Appropriations Act and ARPA was to help more employers qualify, she said.

"We want them to exclude the PPP loan forgiveness from the gross receipts test so that more folks can qualify for the ERC," she said. "But they need to make that decision and hopefully do it quickly."

So far, IRS guidance has also been ambiguous about how the employee retention credit can be used concurrently with other credits, such as the tip credit, which allows an employer to offset amounts paid toward employees' Medicare and Federal Insurance Contributions Act withholdings on income that is derived from tips.

Even though the food and beverage industry has been significantly affected by the coronavirus, it's unclear whether an employer such as a restaurant can claim both tax credits at the same time, Markowitz said.

"You think logically if I leave a $100 tip on the restaurant bill, why should the employer get $50 of wages for an ERC [when] they actually didn't pay any" of those wages, he said. "But the qualifier is we just don't know."

can be used with other deductions or credits, and separately whether the CARES Act, Consolidated Appropriations Act or American Rescue Plan Act prohibit claiming both, Kuntz said.

It seems that Section 45B can likely be claimed along with the employee retention credit since the statute itself does not prohibit other credits from being used with it, Kuntz said. However, the analysis of concurrent use becomes more complicated when looking at the CARES Act and its amendments under the Consolidated Appropriations Act, she said.

"That's our interpretation [but] that could still be gray," she said. "Maybe they didn't mean to do that."

The IRS did not immediately respond to questions from Law360.