Congressional Democrats examining tweaks to President Joe Biden's plan to raise capital gains tax rates face a delicate balancing act on where to set the rates and what income will qualify for preferential treatment as they court ambivalent lawmakers. 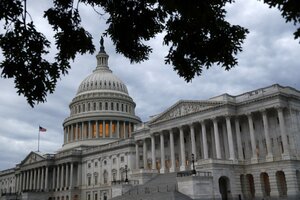 Democrats have promoted a capital gains tax increase to cover the cost of extending a temporary expanded child tax credit and other family incentives. Republicans have argued such levies would undermine recovery from the coronavirus pandemic. (AP Photo/Patrick Semansky)

Several senior Democrats said Biden's plan to tax the investment profits of those earning at least $1 million at the proposed top individual rate of 39.6% — up from the current top capital gains rate of 20% — would trigger a sweeping review of the current tax framework for all investors. They said talks would be needed to resolve the concerns of some lawmakers about the potential impact of increased capital gains taxes on business investment.

While Democrats have promoted a capital gains tax hike to cover the cost of extending a temporary expanded child tax credit and other family incentives, Republicans have argued such levies would undermine investment as businesses try to rebound from the economic effects of the coronavirus pandemic.

House Ways and Means Chairman Richard Neal, D-Mass., and Senate Finance Committee Chairman Ron Wyden, D-Ore., said they were discussing Biden's capital gains tax plan with members of their panels and had not settled on a timeline for action.

Democrats have explored the use of a regular-order five-year surface transportation bill and a filibuster-proof reconciliation bill to advance Biden's recovery agenda, including an infrastructure plan and family incentives. They have also looked for ways to move a committee-approved retirement savings package and to follow up on relief items enacted in the American Rescue Plan Act.

Neal said the taxation of capital gains would be part of a broader discussion of taxes for businesses and investors that includes Biden's proposals to raise the corporate rate to 28% from 21% and the top individual rate to 39.6% from 37%.

"It's much more complicated than voluntary rates. That's what we want to explore," Neal told Law360. "There are other considerations, such as how long an asset is held."

In the Senate, Wyden has expressed concern that wealthy investors pay taxes "when they feel like it" based on when asset sales trigger capital gains taxes, while workers must pay higher tax rates on wages.

Wyden has been working on legislation based on the plan he outlined in 2019 for taxing wealthy investors' capital gains as ordinary income based on a mark-to-market accounting of easily traded investments, such as stocks and bonds.

For their part, Republicans have attacked capital gains tax hikes as a potential deterrent to business investment. They have warned against moving to a combined tax rate of 43.4% on capital gains: Biden's proposed top individual rate of 39.6% plus a 3.8% net investment income tax under the 2010 Health Care and Education Reconciliation Act

for those with modified adjusted gross income of more than $200,000 for individuals or $250,000 for married couples.

Rep. Kevin Brady, R-Texas, ranking member on the Ways and Means Committee, said the capital gains tax hike and other rate increases in Biden's plan would prod investors to shop for investments in foreign countries with lower tax rates.

"At the end of the day, that will drive investment out of the U.S., and lower investment overall," Brady told reporters.

Brady and other Republicans have defended the current capital gains tax framework, which was left in place by the 2017 Tax Cuts and Jobs Act.

During the 2020 campaign, former President Donald Trump explored ways to reduce capital gains taxes, including the use of executive action to allow an inflation adjustment in an investment's base value. Since the November elections, some Republicans have continued to express interest in streamlining capital gains taxes while pushing back against higher levies.

Several GOP lawmakers said increases in the capital gains rate would be viewed by some constituents as putting a damper on economic recovery and the growth of investments in retirement accounts.

Sen. Bill Cassidy, R-La., a Finance Committee member, said that in the run-up to the 2022 midterm elections he and other Republicans would emphasize the potential negative impact of Biden's proposed tax increases on the availability of capital to expand businesses and create jobs.

"Working capital and investment is going to be affected by this. And that's going to affect job growth," Cassidy told Law360.

The Tax Foundation, a conservative think tank, has estimated that Biden's capital gains tax hike would lose $124 billion in federal revenue over 10 years, citing the possibility that wealthy investors would put off selling assets to avoid paying capital gains taxes. Other analysts, including the Congressional Research Service, have said any revenue lost would be offset by revenue gained from Biden's plan to tax a wealthy investor's capital gains at death when gains exceed $1 million for an individual or $2.5 million for a married couple.

Biden's plan would end the allowance for heirs to claim an estate's assets with a step-up in basis and without triggering capital gains taxes, with exceptions for family-owned farms and businesses.

"I would hope there would be at least one Democrat who would say, 'We can't do this kind of damage to the economy,'" Toomey told Law360.

In response to GOP opposition, Biden has argued that there is a two-tiered system that taxes the wages of working families at a higher rate than the investment income of wealthy families.

"Working families pay taxes they owe on the wages they earn, while some of the wealthiest Americans avoid paying anything close to that fair share," Biden said at Tidewater Community College in Norfolk, Virginia, on May 3. He has argued for changes to ensure fairness in the tax code, including incentives for working families, and new levies and tougher enforcement for wealthy taxpayers.

In addition to arguments about tax equity, Sen. Ben Cardin, D-Md., said the administration and party leaders might need to make changes in Biden's capital gains tax proposal in order to rally support from undecided Democrats.

While some concessions may be needed in intraparty talks, Sen. Sheldon Whitehouse, D-R.I., a member of the Finance Committee, said he believed many Democrats eventually would get behind a plan to raise capital gains taxes on wealthy taxpayers, in part because it probably would be popular with voters.