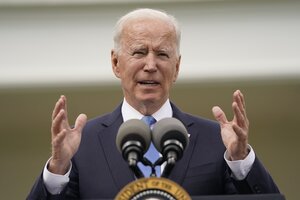 The increased amounts are phased out for incomes over $150,000 for married taxpayers filing jointly and qualifying widows or widowers, $112,500 for heads of household, and $75,000 for all other taxpayers, the IRS said.

"For working families with children, this tax cut sends a clear message: Help is here," Biden said in a statement.

Eligible families will not need to take any action in order to receive the refundable tax credit payments on the 15th of each month in amounts of up to $300 per month for each child under age 6 and up to $250 per month for each child age 6 and above, the U.S. Department of the Treasury and the Internal Revenue Service said in a statement. Payments will be made through direct deposit, paper checks or debit cards, but they won't be delivered on weekends or holidays, the statement said.

Total advance payments will total up to 50% of the child tax credit, and eligibility will be based on information included in 2020 tax returns, or 2019 returns if 2020 returns haven't been filed yet, the IRS said.

Republican lawmakers didn't vote for the ARPA and were not supportive of Biden's child tax credit announcement.

Rep. Jodey Arrington, a member of the House Ways and Means Committee, told Law360 that the GOP expansion of the tax credit in the 2017 GOP tax overhaul supported families and gave them an incentive to work.

"The Democrats' expansion gives cash payments to individuals regardless of whether they are working or even looking for work," Arrington, R-Texas, said in a statement. "Policies should strengthen working families and encourage self-reliance, not trap them in government dependence."

Since the expanded child and earned income tax credits expire at the end of this year, Biden called on Congress to pass the American Families Plan and make the tax relief permanent. During his joint address to Congress last month, Biden unveiled his plan that would impose higher taxes on those making more than $400,000 per year in order to offset $800 billion in expanded family tax and medical benefits, free community college tuition and paid leave for workers.

The plan would raise the top tax rate to 39.6% on wealthy taxpayers, from 37% in current law. It would also end the step-up in basis — on capital gains over $1 million, or $2.5 million for a couple — that allows those inheriting wealth to avoid taxes. In addition, the plan would close the so-called carried interest loophole by equalizing tax rates on wages and capital gains.

In late March, the House Ways and Means Committee chairman, Rep. Richard Neal, D-Mass., introduced legislation to extend permanently ARPA's changes to the child tax credit as well as changes to the earned income tax credit, which include increasing the maximum credit amount for childless workers from around $540 to roughly $1,500.

Update: This story was updated to reflect a comment from a Republican lawmaker.