President Joe Biden's bipartisan deal to provide the IRS with $40 billion in mandatory funding over the next 10 years sets the stage for a new round of wrangling over the scope and timing of upgrades to the agency's operations. 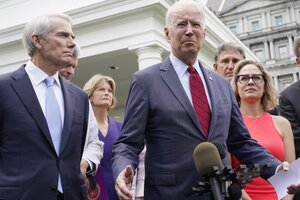 President Joe Biden speaks alongside senators about the $1.2 trillion infrastructure deal on Thursday. The deal would provide the IRS with $40 billion in mandatory funding over 10 years. (AP Photo/Jacquelyn Martin)

The $1.2 trillion infrastructure deal cut by Biden with a bipartisan group of senators would provide the Internal Revenue Service with $40 billion in mandatory funding over 10 years, or an average of $4 billion annually, roughly equal to a third of the agency's current budget. The mandatory funding would be in addition to Biden's request for a 10.4% increase in fiscal 2022 discretionary funding for the IRS to $13.2 billion and would support a drive to reduce a $1 trillion annual gap between taxes owed and paid, as estimated by IRS Commissioner Chuck Rettig.

But final action on the 10-year IRS mandatory funding plan could be complicated by congressional Democrats' efforts to link the underlying infrastructure deal to a fiscal 2022 reconciliation bill for other items in Biden's economic recovery blueprint. Biden said Thursday that both bills must be done "in tandem." He then issued a statement Saturday to clarify that his comments did not represent a veto threat against the infrastructure deal, if passed. The president said he would stand behind the deal "without reservation or hesitation."

Despite Biden's reversal, several senior lawmakers in both parties said the fate of the long-term mandatory IRS funding plan could hinge on talks aimed at dividing or restricting the use of the IRS funds. It could also be linked to fights over tax hikes and other potential delays in the completion of a filibuster-proof reconciliation bill.

The administration has emphasized that mandatory funding would support expanded tax compliance and policing, with the goal of reducing the tax gap and collecting $140 billion in additional revenue over 10 years. But some lawmakers and stakeholder groups have argued the funding should be used for other priorities along with enforcement, including investments in technology and taxpayer service.

Senate Finance Committee Chairman Ron Wyden, D-Ore., and House Ways and Means Committee Chairman Richard Neal, D-Mass., voiced support for increased IRS funding, but they also stressed that they would be pushing for family incentives and other parts of Biden's recovery agenda in a reconciliation bill.

Neal said he supported the legislative strategy outlined by Speaker Nancy Pelosi, D-Calif., last week for putting off any potential House action on the bipartisan infrastructure deal unless the Senate passes a reconciliation bill filled with Democratic priorities.

"This is part of what I believe is going to be a long process," Neal told reporters Thursday.

For now, Democrats have signaled their desire to put the bipartisan infrastructure deal and mandatory IRS funding on hold and to focus on advancing a fiscal 2022 budget resolution before the August recess. The budget plan would provide instructions for a reconciliation bill. For now, both the reconciliation bill and the infrastructure deal appear on separate tracks but on a similar timetable, with completion expected by fall.

Wyden called for linking the completion of the infrastructure deal and the reconciliation bill.

"The two of them have got to be directly connected," Wyden told reporters last week.

Wyden said the reconciliation bill should incorporate several priorities, including parts of a committee-approved clean energy tax plan and tax hikes aimed at wealthy taxpayers. He has backed proposals in Biden's recovery plan for raising taxes on corporations and wealthy families.

On the other side, the GOP has pushed back against Biden's plans to increase levies on corporations and the wealthy. Some Republicans, though, said they would be willing to discuss proposals to give more funding to the IRS in order to raise revenue by shrinking the tax gap.

Several senior Republicans said the IRS mandatory funding plan would be vetted by their caucus and that the plan's completion could depend in part on whether there is an agreement on how the money should be used by the agency. They also said that Republicans were concerned about potential efforts by Democrats to link passage of the bipartisan infrastructure deal to potential tax hikes on corporations and wealthy taxpayers in a reconciliation bill, which Republicans have vowed to oppose.

in the infrastructure deal, but put no conditions on items to be included in or omitted from the reconciliation bill during the talks with Biden.

"All the 2017 tax issues are out of this deal. That doesn't mean they would be out of the reconciliation package," Blunt told Law360. He said the IRS mandatory funding plan may get a cool response from other Republicans.

"We'll see how much of a problem that is for people on our side," Blunt said.

While GOP negotiators extracted no commitments from Biden concerning the reconciliation bill, Blunt said they expected such legislation would not contain any infrastructure-related items left out of the bipartisan deal.

"Except for that, I don't think there's any restrictions," Blunt said.

In order to solidify support for the IRS mandatory funding plan, Sen. Rob Portman, R-Ohio, one of the negotiators of the deal and a member of the Finance Committee, said he and other Republicans were exploring potential restrictions to ensure the package does not lead to unfair IRS treatment of taxpayers.

"The guardrails will be ensuring that the IRS uses it properly. What we don't want is an over-intrusive IRS getting into small businesses and causing inappropriate burdens on our economy," Portman told Law360.

Portman said the funding was intended to raise revenue by reducing the tax gap but could be used for a range of IRS operations, including enforcement and taxpayer service.

Some lawmakers have expressed concern that tougher IRS enforcement could hurt the ability of small businesses to deal with economic effects of the coronavirus pandemic and undermine relief measures enacted in the American Rescue Plan Act.

"It has to be balanced. There has to be funding for service, for compliance and information technology infrastructure," Karl told Law360.

As lawmakers continue to vet the IRS mandatory funding plan, Sen. Jim Lankford, R-Okla., a member of the Finance Committee, said he wanted to explore whether the IRS should do more to protect taxpayer data. He said the unauthorized disclosure of tax data for thousands of the nation's wealthiest individuals to ProPublica, a nonprofit news organization, could undercut the agency's request for more resources and for more access to data to address the tax gap.

For example, Lankford said he would strongly oppose Biden's proposal to require banks to file tax information returns with data on outflows and inflows in customer accounts.

"They are talking about getting more information. And it's clear they can't handle the privacy of what they've got right now," Lankford told Law360.

The administration also has sought to mandate broader tax information reporting by cryptocurrency brokers and exchanges.

Despite concerns voiced by some Republicans about the agency's push for more resources and access to data, several senior lawmakers in both parties said they believed there would be good prospects for the survival of the bipartisan infrastructure deal and mandatory funding for the IRS.

Sen. Chris Coons, D-Del, a Biden ally, said the 10-year IRS mandatory funding plan would help to make up for years of lean budgets after deep cuts under the 2011 Budget Control Act.

He said lawmakers in both parties agreed IRS mandatory funding would help to reduce the tax gap and would be an acceptable way to help cover the cost of infrastructure.

"Investing in enforcement is widely recognized as something that could bring in revenue," Coons told Law360.