Justice Stephen Breyer is retiring from the U.S. Supreme Court at a time when his conservative colleagues on the bench seem intent on dismantling landmark precedents on abortion, affirmative action and the administrative state, to name a few. Can his successor preserve his liberal legacy? 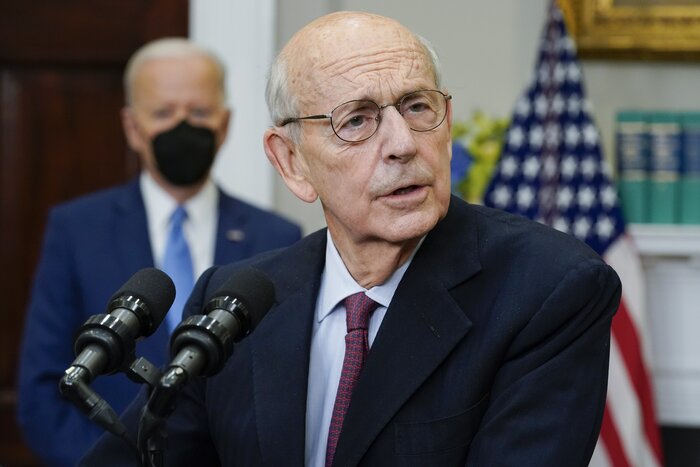 A former congressional staffer, Justice Breyer is known as a pragmatic thinker who considers the real-world consequences of his judicial decisions. That goes for his life decisions as well.

"Breyer is 83 years old," said Erwin Chemerinsky, dean of the University of California, Berkeley School of Law. "Breyer knows that there is a Democratic president and a Democratic Senate, but maybe only until January of 2023. And I'm sure he's aware that if he wants someone with his views and his values to take his place, now is the time to retire."

But perhaps most importantly, Justice Breyer saw what happened after the late Justice Ruth Bader Ginsburg refused to retire during former President Barack Obama's tenure: The liberal women's rights lawyer was ultimately replaced by conservative Justice Amy Coney Barrett, giving rise to a bold new 6-3 conservative supermajority on the Supreme Court that is currently reconsidering some of the biggest liberal precedents of the court's modern history.

Remaining on the court could make it even more difficult to preserve liberal precedents by increasing the chances that he'll be replaced later by a Republican president.

"He can count to five just like all of us can, and he's aware that had Ginsburg been replaced by a liberal, there's less chance that some of these precedents would be overruled," Chemerinsky said.

Among those precedents currently in danger is Roe v. Wade

, the 1973 decision establishing a constitutional right to obtain an abortion. The court is now deliberating over Mississippi's request to overturn Roe and uphold its law banning abortion after 15 weeks of pregnancy. At oral arguments in December, the conservatives appeared sympathetic to the state's arguments. A decision in the case is not expected until the end of the term in late June or early July, when Justice Breyer is planning to retire.

Justice Breyer has alluded to this coming shift from the Supreme Court's liberal precedents in his writing. In the 2019 case Franchise Tax Board v. Hyatt

, he dissented as the conservative majority overruled a precedent on sovereign immunity and stressed the importance of stare decisis, or adherence to precedent, for the rule of law.

"I understand that judges, including justices of this court, may decide cases wrongly. I also understand that later-appointed judges may come to believe that earlier appointed judges made just such an error," he wrote. "But the law can retain the necessary stability only if this court resists that temptation, overruling prior precedent only when the circumstances demand it."

"Today's decision can only cause one to wonder which cases the court will overrule next," Justice Breyer said.

As a scholar of administrative law, Justice Breyer has also expressed concern with his conservative colleagues' decisions curbing the power of regulatory agencies.

One of the primary targets of several conservative justices has been legal doctrines that require courts to defer to agencies' interpretations of law, which they think gives agencies an unfair advantage in lawsuits over broad regulatory initiatives. Judges, not agencies, should have the final say on what the law is, conservatives such as Justice Neil Gorsuch say.

At a court hearing in 2019, Justice Breyer said getting rid of deference doctrines would be "the greatest judicial power grab since Marbury v. Madison

, which I would say was correctly decided."

That would give judges the ability to question thousands, maybe millions, of interpretive rules on all matter of subjects, including highly technical ones involving "active moieties," he said, joking: "Do you know how much I know about that?"

Justice Breyer's defense of government experts was a key component of his dissent earlier this month to the court's decision blocking the Biden administration's vaccine-or-testing mandate for large employers.

The conservative majority's decision to block the rule "stymies the federal government's ability to counter the unparalleled threat that COVID–19 poses to our nation's workers," Justice Breyer said. "Acting outside of its competence and without legal basis, the court displaces the judgments of the government officials given the responsibility to respond to workplace health emergencies."

GOP states and industry groups say the EPA overstepped its authority under the Clean Air Act. The case could provide Justice Gorsuch and other conservative justices a vehicle to revive the so-called nondelegation doctrine, which prohibits Congress from delegating legislative functions to executive agencies without a guiding principle. The consequences of a ruling strengthening the nondelegation doctrine could mean that "most of government is unconstitutional — dependent as Congress is on the need to give discretion to executive officials to implement its programs," Justice Elena Kagan warned in a past decision.

But although he may succeed in averting another catastrophe for Democrats such as the appointment of Justice Barrett, Justice Breyer's retirement is unlikely to disturb the balance of the court in any significant way.

"No one occupying that seat is going to persuade Thomas, Alito, Gorsuch, Kavanaugh, Barrett not to be very conservative," Chemerinsky said. "So I don't think, whether it's Breyer or somebody even more liberal, that is going to change those outcomes."

That means the best progressives can hope for with this nomination is a preservation of the status quo, at least for now.

"But of course," Chemerinsky said, "this seat will be in the hands of whoever is nominated for likely decades to come. And so I think it's important that we not focus on, 'What does this person mean for the court's ideological balance this year?' but, 'What might this person mean in 2040 or 2050?'"