Federal coronavirus relief legislation would help cash-strapped businesses reduce their tax bills by claiming losses in prior years, but there's a tradeoff: Taking advantage of this measure means that companies' global intangible low-taxed income may not get its usual deduction. 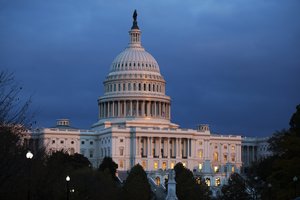 The $2 trillion coronavirus relief bill that the House of Representatives is set to vote on Friday could force companies into a difficult choice on the deduction from their liability for global intangible low-taxed income. (AP)

The U.S. House of Representatives is set to vote Friday on $2 trillion legislation meant to help millions of American workers and businesses weather the global pandemic of the virus, which causes the respiratory disease COVID-19. The bill contains a provision that would let companies carry back losses from 2018, 2019 and 2020 for up to five years preceding each of those years — but doing so could lose them the 50% deduction from their GILTI liability.

U.S. multinationals' deduction could be reduced to the extent that their overall income is less than their earnings under the GILTI measure. Accordingly, companies are wrestling with whether the decision to carry back losses is worth the taxing of GILTI at a higher rate, in addition to the risk of double taxation for prior years, according to Michael DiFronzo, PwC's international tax services leader.

Companies are asking, "is it worth the trade, and what's the cost?" he said.

that prevented companies from carrying back net operating losses, or NOLs, to prior tax years. A new ability to carry back these losses would allow companies to amend earlier returns, thus providing "critical cash flow and liquidity during the COVID-19 emergency," according to the Senate Finance Committee's summary of the bill.

The catch concerns GILTI's mechanics, which would apply to losses carried back to 2018 and 2019. Enacted as part of the TCJA, GILTI was meant to target income earned from intangible assets, such as patents or other intellectual property, in jurisdictions with low tax rates. Earnings under GILTI are immediately pulled into the U.S. for taxation and receive a 50% deduction under Internal Revenue Code Section 250

Under the coronavirus relief legislation, companies that maximize their carrybacks could reduce their taxable income for prior years and get a full refund, according to Jose Murillo, leader of the international tax services practice at EY. The tradeoff is that limitations on the Section 250 deduction kick in when the sum of GILTI exceeds taxable income, he said. The 37.5% deduction for foreign-derived intangible income under Section 250 would also be reduced in the same way.

Murillo noted that lawmakers wrote Section 250 as part of the TCJA's change to disallow carrybacks.

"The effect of the interaction with the carryback wasn't contemplated in [the TCJA], and that's what we're dealing with now," he said.

The carryback in the coronavirus relief legislation is elective, and businesses should model the interactions of these rules, Murillo said.

"I think most companies will still elect to carry back, but the actual refund they are thinking they are going to get is likely to be lower because of the way the rules interact," he said.

Depending on how much GILTI a company has relative to its other income and losses, it could be worthwhile to use the carryback and get a big refund from an amended return, according to McDermott Will & Emery LLP partner David Noren.

"At the furthest end of the spectrum, a purely domestic company would love that refund and would not care about GILTI," he said. "Others may be all over the spectrum in terms of net benefit."

The potential loss of a full Section 250 deduction isn't the only consequence that multinational corporations could face if they choose to carry back their NOLs. Doing so could also cause a company to lose foreign tax credits and thus risk double taxation.

This situation could occur if a company elected accelerated depreciation on its 2019 return to maximize its deductions, which might generate a loss that could be carried back into previous years. If the company carried this loss back to 2016, for example, it could reduce its U.S. taxable income for that year with an amended return, according to PwC's DiFronzo.

"The credits can carry forward for use but have an expiration," DiFronzo said. "If you go back five years with losses, you leave with five years on that clock closer to expiration."

Regardless of whether companies opt to carry back losses to previous years, they have to contend with coronavirus-related financial losses for this year. Unlike carrybacks, these current losses aren't a choice for companies, according to DiFronzo.

The decision "is being made for them by the current economy," he said.

Noren, of McDermott Will, noted that companies that took an unexpected financial hit this year are facing a GILTI regime that is "very tough on losses."

He added, "If you have a U.S. net operating loss, you effectively have to apply that loss to your GILTI inclusion without getting the Section 250 deduction, so that's pretty harsh."

Companies aren't just contending with domestic losses. They also have to deal with offshore affiliates that took a hit, and a related reduction to foreign tax credits.

Once again, the issue goes back to GILTI's mechanics. The measure uses a term called tested loss, which involves a corporate shareholder's basis in assets in a controlled foreign corporation.

Tested loss is beneficial in that it reduces tested income that's in another affiliate, which ultimately lowers the net GILTI inclusion, according to Murillo of EY. At the same time, tested losses reduce the amount of foreign tax credits that the U.S. company is able to claim, he said.

"If the entity that is incurring the tested loss itself pays foreign taxes … then you get no credit for those taxes," Murillo said, adding that this situation gives rise to "stranded foreign taxes."

Many companies that are experiencing financial losses related to the pandemic are finding that they may have to rethink their offshore structures. Noren noted that even consistently profitable companies are suddenly having to contend with different loss scenarios for the first time.

"That's something that companies are starting to wake up to," he said. "I think it'll be a big focus for international tax planners going forward."