The package of relief measures the European Union plans to disburse to help member countries overcome the devastating economic impact of the coronavirus can serve as a blueprint in future crises, the European commissioner for the economy said Tuesday. 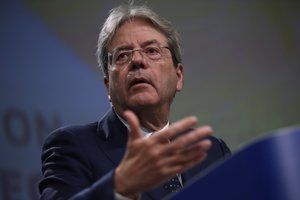 Paolo Gentiloni, the EU tax commissioner, said if the bloc makes a success of its fiscal response to the coronavirus pandemic, it will strengthen the argument for collective European responses to future problems. (AP Photo/Francisco Seco)

Paolo Gentiloni, speaking at a virtual conference held by the CEPS think tank, told delegates that the European Parliament and the representatives of the bloc's 27 member countries need to redouble their efforts to reach an agreement on the EU budget. If the European Union makes a success of its fiscal response to the coronavirus pandemic, it will strengthen the argument for collective European responses to common problems in the future, he said.

The European Commission has been authorized by EU members to raise money on international markets to fund the €750 billion ($887 billion) recovery package, and the European Parliament and representatives from EU member countries are currently negotiating on a budget. This will be the first time the EU has raised its own capital on international markets, and progress has been slow as crucial issues remain to be resolved.

"If we make a success of it, we will have laid the groundwork and provided a blueprint for how to tackle downturns in the future," Gentiloni said. The parties to the negotiations, he said, "must redouble their efforts to close the deal on the [EU budget] without further delay,"

Three key issues remain in the discussions: the new revenue streams and quasi-tax measures that will be used to raise revenue at the EU level, which are known as "own resources" in EU jargon; the rule-of-law conditions attached to the receipt of recovery funds; and budget ceilings and ratios.

Poland and Hungary — both of which are often accused of backsliding into authoritarianism — have reservations about making respect for the institutions of liberal democracy a condition for receiving EU money.

Negotiations between the Parliament and the representatives of the bloc's members continue this week.