Poland and Hungary on Monday blocked the adoption of the European Union's long-term budget over a provision that ties receipt of bloc funds to respect for the rule of law, a senior European diplomat told Law360. 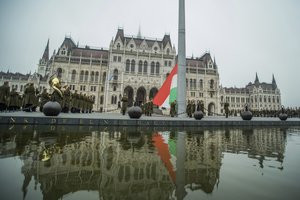 Hungary, along with Poland, scuttled the adoption of the European Union's budget Monday. (Zoltan Balogh/MTI via AP)

The ambassadors voted on three elements of the budget: the rule of law provision; the level of funding for various EU programs, which includes the €750 billion ($888 billion) coronavirus recovery fund; and the mechanism for funding the bloc's spending.

Poland and Hungary — both of which are frequently accused of democratic backsliding — opposed all three provisions. The rule of law conditionality and the budget funding levels both passed, as they require only a majority of members to approve. The funding mechanism requires unanimity, and all three elements needed approval for the budget to move forward.

The senior European diplomat, who asked not to be named due to the sensitive nature of the meeting, told Law360 that the Polish and Hungarian delegations voted against all three elements, but raised no objection to the substance of the budget or its funding mechanism aside from the rule of law condition.

The conditionality mechanism allows the bloc to protect its budget when it is established that a member country's violation of democratic principles seriously risks affecting the sound financial management of the EU budget or the protection of the financial interests of the EU.

The determination of what contributions and quasi-tax measures would feed the bloc's budget — the aspect of the budget that required unanimity and therefore allowed Poland and Hungary to torpedo it — was meant to be dealt with in detail next year. Only an agreement in principle was on the table for Monday's meeting.

The three elements of the total package were agreed to last week by negotiating teams made up of representatives from the European Parliament on one side and the representatives of the member countries on the other.

There was sharp criticism — generally leveled at the Parliament for holding up negotiations, risking the budget not being agreed on in time to gain the assent of the national parliaments of all 27 EU countries.

Members of the European Parliament reacted with outrage at Monday's news.

Manfred Weber, the chairman of the right-wing European People's Party Group in the European Parliament, criticized the Polish and Hungarian governments' veto. If their leaders want to stop Europe's citizens benefiting from the pandemic relief contained in the budget, they need to be prepared to explain this to the "millions of workers and business owners" that it will benefit, Weber said.

"The rule of law debate is not about one country, or about East and West. The mechanism is neutral and applies to everybody in the same way," Weber said, "The Hungarian and Polish governments should stop creating this fictional opposition between themselves and the values that are part of our treaties,"

From the other side of the political spectrum, Belgian Socialist Kathleen Van Brempt said, "We really cannot tolerate the fact that there are member states within the union that are sliding into dictatorship."

She further said it would be crucial to reach agreement this month, noting that the budget must be approved by the European Parliament in December.

The Polish and Hungarian governments could not be reached for comment.

Update: This article has been updated with additional comments.