The economic fallout of the novel coronavirus pandemic has prompted calls to tax the excess profits of the relatively few companies that have seen a windfall, reigniting a debate around a measure that was last used during World War II. 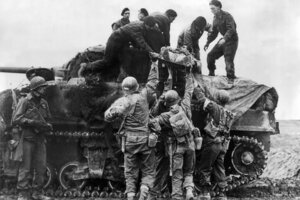 Several countries used an excess profits tax during both world wars. During a combined British-American drive across open country in Germany, American medical corpsmen pick up a wounded man and place him aboard a British tank for transfer to a safe area on Nov. 27, 1944. (AP Photo)

Global efforts to reduce the spread of the virus, which causes the respiratory disease COVID-19, have saddled most companies with unforeseen financial losses. At the same time, 32 corporations from around the world were projected to collectively make $109 billion more in 2020 than in previous years, according to a September report from Oxfam International. Topping the list are U.S.-based tech giants that have benefited in part from the shift toward remote work during the pandemic, the report said.

These numbers have prompted Oxfam and others to advocate for the revival of an excess profits tax. The measure, which was used by several countries during both world wars, is designed to target above-average returns that companies see solely due to an external crisis. The U.K. government is considering bringing back the tax during the pandemic, according to reports earlier this month from the British newspaper The Sunday Times, which cited leaked emails.

The tax had critics decades ago who argued — as some do now — that the measure would discourage the kind of innovation most needed during challenging times. Meanwhile, advocates of the tax have claimed that many corporations with excess returns merely have business models that allow them to benefit from the circumstances without necessarily providing additional value.

The fundamental extra profit that Amazon.com Inc., Google LLC or Facebook Inc. is earning right now has nothing to do with investment in research and development, according to Reuven Avi-Yonah, a tax professor at University of Michigan Law School. These companies, he said, just happen to be providing the kind of service that is more in demand when everyone's sitting at home.

"I don't think this is something that they have contributed to," he said. "And therefore, I think that it is perfectly justified to tax most of that profit away."

The Mechanics of the Tax, Then and Now

Several countries used an excess profits tax during both world wars, including the U.S., the U.K. and Canada. Most recently, the U.S. enacted the tax in 1940 and amended it throughout World War II before repealing it in 1950, according to an article published in The American Prospect in March 2020 by Avi-Yonah.

An excess profits tax today would start with a company's net income for 2020, subtract a credit for average earnings from 2016 through 2019, and provide an 8% credit for research and development, he wrote. The measure would then apply a 95% tax rate to the excess profits, and the resulting tax can be reduced by credits for wages for additional employees hired in 2020 "to encourage the winners to hire and pay well during the recession," Avi-Yonah wrote.

Critics of the measure have raised issues with the notion of separating excess profits from normal ones. Such concerns were expressed in a report that argued against reviving the tax for the Korean War, published in 1950 by the Tax Foundation, a conservative-leaning economic think tank in Washington, D.C. The report quoted former U.S. Treasury Secretary Fred Vinson, who in 1946 claimed that normal and excess profits look alike.

"There is no chemical reagent to distinguish them," Vinson said during a hearing about the tax.

The challenge of separating out excess profits during a war would also be an issue during the pandemic, Garrett Watson, senior policy analyst at the Tax Foundation, told Law360. There can be supernormal returns that are derived from innovative activity, particularly in times of transition, such as a war or pandemic, he said.

Using the tax to separate out those profits from excess returns that aren't related to innovative activity "is actually quite difficult," Watson said. "You're targeting all sources of excess profits when you're levying this tax."

Another challenge is to actually get at what an excess profit is, he said.

"Normal rates of return across different industries may vary, and administratively it requires firms to separate out what could be considered excess profit in their given situation, which can lead to a lot of complexity," Watson said.

But as Avi-Yonah saw it, the idea behind the tax when it was used during the world wars — and his proposed revival — is that the measure's formula wouldn't require an investigation into the source of any particular profit.

Rather, that tax works "to essentially assume that any increase in profit during the pandemic year would be due to this extra circumstance of the pandemic," he told Law360. "That is measured by the profit over and above the average profit of the last few years."

The tax was successfully administered in the U.S. and other countries during World War II, and "I think that it can be administered effectively here as well on the same basis," he said.

The debate about the relationship between the tax and innovation stretches back to at least 1919, when Carter Glass, the Treasury secretary at the time, wrote about the measure following its repeal after World War I. Glass' writing, cited in the 1950 Tax Foundation report, claimed the tax puts "a penalty on brains, energy and enterprise."

As Watson saw it, excess profits have accrued to companies that delivered additional value during the pandemic, such as improved technology for people working remotely and safe ways to deliver goods and services. Taxing an excess return that's related to a new way to provide goods or services may end up disincentivizing companies from exploring similar opportunities relative to less risky endeavors, he said.

These excess profits "are providing a pretty strong signal for firms to compete to provide whatever goods or service is generating that profit," he said.

In addition, Watson said that while providing a credit for R&D "makes sense in the context of this proposal," innovation that may create higher returns often goes beyond research and development costs.

According to Avi-Yonah, some companies — particularly those in the pharmaceutical industry — shouldn't be disincentivized during the pandemic. If the tax were enacted, it could be written to exclude them, he said.

"In general, a tax like that can be formed in such a way as to create the correct incentives," Avi-Yonah said, citing the tax's proposed credit for the wages of new employees.

Meanwhile, for a company like Amazon, extra profits aren't due to investment but instead an increased demand for online shopping during the pandemic, he said.

For Amazon's part, the company announced earlier this month that it invested more than $11.5 billion in COVID-related initiatives in 2020, including more than $961 million on "safety measures such as temperature checks, masks, gloves, and enhanced cleaning and sanitization." Amazon also paid about $1.7 billion in federal income taxes, according to the statement.

D.T. Cochrane, an economist with Canadians for Tax Fairness, co-authored a study published in December that found 34 large Canadian corporations had record high profits during the first three quarters of 2020. These companies included large retailers that appeared to benefit from the fact that people are making food at home more, Cochrane told Law360.

The range of companies that profited during the pandemic was broader than expected, he said, and the study raised questions about "where money is flowing to, the reason it's flowing to these different areas, and how it is pooling with certain beneficiaries and not others."

As Cochrane saw it, the additional profits aren't connected to innovation.

"The argument in favor of profit is that it spurs innovation," he said. "And I think you would be hard-pressed to point to some specific innovation that's being rewarded in the case of these hyper-profitable companies."

Beyond the question of whether innovation is the source of profits during the pandemic, some supporters of an excess profits tax have cited research showing that above-average returns go mainly to shareholders, rather than to research and development.

For the 32 companies that collectively made $109 billion more in 2020 than in previous years, the excess profits "would not be a problem if they were widely shared and benefited the rest of society," according to the September Oxfam report. However, the report's authors found that these companies are expected to distribute 88% of their excess profits to shareholders who predominantly belong to higher-income groups.

In theory, profits could drive innovation and create value in the economy, but only if those profits are reinvested in workers and in productive capacities, according to Nicholas Lusiani, a senior adviser on corporate advocacy at Oxfam America and a co-author of the report.

The lion's share of the profits is going directly to shareholders, a situation that not only exacerbates inequality, but also "warps incentives" among senior executives who are major shareholders, Lusiani said.

"In their incentive structure, their calculus of making decisions … their own personal pay is being determined by share price and the earnings translated into dividends," he said. "I think it's an open question whether that incentivizes good business, and innovation, and reinvesting in the company or it incentivizes actually just pulling it out and cashing out."

An excess profits tax wouldn't be a silver bullet if it were enforced, Lusiani said, but it could be part of a larger toolbox.

For critics of the measure, the tax shouldn't be part of the toolbox at all.

As Watson saw it, if companies are generating excess profits that aren't related to any value they created, "there are probably better tools than tax to deal with that."

For example, he said, there's an ongoing debate about whether antitrust enforcement and other nontax measures could be used "to try to ensure that we don't have a situation where there are permanent abnormal profits just because of market power and related issues."

Meanwhile, there has been growing momentum, including in the U.K. and France, to tax some of the income from large tech companies without a physical presence in their borders. These efforts began before the pandemic, which only increased pressure to tax these types of businesses.

In the U.S., Maryland this month created the nation's first tax on digital advertising after the state Senate joined the House of Delegates to override the governor's veto of the measure last year. Sen. Jim Rosapepe, D-Prince George's, said at the time that lawmakers believed that Big Tech must "pay its fair share."

"I've got good news," he said. "Not everybody is suffering during this pandemic."