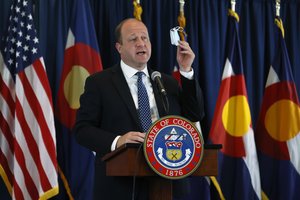 In a unanimous decision reversing a district court ruling, the justices found that Democratic Gov. Jared Polis' May 15 order violates the state constitution's requirement that ballot petitions are signed "in the presence of the petition circulator." The justices said the requirement could not be circumvented by executive order under the state's Disaster Emergency Act.

"The Colorado Disaster Emergency Act authorizes the suspension of certain statutes, rules, and regulations, but not of constitutional provisions," the justices said.

The decision sides with the order's opponents, University of Denver Chancellor Emeritus Dan Ritchie and business coalition Colorado Concern. They asked a district court in May to find the order's suspension of in-person collection requirements unconstitutional and bar Jena Griswold, the Colorado secretary of state, from acting on it.

The order by Polis suspended the law requiring in-person signature collection for ballot initiative campaigns and directed the secretary of state to create temporary rules allowing collection of signatures with email or mail options. The order also directed the state Department of Public Health and Environment to work with Griswold to develop guidelines allowing safe in-person signature gathering.

Among the initiatives currently approved for circulation are Initiative 271, which would create a graduated state income tax instead of the state's current flat tax rate of 4.63%, and Initiative 306, which would lower the corporate and individual income tax rate from 4.63% to 4.55%.

The district court denied a request for injunction against the order, but the justices found that the state's constitution required in-person signatures to prevent error or fraud.

The state deadline for submitting ballot petition signatures is Aug. 3.

The Colorado decision is the latest blow to petition campaigns that have struggled to conduct signature-gathering efforts as usual while maintaining safety precautions and abiding by public health measures to combat the coronavirus. Ballot-gathering campaigns were suspended in Nebraska and Arizona over health concerns for staffers and the public. In Montana, supporters of two proposed ballot measures for legalizing and taxing recreational marijuana began collecting signatures following a court ruling denying electronic collections.

Christopher Murray and Sarah Mercer of Brownstein Hyatt Farber Schreck LLP, who represent Ritchie and Colorado Concern, told Law360 that the justice's ruling was narrow and that arguing for the constitutional requirement was not opposed to public safety or signature gathering efforts.

"Especially in times of emergency, and I really mean this, people need to have some certainty in the rule of law and that means if you put something in the constitution, it's less flexible," Murray said.

Mercer said that the opponents of the order are supportive of Polis' other actions addressing the pandemic and the decision did not more broadly restrict the governor's authority under the Colorado Disaster Emergency Act.

"The court found that even in a time of pandemic, the language of the constitution can't be changed by the governor," Mercer said. "This decision, in the spirit in which the case was brought, really applies solely to this order."

Colorado Concern President and CEO Mike Kopp said in a statement to Law360 that the group was glad about the court's decision.

"Yes, the executive has emergency powers in a public health crisis, but those powers do not come at the expense of fundamental rules that protect the integrity of our laws," he said.

In a statement shared with Law360, Polis said the decision was a blow to the power of Coloradans but was convenient for some groups and elected leaders to face fewer ballot initiatives.

"It makes my life easier as governor that there will be fewer curveballs coming our way, but sadly it's at the cost of making it much harder and even dangerous from a public health perspective for activists on all sides to get their issues on the ballot for voters to decide," Polis said.

Betsy Hart, director of communications for Griswold, said in an email to Law360 that the secretary was reviewing the decision in consultation with the state attorney general's office.

"Our office will comply with all court orders and will continue to work with petitioners to ensure their legal access to the ballot," Hart said.

The state attorney general's office, which is representing Polis and Griswold, could not be reached for comment.