New Jersey business groups pushed back Tuesday against the governor's proposed budget seeking tax increases on millionaires and corporations, before a legislative committee heard projected revenue could come in at nearly $1.4 billion above the administration's estimates. 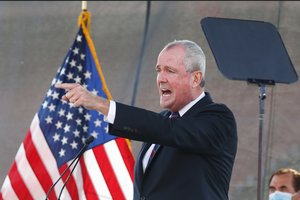 Democratic Gov. Phil Murphy's call to raise $863 million in taxes, including increasing taxes on millionaires and businesses with profits of $1 million or more, would reduce the competitiveness of the state's tax climate, heads of the New Jersey Business and Industry Association and the New Jersey Chamber of Commerce said.

Michele Siekerka, president and CEO of the business association, and Tom Bracken, president and CEO of the chamber, said at a news event with other business groups that the tax hikes should be scrapped because the budget's proposed increase to the state's surplus is roughly equal to the amount of raised taxes. The groups also urged lawmakers to reject Murphy's request to borrow about $4 billion for the fiscal year 2021 spending plan.

"A fiscally responsible budget demands a reduction, if not elimination, of the $5 billion in proposed new revenue from new taxes and borrowing," Siekerka said in a statement after the event.

The proposed budget would raise the income tax rate on those making more than $1 million annually from 8.97% to 10.75%, the current rate for those with incomes higher than $5 million. The budget would also permanently increase the 1.5% surtax on businesses with profits of at least $1 million to 2.5%, starting in tax year 2020. The surtax dropped to 1.5% from 2.5% on Jan. 1, and is slated to expire in 2022.

Beginning in tax year 2021, the budget would also impose a 5% surcharge on federally qualified business income for owners of pass-through businesses with income greater than $1 million who are eligible for a 20% deduction under the 2017 Tax Cuts and Jobs Act

. Additionally, the budget seeks to increase taxes on cigarettes, impose an excise tax on firearms, restore a sales tax on limousine services and remove a sales tax cap on boats.

Moreover, the budget would levy new assessments on opioid drug manufacturers and wholesalers and raise the annual assessment on net written premiums of health maintenance organizations to 5% from 3%.

"This budget drives more nails into the business coffin," Bracken said in a statement.

Later in the day, representatives from the state's Office of Legislative Services told the Senate Budget and Appropriations Committee that the office's revenue forecast through next June is $1.37 billion higher than projections from the state Department of the Treasury.

According to testimony the office provided to the committee, the chief difference between the two estimates resulted from the office assuming income withholding payments will roughly equal those from the previous fiscal year, whereas the state treasury projects a 3% year-over-year drop.

David Drescher, senior fiscal analyst at the office, told the committee that income tax withholding payments didn't drop as starkly as initially expected, which he attributed to most of the unemployment amid the spread of the novel coronavirus being concentrated in low-wage sectors.

Overall, the office projects gross income tax revenue to come in at nearly $877 million over the state treasury's figures, in addition to sales tax and corporation business tax revenues exceeding the treasury's estimates by $227 million and $280 million, respectively.

Martin Poethke, director of the treasury's Office of Revenue and Economic Analysis, responded to the committee that he wasn't comfortable with the higher revenue figures. Poethke said he believed the legislative office's outlook on future estimated payments, a large driver for its projections, was too rosy given the 5% decline that economists have pegged for the national economy in 2020 amid the spread of COVID-19, the respiratory illness caused by the virus.

Committee Chair Sen. Paul Sarlo, D-Wood-Ridge, asked the two agencies to reconcile their differences between their budget projections to give lawmakers a crisper picture of the state's financial outlook before they fashion a budget by Oct. 1 for the upcoming nine-month period. New Jersey's fiscal year normally begins July 1, but the state pushed the start date back three months to give officials time to take stock of the harm the virus caused its cash flow.

Regardless of how the final projections shake out, business groups are primed to push back against the budget's tax provisions.

Testimony that the New Jersey Business and Industry Association released Tuesday and submitted to the committee on Friday said the budget would give New Jersey the highest corporate business tax rate in the nation after Iowa phases down its current rate in 2021. New Jersey is also the only state exploring a surcharge on qualified small business income, according to the testimony.

While presenting to the committee, state Treasurer Elizabeth Muoio said Murphy "remains committed to tax fairness" by seeking to have certain businesses and individuals with resources to weather the pandemic to pay more in taxes to assist others who face a tougher road to recovery.

Sen. Steve Oroho, R-Sparta, the Republican budget officer, asked Muoio if the administration considered the competitiveness of New Jersey's tax climate while it drafted the proposed spending plan. Muoio responded that data has shown that New Jersey was No. 1 in its region for new business startups and has doubled its number of millionaires since 2004.

"We need, as a state, sustainable revenue sources," she said of the proposed tax increases on high-earning individuals and businesses.

Murphy's office did not immediately respond to questions.