As the coronavirus pandemic rages on, and state revenue declines, states looking for savings are increasingly challenging the credits and incentives handed out to companies in exchange for promised jobs, as well as casting a critical eye on new deals. 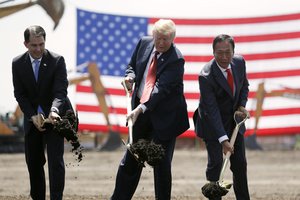 In June 2018, President Donald Trump, Wisconsin Gov. Scott Walker, left, and Terry Gou, founder of Foxconn Technology Group, took part in a groundbreaking ceremony for a Foxconn facility in Mount Pleasant, Wisconsin. The project was later downsized, and this month the state said Foxconn was not eligible for a $4.5 billion incentive package. (AP Photo/Evan Vucci, File)

The economic hit to states' coffers caused by COVID-19 is intensifying a trend with regard to tax incentives that was already taking place. Namely, states are scrutinizing the terms of deals already made to see that corporations are satisfying their part of the bargain. And they are putting a strong focus on transparency, which has allowed the public to glimpse the details of deals that once would have been behind the scenes. That follows the collapse of Foxconn's deal in Wisconsin, Ohio's clawback of $28 million in incentives from General Motors and the scathing reports issued by a New Jersey task force over giveaways by that state's Economic Development Authority.

Those are glaring examples, but amid the pandemic, businesses need to be extremely careful about the differences between what they promise and what they can deliver, Robert Calafell, credits and incentives leader at RSM US LLP, told Law360.

"That sort of enforcement activity where states are looking at these agreements and really taking a hard measure against company commitments, and in many instances are actively seeking repayment for reduction [of jobs], that has notably increased over the past four months," Calafell said.

States could not have predicted the pandemic or the effect it would have on their coffers, but when it comes to credits and incentives, they entered the pandemic with some knowledge about how to proceed. Especially in the last five to eight years, states have increasingly focused on whether they are getting the right bang for their buck when awarding incentives. As a result, most states now have some kind of system for evaluating incentives, and then making a decision as to whether they should continue with an incentive, modify it or kill it.

That process flowed from another economic downturn, the Great Recession, said Ellen Harpel, founder of the consulting firm Smart Incentives. In response to the recession, states wanted to create the "maximum number of jobs and maximum investment," but as the recession receded, states' incentive focus did, too, she said.

"We have seen in the last past several years … [states] spending more effort to look into the nature of jobs, who is benefiting," Harpel said. "So we have already seen that shift, and I think it will accelerate."

As a result, states are accumulating important data as they consider deals with individual companies, including whether to put in clawback provisions, and under what circumstances to claw back.

Clawback provisions are nothing new, Tim Schram, credits and incentives leader at BDO US LLP, told Law360. But the degree to which states are enforcing them is a more recent development.

"They haven't always been enforced uniformly. And now that's no longer the case. Because of transparency, because of the public scrutiny of incentive deals, there's a lot more teeth in recapture provisions," said Schram, using the term tax professionals use when discussing clawbacks.

The pandemic has added some anxiety, too, Schram said, because companies are concerned that amid a downturn, they may not be able to fulfill obligations they made when times were better. But he said it had been his experience that especially if a company is having a problem related to the pandemic, states have been willing to work on a mutual plan. Delaware, Michigan, Nebraska and New Jersey are among states that have made specific provisions for working with companies that may not meet targets due to the pandemic.

States are scrutinizing incentive agreements for reasons that include their awareness that they, too, are under scrutiny — from taxpayers. Some states are working with established consultants and groups, including the Pew Charitable Trusts, Smart Incentives and the Center for Regional Economic Competitiveness on best practices for handling incentives in general, and now specifically amid the pandemic.

According to a white paper from the CREC and Smart Incentives, state economic development organizations have adjusted incentive agreements, programs and operations to address the economic threats posed by the COVID-19 downturn.

"The growing demand for incentive project accountability combined with the legislative push for more formal incentive program evaluations means that EDOs will likely be called up to explain why changes were made and what those changes accomplished," the paper said.

Ken Poole, president and CEO of the CREC, told Law360 one of the big changes that his group is recommending to states is to turn the incentive process around 180 degrees. He said what that means is, the company performs, then it gets its incentive, as opposed to the company getting its incentive and then performing.

That was exactly the approach taken by Connecticut Gov. Ned Lamont, a Democrat, when he unveiled his legislative proposals early this year. S.B. 9, a bill based on the governor's proposals, would have moved the state to what the governor called a "performance-based, earn-as-you-grow" system.

The program, which would have also allowed certain businesses that created 25 or more full-time jobs in the state to keep 25% of withholding taxes from new employment for seven years, was mainly focused toward keeping Connecticut-based businesses in place, and was a counter to the policies of Lamont's predecessor, Dannel Malloy. Malloy's administration was excoriated by the Legislature's bipartisan Auditors of Public Accounts for mishandling business grants and loans.

Lamont's bill died in committee, but businesses in the state were encouraged that he wanted to do something for them, William Kambas, tax partner with Withers, told Law360.

"What that signaled to me was a desire to keep companies here," said Kambas, a Connecticut resident. "I think our governor has attempted to be sensitive to being pro-business."

Kambas and Eric Tresh, tax partner at Eversheds Sutherland, both said that even in a changing climate, tax incentives will remain an important tool for states to remain competitive for economic development projects. Tresh said he was also seeing local government interest in providing incentives to be as strong as it ever was, and perhaps even greater recently.

"I think some local governments are of the view, and I think correctly, that offering incentives is a way to distinguish themselves," Tresh said.

Still, states and localities should watch what is happening around the country and think twice, said Greg LeRoy, executive director of the advocacy group Good Jobs First. The group has long crusaded against the use of all kinds of tax incentives and considers them little more than corporate welfare.

"States are losing a ton of money and they are also spending more on public health" amid the pandemic, LeRoy said. "They should look hard at incentives and clean house. That's money being wasted."