A Louisiana task force created by the governor for coronavirus pandemic recovery ideas recommended sweeping tax changes Friday, including eliminating the corporate franchise tax, broadening the sales tax base while lowering rates and waiving or reducing penalties in tax disputes. 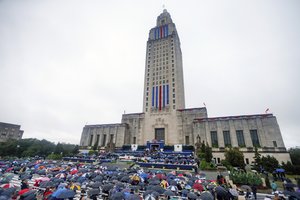 The Resilient Louisiana Commission also recommended addressing how the state handles net operating losses, raising the gas tax, streamlining sales tax collections and expanding existing tax incentives. The tax recommendations were part of a broader set of packages, made amid the pandemic "to determine ways the state can better protect itself against disruptions, such as public health emergencies and natural disasters," according to a news release accompanying the report.

More than 300 people and 15 task forces on the Resilient Louisiana Commission produced the report over a period of months, including Kimberly Robinson, the state's secretary of revenue.

"To attain more resilience, our state needs appropriate levels of funding to provide for adequate public services and foster widespread, attainable opportunities for its people," Robinson said in a statement. "A fair and balanced tax structure can help us achieve this goal."

Byron Henderson, a spokesman for the Louisiana Department of Revenue, told Law360 that the agency will continue reviewing all the fiscal and economic recommendations in the report amid discussions with Democratic Gov. John Bel Edwards, state lawmakers and other interested parties. He said it is too soon to "discuss the specifics of implementing any particular set of recommendations."

However, the recommendations in the report are consistent with other efforts to reform Louisiana's tax code, particularly amid the pandemic. For example, in July, Edwards signed a package to expand incentives and to provide casinos with a deduction for revenue derived from promotional play wagers as a way to offer businesses tax relief. Also that month, Louisiana temporarily suspended a portion of the franchise tax for businesses with up to $1 million in taxable capital.

Consideration of eliminating the corporate franchise tax in Louisiana, which also has a corporate income tax, is a longstanding issue in the state.

Eliminating the franchise tax for all businesses "is a big deal," Jason DeCuir, co-owner and partner at the tax consulting firm Advantous Consulting LLC, told Law360. "It needs to happen here in Louisiana."

Streamlining sales tax collections is also an ongoing theme. DeCuir is the chair of a study group pushing for a constitutional amendment to centralize sales and use tax collection. On Monday, that group officially adopted its recommendations for state lawmakers.

Regarding the recommendation to address net operating losses, DeCuir noted that in 2016, Louisiana prohibited the amount of NOL deduction from exceeding 72% of Louisiana net income. Businesses would like to reform that, he said, because the change was originally to be temporary but now has become permanent, even as other temporary measures adopted alongside it have sunsetted.

"I don't know of any other states that do it that way," DeCuir said. "Let's try to figure out how to stabilize this."