Washington state should offer $1.7 billion in unemployment insurance tax relief for businesses struggling with mass layoffs due to the COVID-19 pandemic, the governor said in his inauguration speech Wednesday outlining his agenda for his third term. 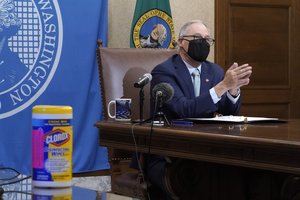 "We want community-minded entrepreneurs to continue to pursue their dreams in this new world, and we're going to keep helping them," Gov. Jay Inslee said. (AP Photo/Ted S. Warren)

In a prerecorded speech to the state Legislature, Democratic Gov. Jay Inslee said that he would work to reduce increases to the state unemployment tax on businesses to grant a reprieve from the struggles of mass unemployment and to work with legislators "to get more money into people's pockets."

"We want community-minded entrepreneurs to continue to pursue their dreams in this new world, and we're going to keep helping them," Inslee said.

The governor's proposal would adjust the unemployment insurance tax formula to spread rate increases over five years and waive employer charges related to benefits given during the state's stay-at-home orders, Inslee spokesperson Mike Faulk said in a statement to Law360. The proposed changes would reduce the state's total insurance tax collections by an estimated $596 million for 2021 and $1.1 billion from 2022 through 2025.

Left unmentioned in the speech but related to Inslee's plan to reduce unemployment burdens on Washington businesses is the governor's renewed proposal for a capital gains tax. In a statement issued Monday, Inslee called for the tax as a way to fund a cut to unemployment insurance tax for small businesses and to support the Working Families Tax Credit — the state's earned income tax credit program.

In his budget proposal released in December, Inslee called for a 9% tax on capital gains earnings over $25,000 for individuals and $50,000 for joint filers. If approved, the tax would raise about $1.1 billion in fiscal year 2023 and more than $2.4 billion for the 2023-2025 biennium, according to the proposal.

The December proposal also calls for easing or adjusting the unemployment insurance tax rate. According to a forecast issued by the state Employment Security Department in November — the latest month available — the average state unemployment tax rate is expected to increase from 1.03% to 1.7% in 2021 and 2.6% by 2022.

Both the state House of Representatives and the Senate are controlled by a Democratic majority. The Senate Ways and Means Committee will hold a public hearing Thursday to consider legislation put forward by the chamber's Democratic leadership, S.B. 5096, that would impose Inslee's capital gains proposal.

A capital gains tax proposal has come up every year in Washington in recent years. To date it has not gotten far because of the state's lack of a personal income tax; Inslee pushed for the tax in 2019 in his budget, but it did not make it into the final version.

Critics of the proposal have raised concerns that the capital gains tax is an income tax that requires a constitutional amendment, rather than legislation, to become law. Washington voters have rejected income taxes at the ballot box numerous times and state tax activists have floated a ballot measure to prohibit any tax on personal income, including capital gains income.

House Democratic Majority Leader Pat Sullivan, D-Covington, was more supportive of the governor's proposal, previously telling Law360 the House's version of the budget for the past few years has included proposals for a capital gains tax. He also noted that he expected litigation should the tax be created.

Senate Majority Leader Andy Billig, D-Spokane, said in a statement to Law360 on Thursday that the state's tax structure is broken and "among the most regressive in the country."

"All options should be on the table to fix it," Billig said. "We have the chance to not only repair our broken tax structure, but also make investments in things like affordable child care, early learning, public health and environmental improvements."

"Income-based taxes are highly volatile and would make funding for schools, health care and social services unstable and unpredictable," Stokesbary said. "However convenient of a political target they may be, taxing investments and innovators is a sure-fire way to hamper our state's recovery."

Stokesbary told Law360 that he agreed with parts of Inslee's proposed methods for reducing the unemployment insurance tax and that the administration is working with the Legislature to quickly address the issue.

He also plans to sponsor legislation that would devote $200 million from the state's rainy-day fund to the Working Families Tax Credit, a program that has been unfunded since before he took office in 2014.

"I don't think it's an insurmountable obstacle, and I think it's something we can fund, even without having to tax other people to pay for it," he said.

House Democratic leaders did not respond to requests for comment.

Update: This story has been updated with comment from Billig.