Illinois House Republicans urged the governor Friday to backtrack from his initiative to decouple the state's tax code from certain small-business-friendly provisions in a federal pandemic aid law, arguing the plan could financially cripple struggling companies. 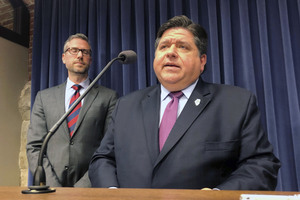 Illinois Gov. J.B. Pritzker has doubled down on his decoupling plan after a bill failed to pass the Democratic-controlled General Assembly on Jan. 13. (AP Photo/John O'Connor)

could limit the ability of 400,000 businesses to recover from the pandemic, Republicans said at a news conference.

"I cannot adequately express how damaging this is going to be for our struggling small businesses, so many of which are on the brink of collapse," Rep. Mike Murphy, R-Springfield, told reporters.

Although a decoupling bill spurred by the governor failed to pass the Democratic-controlled General Assembly in the waning hours of Illinois' lame-duck session on Jan. 13, Pritzker has doubled down on the plan and asked lawmakers to reconsider the bill during the current session before taxes are due. The governor has promoted the measure as a way to help close a $3.9 billion general fund shortfall for fiscal year 2021, which ends July 1.

As a rolling conformity state, Illinois automatically picked up certain tax changes in the CARES Act. Among those were provisions that allowed taxpayers to carry back NOL losses to 2018 through 2020 and suspended the 2017 Tax Cuts and Jobs Act

Pritzker's plan called for decoupling from the NOL provisions as well as the CARES Act's suspension of the caps — $250,000 for individuals and $500,000 for joint filers — on noncorporate losses used to offset nonbusiness income. He has said that the bill would affect only owners of pass-through entities such as S corporations and limited liability companies.

Initially, the governor's office estimated that the plan would save the state $500 million. However, the Republicans told reporters that during floor debate on the bill, some estimates showed it could actually prevent a loss of up to $1.4 billion in tax revenue for Illinois.

The Republicans said that Illinois should shy away from passing what they called a significant change to the tax law with the March 15 tax return deadline for S corporations less than two months away.

Illinois' legislative session is on hold because of the pandemic. Lawmakers are slated to return in February, which could leave taxpayers with little time to plan for any potential alterations to the tax law, said Rep. Steve Reick, R-Woodstock.

"The clock is running on this, and it's running very fast," he said.

The Republicans also questioned why Illinois didn't act sooner to address the CARES Act when other states moved to address conformity to the federal law as early as May.

Asked what other steps lawmakers could take to shore up the budget without passing a tax increase, the Republicans said that they were still waiting on figures from Pritzker's office about how much money the state would save from his requested 6.5% cuts to certain departments.

At a news conference later in the day, Pritzker defended the plan, saying that 26 states have already decoupled from the federal law in addition to the nine states that he said were automatically decoupled from it.

"So, it's really, actually a fairly standard movement by states to make sure that they're decoupling, and we're going to do the same," he said.

Pritzker added that Republicans haven't put forth any spending cuts that would balance the budget, and that ripping up the decoupling proposal could blow about a $500 million hole in next year's budget.

A Pritzker representative did not respond to additional questions from Law360.

Todd Maisch, president of the Illinois Chamber of Commerce, told Law360 that the decoupling plan would reach many small businesses in Illinois, as most of them are pass-through entities.

He said that the CARES Act was negotiated with bipartisan support to assist businesses that are struggling amid the spread of COVID-19, the respiratory illness caused by the virus, and that Illinois would end up hurting rather than helping them financially if the plan is enacted.

"We think that it is a terrible idea at a terrible time," Maisch said, adding that the governor should "recognize that this is something that the business community really needs."

"The best thing he could do is take this proposal off the table," Maisch said.

The office of Rep. Michael J. Zalewski, D-Riverside, who introduced the plan in the lame-duck session, did not respond to a request for comment.

A representative of House Speaker Emanuel Welch, D-Westchester, could not immediately be reached for comment.